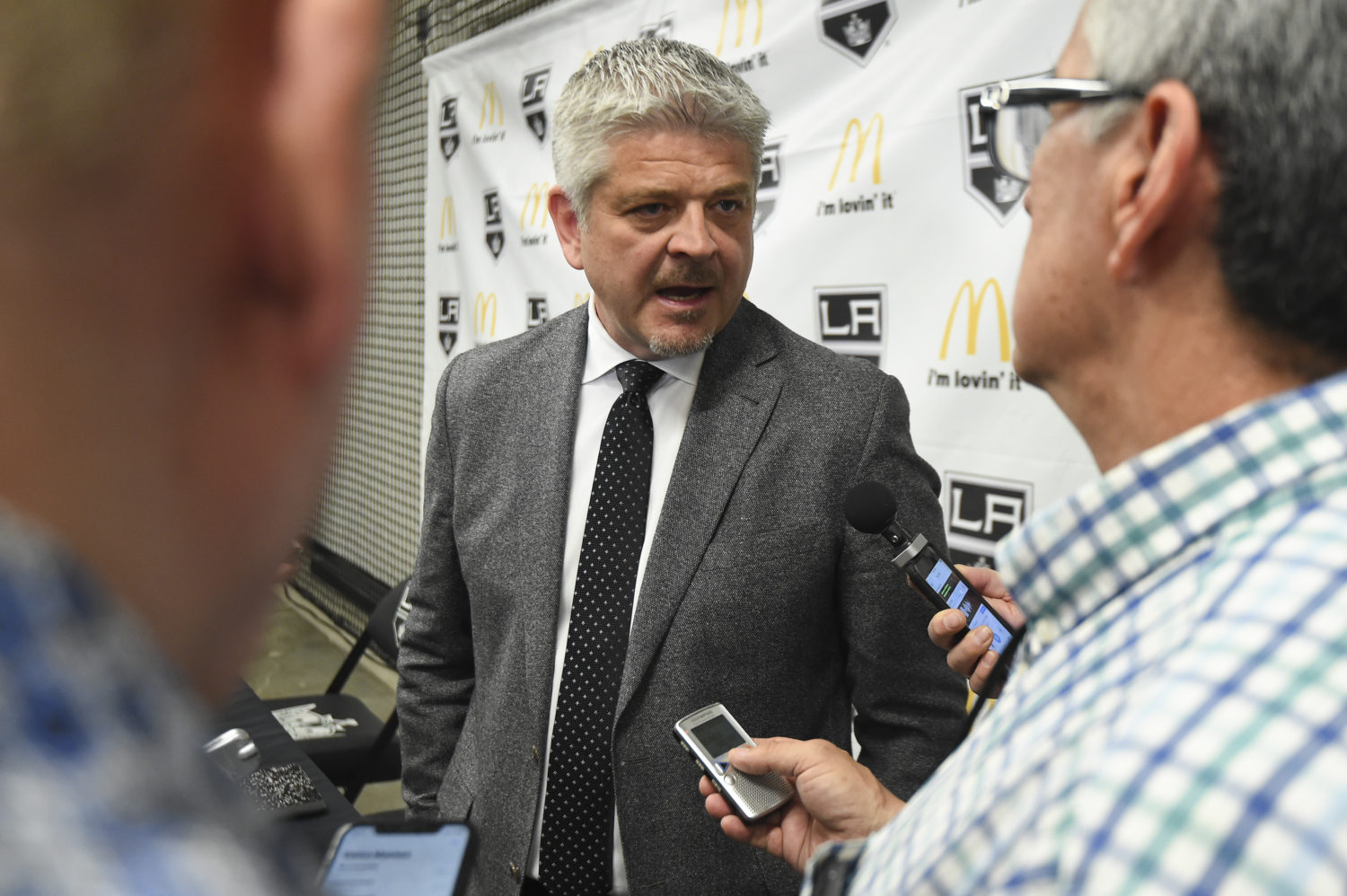 Todd McLellan, on standouts on the second day of training camp:
I felt the group as a whole. I think we’ve got to look at it that way to begin with. I thought the first session, that group was a little more prepared than the last one. The last one, the ice conditions got a bit rougher, fatigue came into play, it dragged on a little bit. But both groups were very attentive. I saw the leadership skills from leaders on both teams, which is really good. Some of the kids were picking up concepts, which were coming at them very quickly. It’s still too early to single out certain individuals from either good play or bad play. We need a little bit more time to do that, and that’ll happen over the next little bit.

McLellan, on whether he runs the same drills and offers the same structure to both groups:
Yes. The way the day is set up, because of the three-hour rule, we’re only allowed so much time on the ice with them, and to fit the scrimmage in, one group gets some direction and structure. They get to put it in play in the game; the other group gets it after the game. Not ideal, but when we leave the rink, we’re all in the same spot heading into day three, tomorrow.

McLellan, on managing Drew Doughty’s colorful personality:
Well, Drew is a unique individual. I believe that some of these special players – and I would put Drew in that category – are unique individuals. They speak from the heart, they’re not afraid to put themselves out there, and when it’s all said and done, when you do that, you have to walk the walk, and I believe that Drew can do that on the ice and he can do that off the ice. That’s a good start for both him and I … as a player/coach relationship evolves. As we go forward, I’m going to let Drew be Drew. But it’s always going to be about the team first. He’s got to consider that with him comments and his beliefs. I don’t think that he puts himself in a bad spot very often, and maybe our game needs some colorful people, so there’s nothing wrong with that. [Reporter: Is there a parallel with Burnsie in some ways? You kind of let him be himself?] Burnsie is a unique individual. I would consider Brent Burns a special player. The things that he does and the characteristics that he brings to the rink and the life and the joy that he brings to the game, I do see that in Drew. It’s not fair to paint them with the same brush – they’re different people. I haven’t figured Drew out, I haven’t been around him enough to tie the two together, so I wouldn’t go there. But they are special players in the league. They’ve got a life of their own sometimes. There are characteristics about them that make them fun to be around and fans are attracted to them. Our game needs that, so it’s great to have those characters. [Reporter: So, the stuff you’d want curbed would be unsportsmanlike conduct or 10-minute misconducts where his temper gets his best of him – that’s team-first issues, correct?] I would say that’s fair, but there are always moments or situations. If you’re down by 6-1 and somebody takes liberties with you as an individual or a teammate, sometimes a penalty is worth it, so I don’t think we can lump ‘em all together. When we need all individuals – I’m not just talking about Drew – when we need key individuals to be on the ice, we want them to be available. I’m not coming in looking to curb anything yet in anybody’s game. I want them to show us what they bring to the rink on a daily basis. I don’t know how our group behaves after a loss or a win yet. We haven’t had any of that, so some of these questions are really good questions, and I know you’re very interested in the answers, but I can’t give them to you yet because I haven’t lived it. It’ll happen, and we’ll talk about it more as we go.

McLellan, on his morning skate philosophy:
I used to believe in them a lot. I’m certainly getting further away from them now. I believe that the old days, back in my day, when players were around, they lived a little differently, maybe, and they were instilled for a different reason. Now, the players- [Reporter: Jim?] Foxy? [Reporter: No comment.] He’s probably the one that behaved, right? [Reporter: I missed a few morning skates.] They found you later, did they? But I think now that the athletes are so well conditioned mentally and physically and they [expend] and use up so much energy on a nightly basis – even the players that play six or seven minutes, they’re hard, heavy minutes – that rest is sometimes important. There are players that are nervous, and on game days, as soon as you walk into the rink, they lose a lot of energy because they’re nervous. When they’re at home and they’re relaxing, they probably don’t eat up as much of their fuel base as they would being in and at the rink. Personal preference, I believe there are some older players in the league that like to have a pre-game skate because it triggers their day, it starts everything. So, we’re a mix between some that need that and some that don’t want it, and we’ll adjust as the year goes on.

McLellan, on his efforts to instill up-tempo play:
I want to be direct. I would like us to be very clear as a coaching staff of what we require of them, what their responsibilities are in certain areas, and then most importantly, why we’re doing it. I continue to try to get that point across – if they understand why they have a better chance at success. I don’t believe in wasting a lot of time at the boards or moving from corner-to-corner, or just loafing around. Let’s go. And what we used to get done – and I’m not insinuating this team – but what hockey used to get done in 60 minutes you can almost get done in 40 minutes now. Keep the pace up, keep the heart rate up, you don’t have to line guys at the end of practice all the time and skate them. Right, Foxy? You didn’t like that either, did you? [Reporter: No, I could skate.] Well, there you go. We just couldn’t find you in the morning. That’s why I think the pace is important in practice – and move from drill-to-drill and be prepared, don’t let your mind wander. So, if we can shorten practices up because we’re going hard, great. [Reporter: Are you pretty willing to jump in if you see things that you want to tweak or explore more in the middle of the drill?] Yep. That has to be done. They can’t skate around confused. If they skate around confused, we’re doing a poor job of relaying our message or giving instruction, then we get mad at them, it makes no sense. They don’t know. So, we’ve got to stop it, we’ve got to catch them doing it right more than wrong, which can be really valuable. But when they do make mistakes, let’s stop it, let’s talk about why it happened, let’s try and fix it and get better in that moment. [Reporter: Do you have any benchmark where ‘by Day One, by Day Five, I’d like to see them have this, or this, or work there?] It’s hard. My experience with teams, San Jose was seven good years. By the time we got into Year Seven, they knew the drills, they knew the routine, language. We could fly through stuff, and you almost had to slow it down for the new players. Right now, this team is just as talented and skilled as those guys were, but they’re trying to absorb a bunch of new things. Let’s get a few concepts in place, let’s go play a few games, let’s fix some things and then add. And we’ll continue to do that.

McLellan, on whether he anticipates the questions he’ll be asked about adjustments to structure:
I think I know what you’re asking – yes, maybe based on the character or the tendencies of what I know about those players. But let’s face it, I know a lot more about Anze and Drew and Brownie, the guys that have been in the league for a long time who’ve played all those games against them. Iafallo and Walker, these types of players I’m trying to visually get a read on them. How do they carry themselves? What are their strengths? What are their weaknesses? With the older players, I think I can anticipate some questions. The younger ones, they don’t have as much courage to ask them, and I haven’t quite figured them out yet, so it’ll take time. [Reporter: Does that happen more when you have the meetings with just the lines and the de-pairs?] Yes, I think that’s human nature. The bigger the group, the less likely the question, and the smaller the group, the better the communication, the more willingness to put yourself out there and ask questions, so we break it down a lot of times in smaller groups.

Find someone who looks at you the way Jim Fox looks at Todd McLellan 😆 pic.twitter.com/zJwjB2lvr3