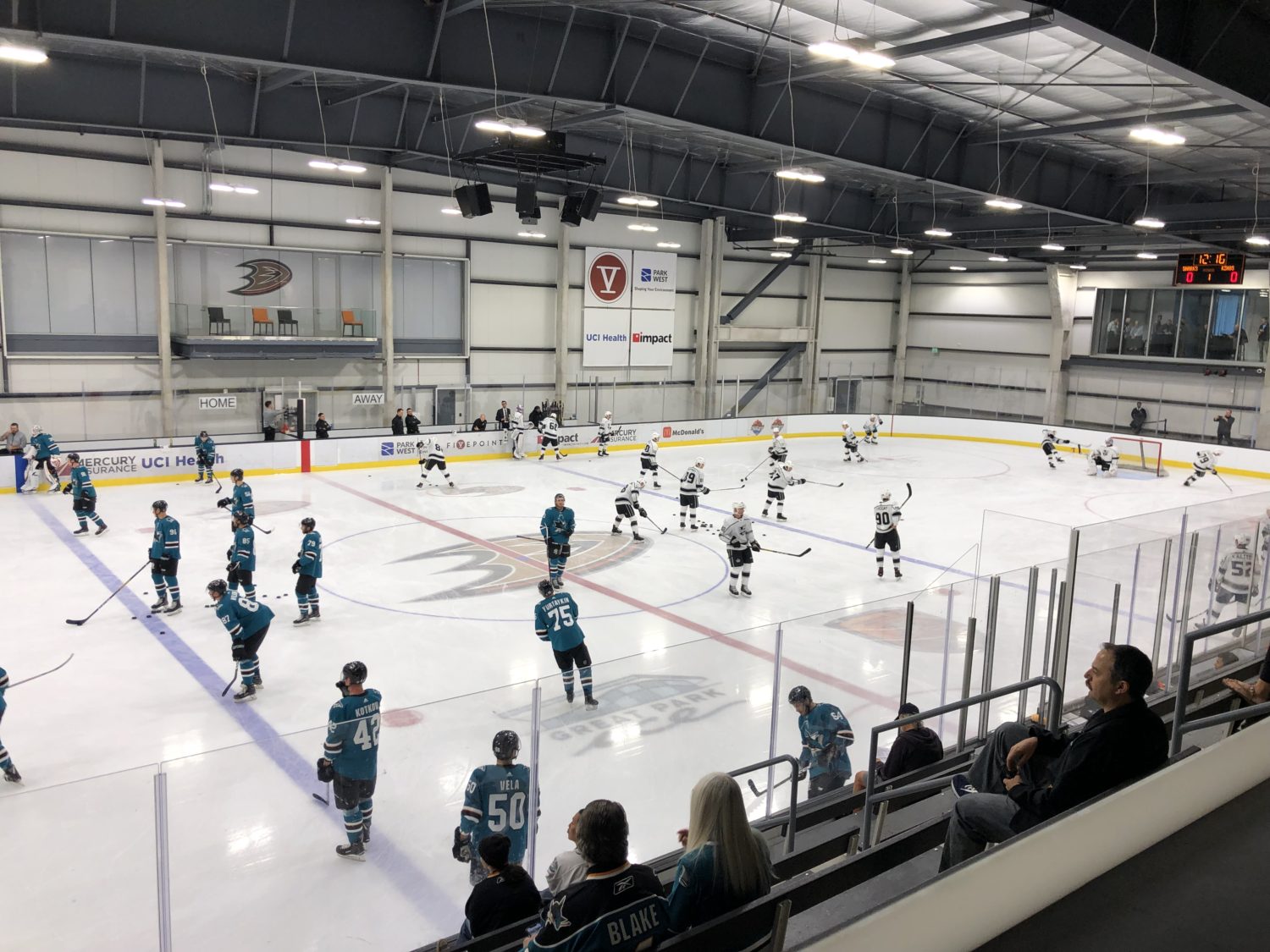 SECOND PERIOD
20:00 – We’re back.
17:31 – LAK GOAL. 1-5. Lizotte from Strand. He’s formed a good friendship with JAD and I believe they’ve been paired up quite a bit off the ice. Was told “they wanted to push each other.” Not literally, I hope!
13:40 – PENALTY SJS. Ivanyuzhenkov for tripping. First LAK PP.
12:52 – POWER PLAY GOAL LAK. Strand hard wrister from the left point through traffic, followed by a little stick spin. He’s a power play guy who scored once on the man advantage in 2018-19 but 14 times with WHL-Seattle the season prior.
10:46 – Pushing, shoving. Actually surprised there hasn’t been as much chippiness in the four-plus periods I saw. The COL game was fairly competitive. PP coming up for LA.
9:45 – PENALTY SJS. Gricius for high-sticking.
7:48 – SHORTHANDED GOAL SJS. 6-2. Good bye, Phenomenon at Five Point? Despite early pressure, Ivanyuzhenkov finds a seam down the left wing 1:56 into the power play and wrists a shot over Parik’s right shoulder.
6:10 – Good reaching Parik save on Gregor’s stuff chance at the far post.
3:20 – Good defensive play by Sodergran, getting an inside lane on Langan to win a 50/50 puck and leave the zone.
3:12 – LAK GOAL. 3-6. Lizotte backhanded feed through the defense, Thomas slam dunk. 6-3. Sodergran pressure on a zone exit to force a turnover, setting the play up.
1:45 – Hard line at goal by McGrew, who bowls over Parik, his potential Spokane teammate. Parik slow to get up but adjusts himself.
0:45 – Middleton snapper catches the crossbar and deflects out.
0:04 – Chmelevski stick checks Thomas, disrupting his backswing and removing him from the puck. Good defensive play.
0:00 – End.

FIRST PERIOD
20:00 – Underway. Warmer in this rink. San Jose (2-0) vs Los Angeles (1-1).
16:50 – Durzi saw a slight seam on a diagonal feed through some neutral zone traffic – it was there – but a San Jose skater got a stick on it to create a turnover.
16:25 – Good Kaliyev pressure to swat a puck out of the zone and create a footrace.
15:55 – GOAL SJS. 1-0. Jake McGrew capitalizes on a turnover. Durzi’s pass was broken up on a forecheck, leading to McGrew’s opportunity down low. McGrew (Orange) and Sasha Chmelevski (Huntington Beach) are a pair of Orange County natives.

Head down as I was bloggin', but I'm told Jake McGrew just scored an attractive goal on potential @spokanechiefs teammate Lukáš Pařík. McGrew, an Orange native, is an overager who could also play for AHL-San Jose. 1-0 SJS.

13:32 – GOAL SJS. 2-0. Gregor from the slot. Hard wrister from a dangerous area after LAK had challenges clearing the puck.
10:20 – Dangerous pass to the slot, but Gregor fanned on a one-timer with some ample net. LAK back on their heels.
9:40 – Missed call as Hamaliuk trips Yantsis behind the SJS net.
8:49 – Sustained LAK work and pressure, and some loose pucks around the crease, but no prime rebounds or high-grade looks.
8:10 – Nice little touch-give-and-go between Kupari and Fagemo. Wasn’t perfectly executed, and didn’t result into a long foray into the zone, but a good idea around some traffic past the San Jose blue line.
7:16 – LAK picking up the pace. Spence walks into the high slot and issues a backhand that Emond swallows up.
7:11 – LAK wins another draw – believe it was Thomas for the second straight time, even with JAD on the ice – Thomas took RW draws; JAD took LW dOZ draws – and Spence snaps it on net. Emond save.
6:35 – More LAK pressure, but Thomas’ stick is lifted as he’s dispossessed to Emond’s right and San Jose leaves the zone.
6:15 – Parik pad save, cover on Chmelevski.
5:55 – GOAL SJS. 3-0. Hamaliuk from the perimeter. Head down while blogging.
3:00 – PENALTY LAK. Austin Strand for interference. Stothers wasn’t particularly happy about Strand’s four minors in the last game, though the long defender played a hard, chippy game while on the ice and got pucks on net.
2:25 – Good Parik glove save on a sharp Kotkov wrister.
2:13 – POWER PLAY GOAL SJS. 4-0. I thought it was Hamaliuk on a deflection undisturbed in front of Parik, but credit goes to Yurtakin, unassisted. ¯\_(ツ)_/¯
0:42 – GOAL SJS. 5-0. Kotkov bangs in his own rebound after a good look from the right circle.
0:03 – Nice play by Gregoire to end what could of been a 3-on-1 or breakaway by chopping down a bouncing puck intended for either Kupari or Fagemo. Read the play and adjusted well.
0:00 – ~fin~ 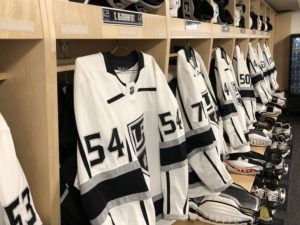 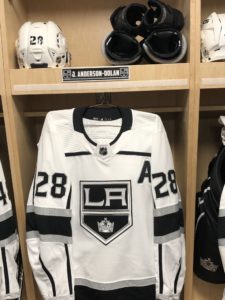 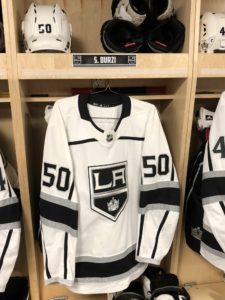 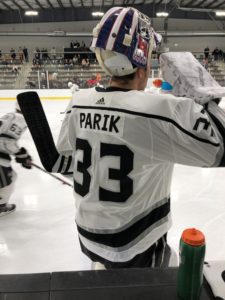 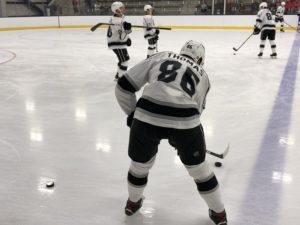 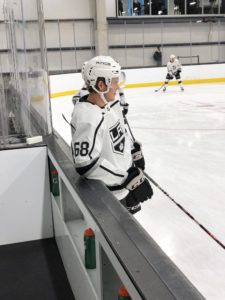 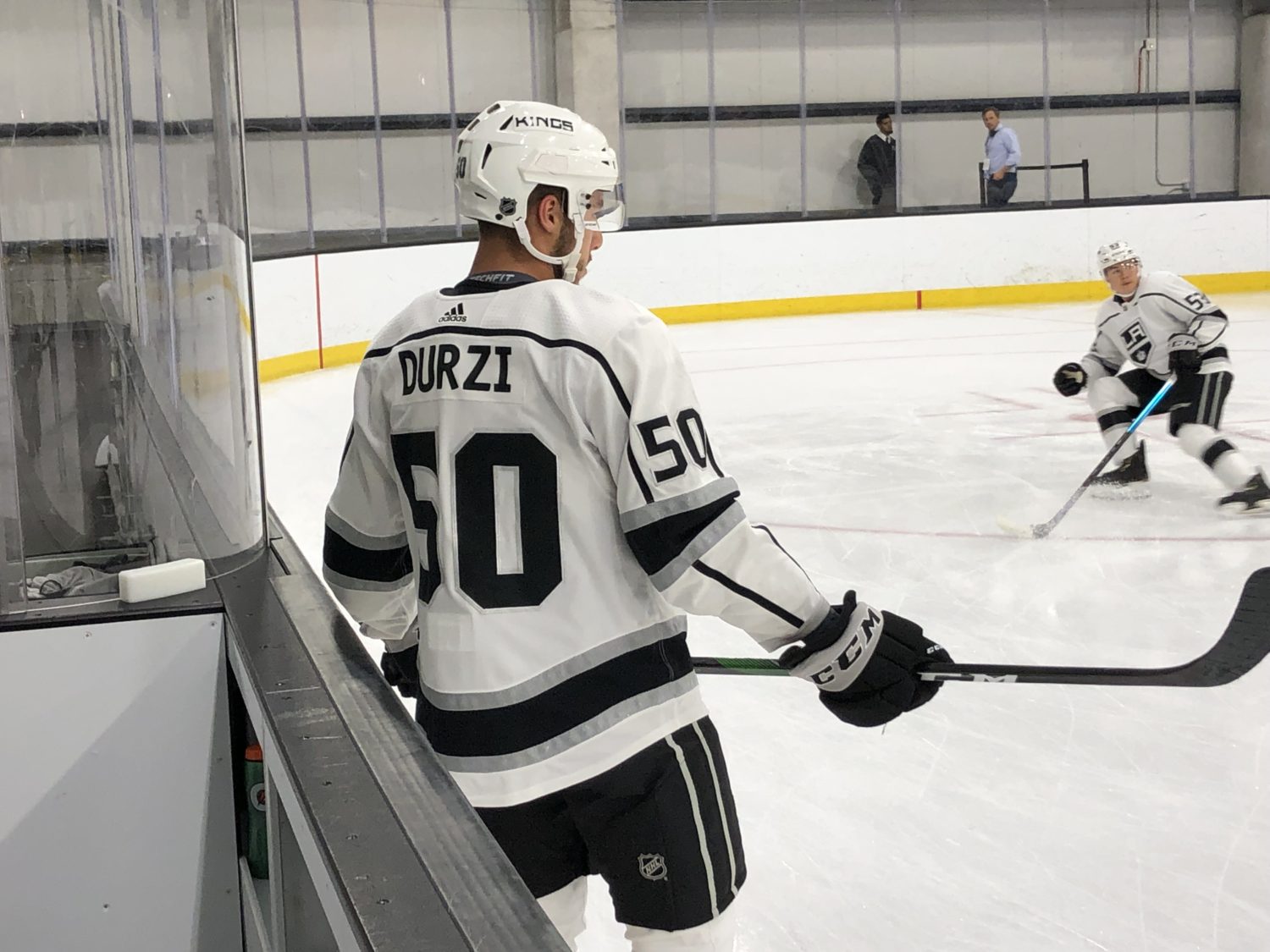