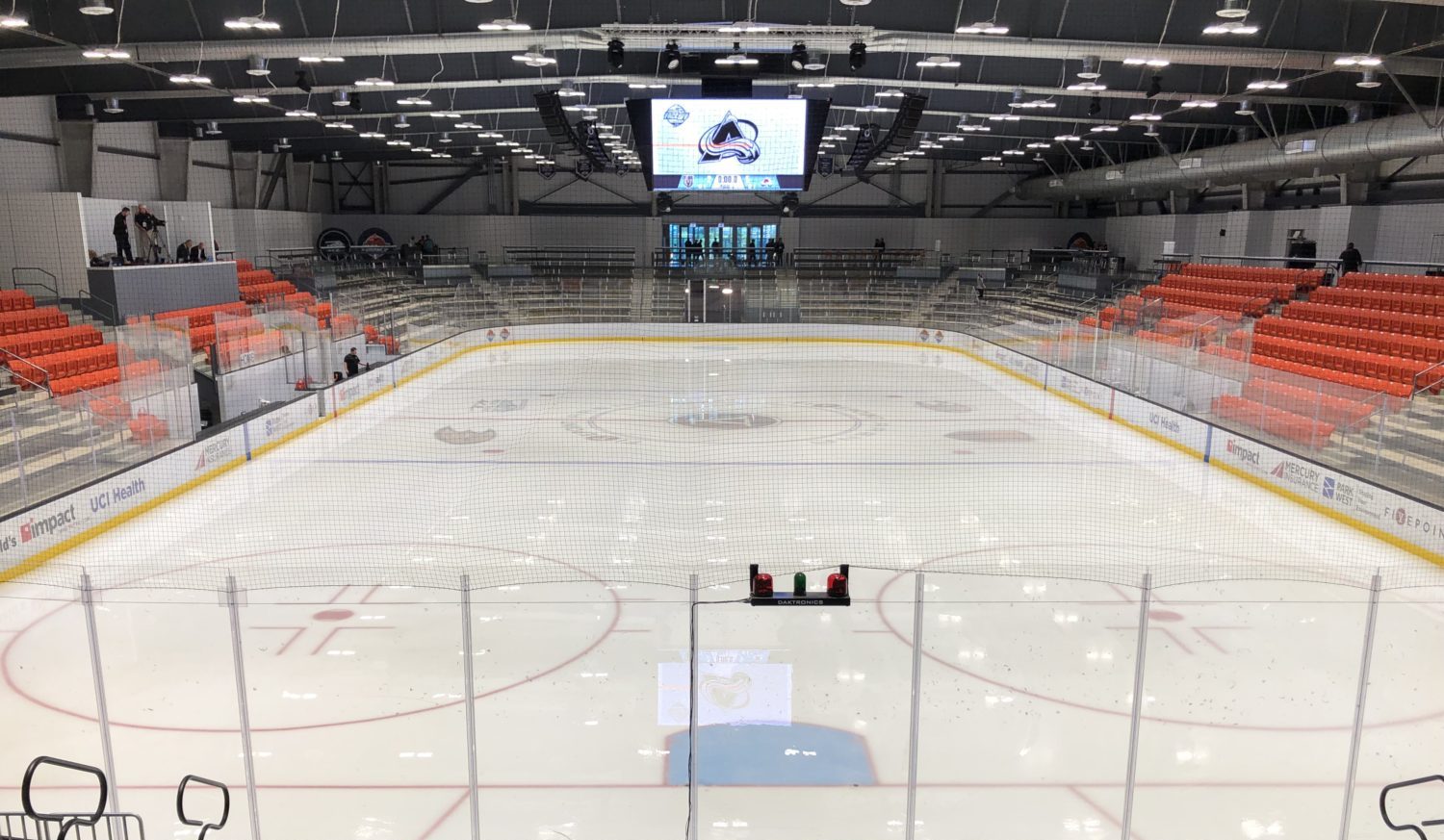 20:00 – Ducks lead 4-1 as we begin the third and final period of regulation.
19:00 – Terrific early chance for Mikey Anderson, who get around the defense and dekes to the backhand, but his shot goes barely wide. Aggressive start for the Kings.
18:51 – Kings to the penalty kill for the second time tonight. Kaliyev sits for high-sticking early in the third.
15:36 – LA gets the kill and creates a few chances after, Fagemo with a few shot attempts. Fagemo is dumped after the most recent and Kupari, Anderson-Dolan take exception, leading to one of the first real skirmishes of the evening in the corner.
13:52 – Comtois and Durzi drop the gloves in front of the Anaheim bench. You knew there would be a fight, it is Kings/Ducks after all, but I did not have that pairing in my pre-game bets.
9:06 – Like the effort the Kings have put in so far in the third. Lot of compete in so far in this period, not rolling over against a bigger and more experienced opponent.
7:49 – Kings get another opportunity on the power play, as Drew heads back to the box for the second time tonight.
6:53 – Evened up…..Durzi heads to the box after what I thought was the best Kings PP of the night to date. Couple nice chances for Fagemo, who has created his fair share throughout the evening.
1:56 – Kings almosttttt get one but Rymsha tips Eyssimont’s shot off the post. Kings have had chances in the third and looked a lot tighter defensively. Though still trail 4-1 as we approach the conclusion.
0:00 – FINAL: Anaheim 4, Los Angeles 1

20:00 – Back at it for the second, Kings trail Anaheim 2-1.
18:27 – Ducks Goal – Keefer Sherwood gets in behind the Kings defense and beats Villalta through the five hole on a breakaway. 3-1 Anaheim, early second period.
16:57 – Kings head to their second man advantage of the evening. Drew to the box for Anaheim just over three minutes into the second, slashing is the call.
15:23 – Best look on the Kings man advantage is a shorthanded breakaway by Sherwood, but he’s denied his second goal by the left post. Back to even strength.
12:50 – Nice look for the Kings as Dudas feeds Bergh, but his shot from a tight angle is kept out by Dostal. Good chance creation from that unit off the rush.
11:38 – Kings back to the power play, now their third of the evening. Sideroff sits for tripping, will see if the Kings can produce a bit more on this attempt.
9:38 – Better on the PP for LA, though still not particularly threatening. Kings now 0-3 on the power play and have yet to play on the penalty kill.
4:24 – Kings now take their first penalty of the game, Eyssimont to the box for tripping, an inadvertent knee-on-knee hit, though looks like everyone is okay.
3:12 – Ducks Goal – PPG for Sam Steel. Goes just about top shelf from the left-hand circle. Ducks PP unit consists of five players that played in the NHL last season, going to pot a few. 4-1 Anaheim late in the second.
0:00 – 4-1 Anaheim through 2 periods. After a pretty sizzling start and a 1-0 lead for the Kings, it’s been just about all Ducks since. Shots are now 28-18 after 40 minutes.

20:00 – We are underway in Irvine!
16:50 – Strong start from the Kings, who have been in behind the Anaheim defense on pretty much every shift to begin the game. Best chance thus far probably a Lizotte wrister off the rush, which was kicked aside by Dostal.
15:22 – Villalta makes a double save on Jack Kopacka, who got behind the LA defense down the left wing. First real chance for the Ducks, but a good one for sure.
14:00 – Kings PP: Morrison slips in 1-on-1, dances around Hayes before he’s hooked by Max Jones. Kings get the first man advantage of the night.
10:27 – Teams trade 2-on-1’s – First it’s Terry and Sherwood, then it’s Kupari and Anderson-Dolan the other way. The big boys are going at it and it’s fun to watch.
9:05 – Kings Goal – Eyssimont’s shot from the left wing freezes the Ducks netminder Dostal and Kaliyev drives the net to knock home the rebound. Good reward for a good start to this game from the Kings. 1-0 LAK midway through the first.
6:08 – Ducks Goal – Max Jones drives the net and knocks home a rebound from Groulx. Heavy traffic in front of Villalta on that one, rebound just got away from him.
4:44 – Ducks Goal – Max Comtois with a redirection on a shot from the point, Ducks bounce back wit ha pair of goals to take a 2-1 lead.
1:21 – Big blocker save form Matt Villalta, who has had more work as the period has progressed – Denied Terry from a dangerous area in the circle.
0:00 – Ducks 2, Kings 1 at the first intermission. LAK dominated the first half of the period, momentum started to swing in the other direction after that. Overall, some fun action in Irvine.

Pre-Game Notes
– Matthew Villalta is expected to play between the pipes tonight, with Lukas Parik backing up. Villalta was the Game 1 starter at last season’s Rookie Faceoff as well as Los Angeles played against Anaheim.
– Defenseman Austin Strand will wear the “C” tonight for the Kings, with forwards Mikey Eyssimont and Brad Morrison wearing the “A”. Head Coach Mike Stothers rewarding his experienced players – All three played for Stothers last season with Ontario in the AHL. 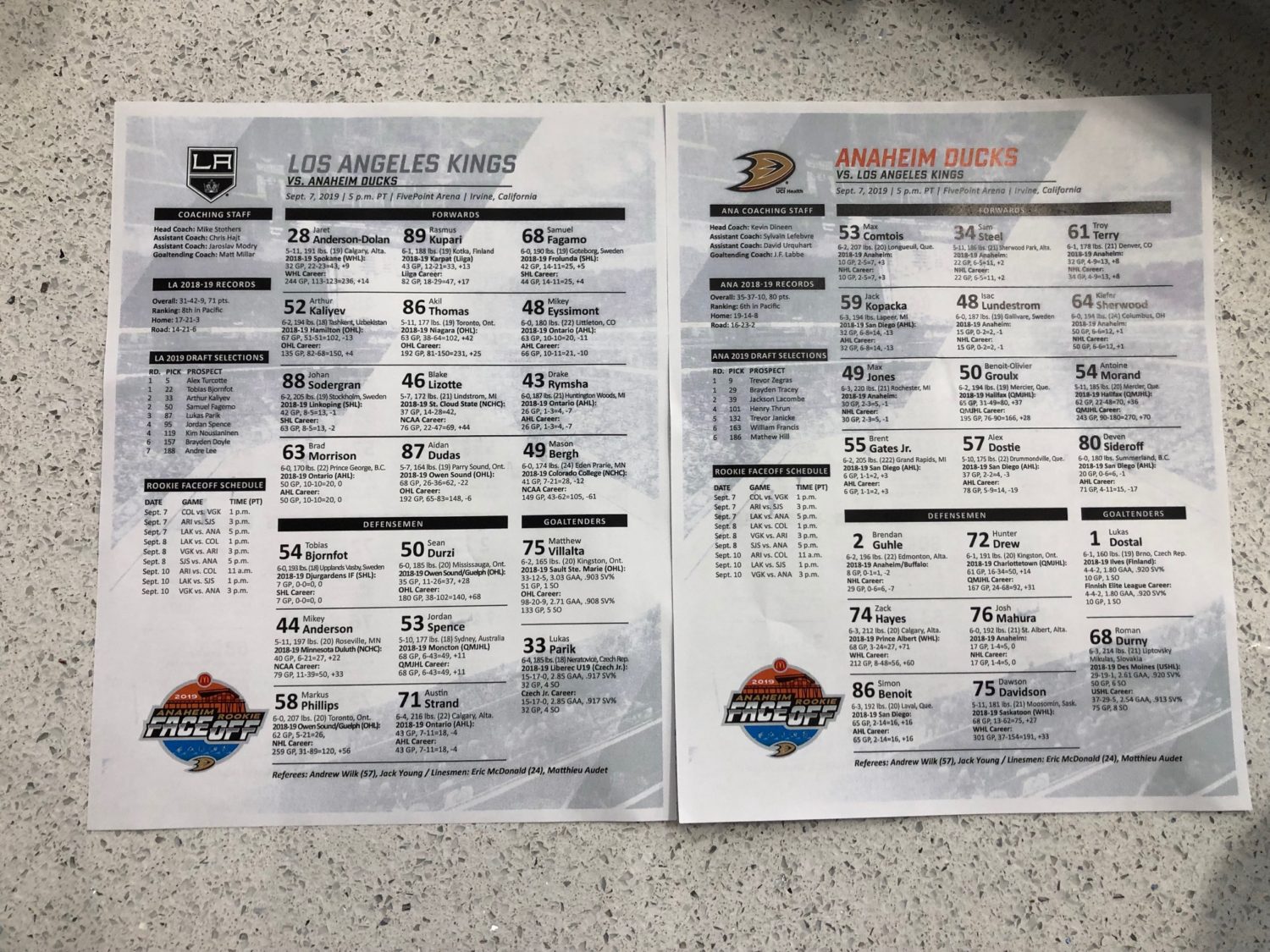