With development camp wrapping up, LA Kings Senior Advisor to the General Manager/Development Mike O’Connell met with the media to characterize the week of development that concluded with close-quarters, width-of-the-ice, three-on-three scrimmaging.

Interestingly, there was a different approach to development camp this season. In earlier years, there was less of an emphasis on scrimmaging and a heightened focus on instilling certain fundamentals. Previously, there weren’t even pucks on the ice for the very first on-ice tutorials, which often emphasized skating and body positioning technique; on Tuesday, the Black Team’s first on-ice session was a scrimmage. Prior to last year, there hadn’t even been firm “teams,” but rather groups divided by position. Now, the players are quickly getting at it with some fundamentals work tied in with drills and scrimmages that are regularly stopped when there’s an opportunity to teach.

“I think we still teach the fundamentals – the fundamentals are important – but everyone skates different. I think we’ve come to the realization to get them to do it their way is the best way,” O’Connell said. “We stress the passes on the tape, we stress don’t miss the net – all those things are extremely important. But sometimes if you go into baseball and you look at the batters, I’m sure the principals are the same, but they all do it differently. Hold the bat up, hold the bat down, so we don’t want to restrict he players to think that they have to do it a certain way that we necessarily think that the way it’s done. We’ve got to give the freedom – everyone’s body is different. Everyone’s balance, everyone’s size, and everyone does it a little bit different. We’re encouraging that, but also with that in mind, hey, you have to work hard, you have to make the pass, you can’t miss the net, you have to make the plays that are available. We want to encourage them to do that. “

Mike O’Connell, on Rasmus Kupari’s growth over the past year:
Well, a lot has happened to him since the last time we saw him. He became a champion at world juniors and he had a successful first year pro playing in Finland in the elite league, so he’s matured. He’s gotten bigger and stronger and faster, and he’s played with men for a year. So, that’s what you get. It’s natural. It happens naturally. The speed is evident. He’s got very good hands, and he was a first round pick. This is what you get when you get first round picks.

O’Connell, on whether Kupari has a higher degree of skill than typical mid-first round picks:
If we look at he’s one of the top 30 18-year-olds in the world, that’s what you get. Their skill level is outstanding in the world of hockey right now. Even when you go down in the fifth and sixth and seventh round, you find some excellent skill. In fact, there are players that don’t even get drafted, their skill level is [high]. We have some work to do with him – but it looks to me like he’s on the right path. [Reporter: Is he readier than maybe anyone kind of expected him to be at this point? I know it’s hard to really put a timetable on it.] We’ll see in training camp. Actually, sometimes you come to training camp, you have players you think that are going to really jump out and other players do. Because they’re playing with men, they see it differently, it’s a whole different game.

O’Connell, on Arthur Kaliyev’s offensive gifts and endeavors to boost his two-way responsibility:
I’m not worried about that right now. Keep his skill going. That’ll come. That’s teachable. What he has, the offense that he has, that’s something that he has in him, and we can work on that, but the defensive part of the game, he’s going back to junior and he’ll get that. They have a good coach, they have a good system [in Hamilton]. We’re excited, we’re so happy to have him on our team. He looks like he’s going to be a proven scorer no matter what level he plays at.

O’Connell, on whether Alex Turcotte has been “everything as advertised”:
Yes. For me, I never saw him play. When I saw him play, he’s got a star quality and we need one of him. He looks like he sees the ice, he’s competitive, good hands, goes through traffic, all that stuff that you hope that your player does, and he does it. He’s a pretty good package. He’s going to be fine.

O’Connell, on what was said to the benches during an early pause in Thursday night’s scrimmage:
Basically, the message was ‘don’t pass it to someone who was covered.’ Passing it to people who are covered – don’t do that. If you don’t have [a good opportunity] to pass, don’t pass it. Hold onto it, go back, use the whole ice. And, also, work to get open. If you looked at our camp, we don’t allow the players to dump it in or dump it out. There were no dump-ins, no dump-outs. But the puck carrier has to have options, and it’s not only his responsibility to make the play, but the other four guys or three guys or whatever, they have to get open. That’s basically what I was telling them. ‘Get open.’ Getting open is an art. It’s something you probably don’t work on enough, so we really want to focus on ‘you really have to get open for your teammate.’

O’Connell, on whether he’s been able to get a sense of Tobias Bjornfot’s “character”:
Hard to do that. Language skills, he’s coming into a new situation. I think you see those more when a guy’s more familiar. But he’s an excellent prospect who moves beautifully laterally on the offensive blue line. Good shot, head’s up, positioning’s good. If he has leadership qualities where he’s been at, the players that I know who’ve been through that program and have seen the Swedish Leagues and they wore C’s, they’re pretty good people. If you look throughout the league with the Swedish players coming over and took leadership roles, and if he’s going to be one of those, he’s got some good pedigree.

O’Connell, on the Eisbaren Berlin ties resulting in players like Kim Nousiainen and invite Nino Kinder:
It’s something that ownership wanted us to develop, and it’s still in the developing stages. We spent a lot of time over there during the season and hopefully you’re just seeing the start of this partnership. Where it goes, who knows. But we’re working at it and we want to continue with it – they can help us, we can help them – and create a real tight synergy. I think it’ll evolve even more so over the next three-to-five years.

O’Connell, on whether he’s come to expect the level of play Jaret Anderson-Dolan has shown:
He’s been here a number of years, he works out here with the team now. It comes naturally to him. Another quality, character kid. You put enough of those kids around, the quality and the character on your team’s going to increase rapidly, and that’s what’s happening. It’s going to rub off on other guys, the next guys coming up, and that’s what you want to try to create.

O’Connell, on what he’s been listening to on Spotify over the past week:
I don’t know, I see that Led Zeppelin’s got a whole new station out there. 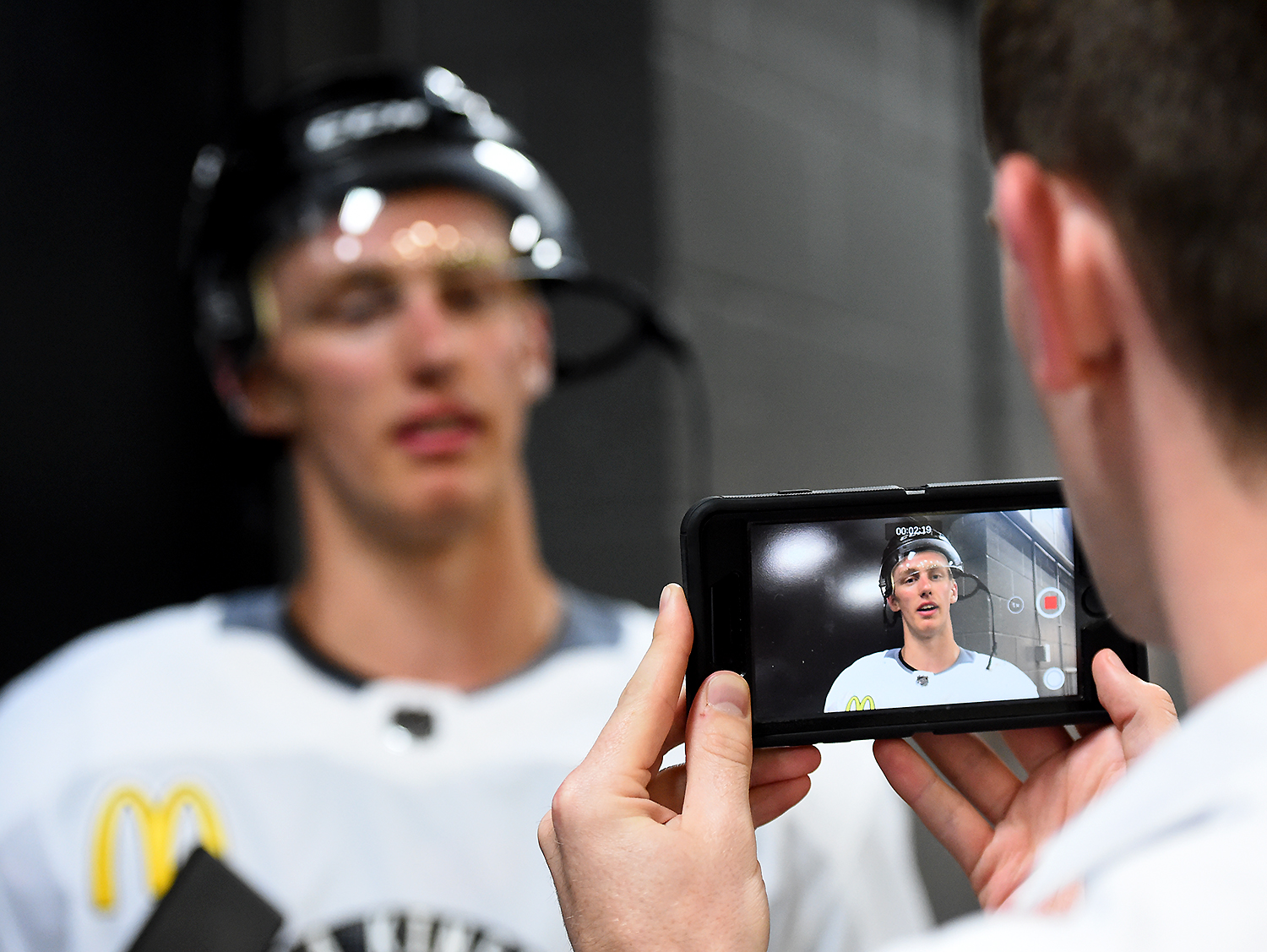