For the second time in five days, we have Johan Sodergran news! The LA Kings announced this morning that they have signed the 19-year-old forward to a three-year, entry-level contract.

Sodergran, selected by Los Angeles in the sixth round of the 2018 NHL Entry Draft, is the third member of the Kings’ 2018 draft class to sign an entry-level contract with the team, joining first-round selection Rasmus Kupari and second-round selection Akil Thomas. The Kings have also inked defenseman Sean Durzi, a second-round selection who was taken the pick after Thomas, after he was acquired via trade from Toronto.

As reported last week, Sodergran is expected to be in El Segundo later this month for Kings Development Camp, attending the event for the second consecutive season. Sodergran drew some attention at 2018 Development Camp as his combination of size, skating and skill was on display for those in attendance. As was also previously reported, Sodergran is expected to return to Sweden for the 2019-20 season to fulfill the second-year of his contract with Linköping – Look for Sodergran’s arrival to Southern California to potentially come on a full-time basis during the 2020-21 season as a 20-year-old. A season ago, the 6-3 forward ranked inside the Top-10 in SHL in scoring among under-20 players, finishing tied for fourth with eight goals and alone in ninth with 13 points. Sodergran also featured for Sweden at the 2019 World Juniors, going scoreless from four tournament games with an appearance in the quarterfinals, though he did tally shorthanded in a pre-tournament win over Russia (below).

From the team’s official release:

Selected by the Kings in the sixth round (165th overall) during the 2018 NHL Draft, Sodergran has appeared in 63 career regular-season SHL games, where he recorded 13 points (8-5=13) four penalty minutes and has gone scoreless in four postseason games. He has also played in 72 regular-season games at the SuperElit level, where he registered 46 points (20-26=46), a plus-11 rating and 18 penalty minutes along with seven points (5-2=7) and a plus-6 rating in 11 postseason games.

Internationally, Sodergran recently appeared for Team Sweden in the 2019 World Junior Championship, going scoreless in four games before the Swedes were upset in the quarterfinal round by Team Switzerland. 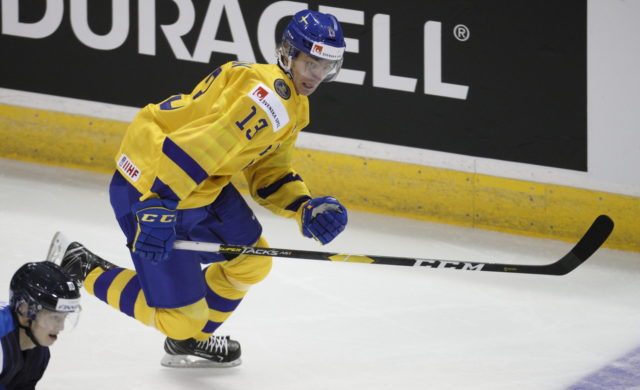 VICTORIA , BC – DECEMBER 26: Johan Sodergran #13 of Sweden versus Finland at the IIHF World Junior Championships at the Save-on-Foods Memorial Centre on December 26, 2018 in Victoria, British Columbia, Canada. (Photo by Kevin Light/Getty Images)