DEVELOPERS DEVELOPERS DEVELOPERS DEVELOPERS | More on Development Camp. Rasmus Kupari (1st / 2018) and Johan Södergran (6th / 2018) are both expected to attend. This is more of a confirmation than any breaking news, but both players were unable to participate in rookie and training camp in September because their Liiga and SHL seasons were already underway, and that will hold true again for Södergran, who will fulfill the second year of his contract to Linköping in 2019-20. He got off to a blazing hot start in the SHL, totaling four goals and six points in his first seven games and collecting seven total goals through his first 21. He then hit some mid-season doldrums after his 19th birthday, accounting for only one goal over his remaining 21 games. But he’s a good skater who’s able to fight through contact, and at 6-foot-3 and with what appears to be some unearthed scoring ability, he’s going to have an opportunity to play beyond the Swedish Hockey League. He hasn’t yet signed with Los Angeles, so the upcoming season will be a good harbinger of where he’ll play upon the conclusion of his contract. If you’re fluent in Swedish or simply want to gaze longingly at his flowing locks, the Linköping website has a treasure trove of Södergran interviews.

Kupari will attend both development camp and rookie/training camp, and while he’s a player likely ticketed for Ontario, the Kings would love to see him make a bid for a roster spot this fall. He had 12 goals and 33 points in 43 games with Kärpät – been using a ton of umlauts recently – but hit a bit of a wall in the playoffs in which one reporter on the scene shared with LAKI that he “looked a little too much like a 19-year-old in the finals.” Which he was! It was a busy season for Kupari who, per EliteProspects, appeared in 76 regular season, playoff and tournament games between Kärpät and the Finnish national junior team. He turned 19 three months ago. While players like Aidan Dudas, Gabe Vilardi and Jaret Anderson-Dolan have had recent spells as teenagers in the AHL, the only player to play an essentially full season with Ontario as a teenager was Adrian Kempe, who did so as during his 2016-17 19-year-old season.

An email asking whether Bulat Shafigullin (3rd / 2018) would attend camp was not immediately returned.

THAT MAKES SENSE | Lisa Dillman of The Athletic ($) spoke with LA Kings President Luc Robitaille. This is important:

So where does free agency, in the summer of 2019, fit into the plan?
I couldn’t even tell you right now. I’d be surprised if we would shop in the big market. It’s not the time yet and we don’t have the cap space. We’ve got a lot of work to do on our young guys and getting it right. That being said, we’re going to look. You’re always listening and you got to see what’s happening but …

I still get the regular questions about Artemi Panarin. As was shared a month ago, “Don’t expect Artemi Panarin to be a King.” Bookmark that. So much of what we’ve heard internally and as shared by Robitaille in his conversation with Dillman, is that the Kings are not contenders right now and envision themselves returning to contention in the next two to three years. They’ve preached internal patience, and while they’ve attached some fancy words to what’s essentially a rebuild, nothing about their current course indicates they’re going to scrap the vision and plan of attack presented to fans, reporters, employees and their owner.

FEEL A DRAFT | More prospect and draft coverage will come Friday, courtesy of Heather Engel. (I’m actually off on scheduled vacation time Friday and Monday, so don’t come knockin’ over the four-day weekend – that’s Willie’s time!) Heather spoke with Mark Yannetti and will share an interesting piece over at LAKings.com about finalizing the draft list and wrapping up scouting endeavors, and how the team used the Combine to construct their evaluations. It’s a very interesting read. The Kings are down to a very small number of players they’re considering with that fifth pick. More on this subject to come Friday.

PROSPECT LISTS | Speaking of which, Corey Pronman’s Mock Draft 1.0 ($) and Craig Button’s latest rankings were released today. To build off what I shared in the preview for the LAKings.com piece, Pronman wrote of the Kings’ fifth pick, “the names I’ve heard with the Kings are the two Western centers Dach and Dylan Cozens.” As of today, it’s appearing as though Alex Turcotte and Bowen Byram are probably going to go in some order at three and four, though Pronman also referenced Colorado’s interest in both Dach and Zegras. Neither Chicago nor Colorado are jonesing for a defenseman, as you’re aware, but the default “best player available” rule would suggest that Byram, the best defenseman in the draft, would go in one of those spots. More to come on this front Friday over at the main site.

TONY BABCOCK | “I think a character like that works great when the team is doing well,” Thomas Middleditch said on Conan two nights ago, followed by an uncomfortable and intended pause. The comedian and Silicon Valley star spoke with Conan O’Brien (video: HERE) about what did and didn’t go right during his appearance on Hockey Night in LA in January. It’s a fun conversation that reveals what Middleditch thought about Babcock’s regional sports network debut, and yeah, WE ALL KNOW WHAT YOU THOUGHT, INSIDERS. Anyway, there will be more Tony Babcock at the NHL Awards later this month, as Middleditch shared. 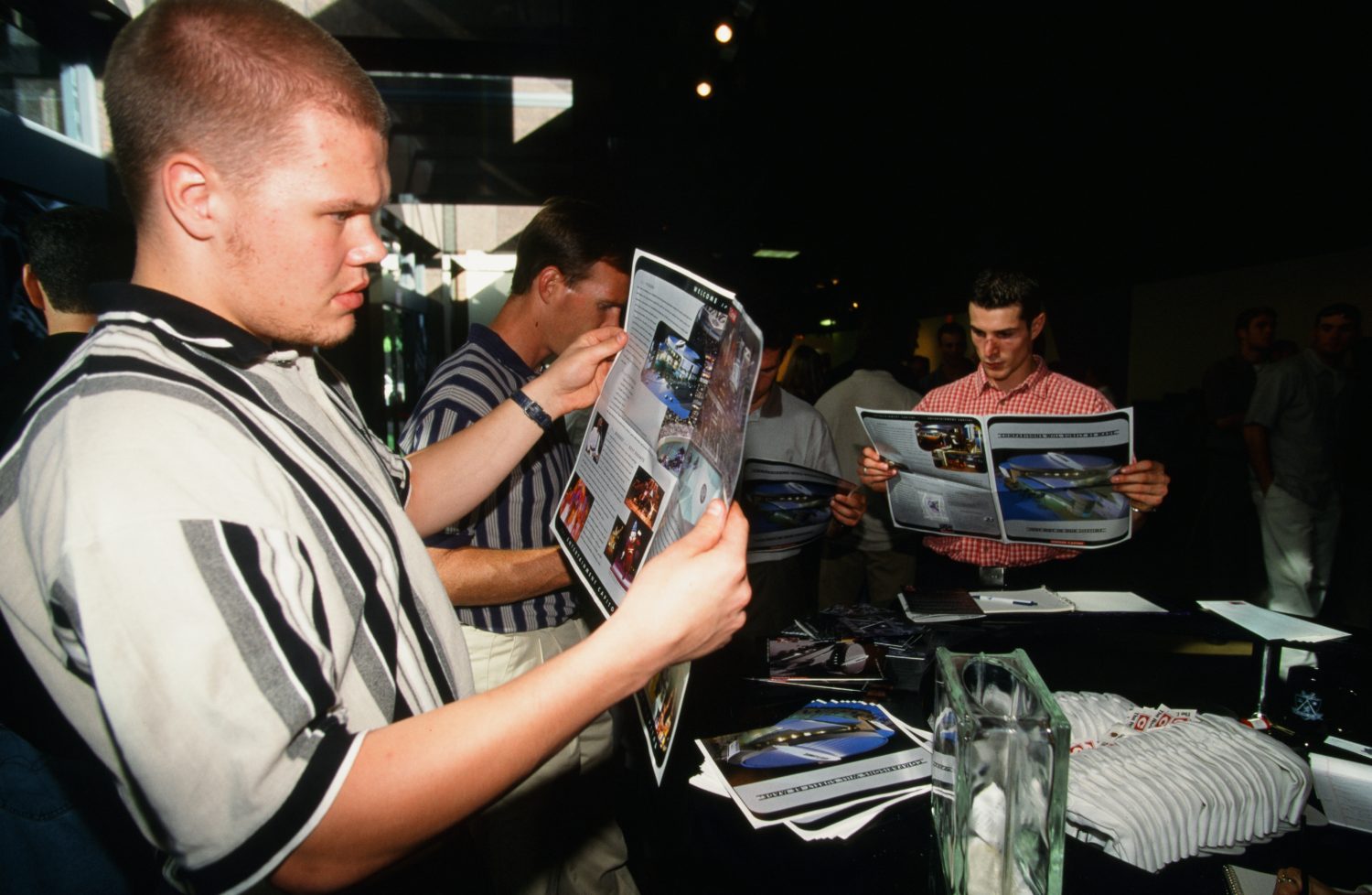