Difficult personnel, salary decisions ahead; Carter: “I want to be an L.A. King” 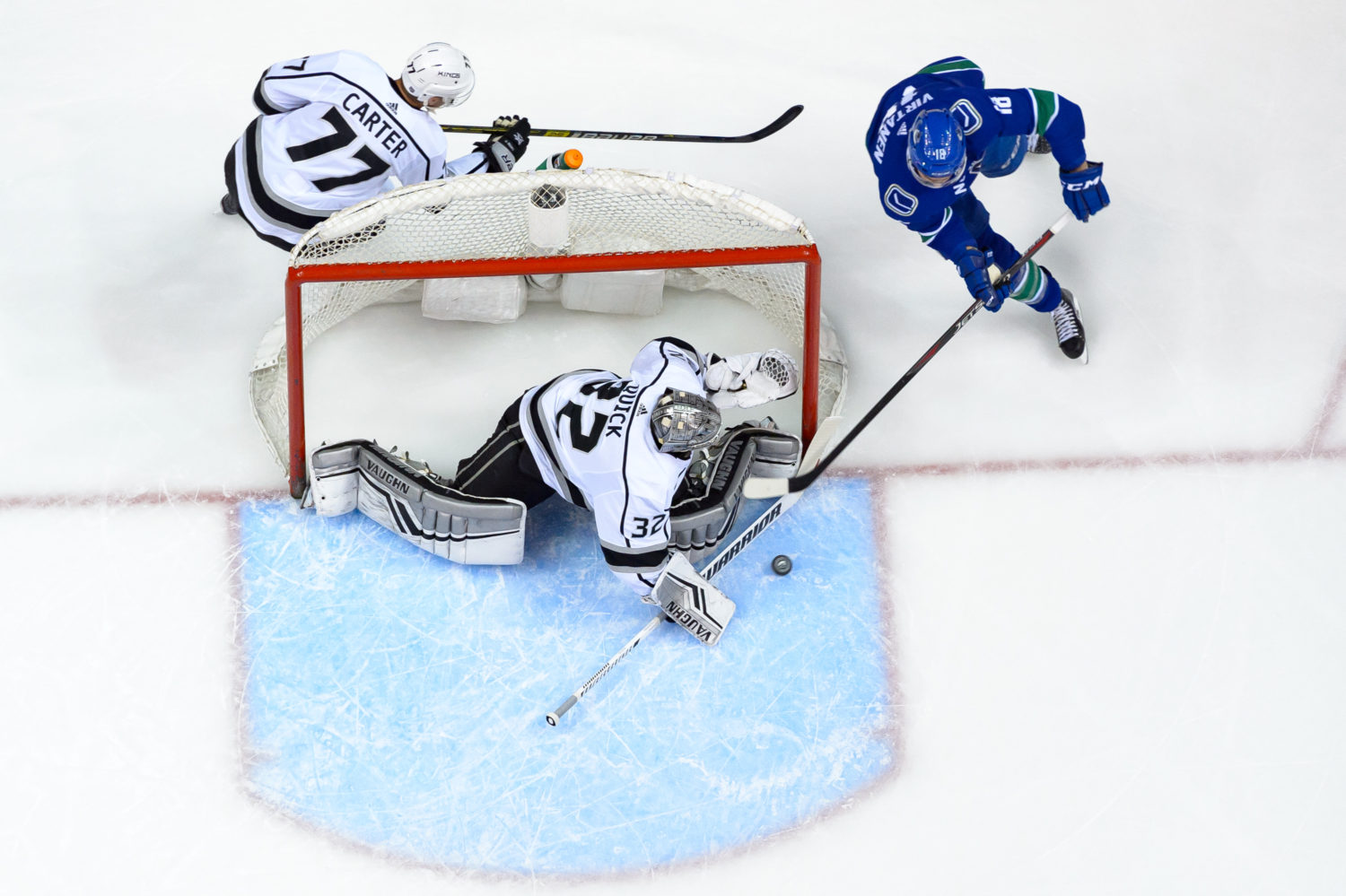 Jeff Carter on Monday was asked about the coach the team needs at this particular juncture in time. “I mean, I think we need someone’s that going to come in with a strong personality unafraid to hold people accountable and who lays out his plan and makes sure that everybody’s on board,” he said.

One common word used those who spoke about coaches at the year-end news conference was “accountable,” and while a coach’s personality is never boiled down as simply as being “tough” or “softer” – there are so many gradients and variables and unique means of communication with different individuals – it sounded as though the team’s veterans advocated for someone with somewhat of a harder hand. “I think we need someone that’s going to kick our ass a little bit,” Doughty memorably said.

The teed-up response to that is “yeah, well you had Darryl Sutter.” Certainly Anze Kopitar understood that when he said that “there’s definitely some looking in the mirror” ahead for a group of players that’s had three coaches in two years. But Sutter, for as well as he graded in structure, detail, extreme accountability and gamesmanship, also had a shelf life with this group, and his presence and approach is a catalyst when the players are winning and grating when they are not.

But there will be a mix of older veterans and younger players on next year’s team, and it’s too soon to see which of the veterans with weighty contracts the team will be able to move. Divorcing themselves from less productive and transferable contracts with expensive term is a priority, though the market around the trade deadline wasn’t an environment in which the team would have been dealing from a position of advantage, and it remains to be seen what the market will be around the draft and through the off-season.

Two players whose names were among those to surface were Jeff Carter and Jonathan Quick. Neither has trade protection. “I’ve been here for over a decade, so it’s obviously home for family,” Quick said. He speaks for a number of teammates, and certainly their close quarters in South Bay pockets was a perfect incubation for team camaraderie and family community.

Neither played themselves into any team leverage whatsoever this season, and it remains to be seen what type of market may develop around the NHL Draft and, perhaps, later this summer. Carter, 34, scored 13 goals in 76 games, the same number he’d reached in 27 games the year before. Quick, 33, lost more games in regulation than he won for the first time since his three-game 2007-08 debut, finished last among qualified goalies in save percentage and second to last in goals-against average.

A team-wide funk and poor special teams accentuated their shortcomings, and Quick wasn’t able to bail out a defense under construction featuring younger players who had been projected to play in Ontario. He carries a $5.8-million cap hit for the next four years but will still be paid $7M in 2019-20 – the same he was paid in the first year of his 10-year contract – before the actual payment drops to $3.5M, $3M and $2.5M (figures via CapFriendly). It is not clear, again, if or how the goaltending market has evolved from the February 25 trade deadline, but that $7M of actual money due Quick in 2019-20 is an expensive investment to teams looking to add a starting goaltender.

Carter has three more seasons on his contract in which he’s due an actual sum of $7M but with a larger $5.27M cap hit.

Exchanges were made, but the team didn’t venture deep into any Carter negotiations that made sense prior to the deadline. There wasn’t much action at all on the versatile center, though Carter does not have trade protection and shot down insinuations that he “could walk away” in the event an outcome was not preferred and that the team would communicate with him “and ensure that it would be a situation where Carter would be comfortable.” He wants to remain a King.

“I’ve got three years left on my contract. I want to be an L.A. King. I want to help change things around here, but I don’t have trade protection, so whatever happens, happens. And I never talked about retiring, either. That never came out of my mouth.”

He also shot down a suggestion Monday that he’d change up his off-season training regimen; especially early season, he still appeared hampered by the ankle laceration necessitating surgery that cost him 55 games the previous season. Barring a trade, he’d return to the Kings as a player who might see some use at right wing once again.

“With Jeff, we have that availability,” Blake said. “To move a center to winger you have to have a better centerman there, first of all. There’s plans with detail in to players, and I’m not going to get into a lot of that. We’ve had discussions and everything. As far as Jonathan Quick, when he’s healthy and he’s ready to play and the games are meaningful, he’s the best there is. It’s really difficult to play when the games aren’t meaningful, and I’d put him in that spot. That’s a tough spot for me to put him in. Jeff Carter? Yeah, we expect more out of him. Now, did I expect him to get back to 30 goals right away coming off that injury and being a year older? Maybe that was too much of an expectation.”

“I think you saw a little more of Jeff near the end with Kyle Clifford and Trevor Lewis. That’s a pretty good line. They had something going. They felt comfortable in that. But there’s an off-season here that I’ve got to do a lot of work with these guys and understand what they want and what I want and see where we go from there.”

This will obviously change, but as of today, Los Angeles has 19 players currently under contract in 2019-20 for a combined $72.2 (via CapFriendly) and Alex Iafallo, Adrian Kempe, Matt Roy, Sheldon Rempal, Michael Amadio and potentially Brendan Leipsic in need of new contracts as restricted free agents. There is also a squeeze in the 2020 off-season, when Tyler Toffoli, Trevor Lewis, Kyle Clifford, Derek Forbort, Paul LaDue and Jack Campbell will be eligible to become unrestricted free agents, and Carl Grundstrom and Austin Wagner will need new contracts as RFAs. Even amidst change to the roster and the push for youth, there will still be raises due for players ahead that will push the team towards but likely with ample headspace under the cap ceiling.

Asked whether a buyout of a player was an option this season, Blake responded, “Realistic in ‘there is an option to do that,’ yes.”

As far as how Phaneuf could potentially be affected, Blake acknowledged the team’s “options” while also highlighting the type of role and communication that would benefit the player and team under the new coaching staff. It’s not entirely different from the lines of communication that will exist between the team and Ilya Kovalchuk next season.

“Again, that’ll be the same type of thing,” Blake said. “There’ll be a discussion going forward, what your role will be, because that’s the role that you’re going to want to accept and go forward with – and then obviously look at our options, also,” Blake said. “I just met with him for a long bit. He was terrific in his attitude. It’s difficult when you get pulled out of the lineup, for sure. We had some young defensemen that were playing well and they wanted to get in there. But he stayed after practice, he did his work there, he did his work in the gym, and when he got back into the lineup, he can play. He’s very, very professional and got a real sense of what things were going on around here.”

It’s early. Between the coach and personnel, much is still in flux. The future of the trade market is unclear. They’re yet to make the fifth overall pick in the draft. But the players do understand that when a team falls well short of expectations, changes are made.

“I think we’re all prepared for that,” Drew Doughty said. “I don’t know what’s going to happen. I know obviously that our team’s not going to be the exact same as it was [Saturday].”

Though the team’s efforts will be centered around becoming younger and more skilled, and there’s the possibility that tenured champions with extended term could leave the group, Doughty denied that his outlook was that of a participant in a “rebuild.” He understands there will be change and has the confidence the team will be able to improve – but that “R” word was still a tough sell to the emotional pillar.

“No, my mindset will never be that.”