Well, that didn’t really help anybody. Except for the New Jersey Devils and, theoretically, the Buffalo Sabres. It definitely helped them. Crushing the Arizona Coyotes’ playoff hopes and allowing the Devils to gain ground in a near-dead heat for the second-best draft odds, the LA Kings played somewhat poorly overall in Glendale on Tuesday but relied on Jack Campbell’s excellence, a 6-for-6 penalty killing effort and the ability to hang in a game and win key moments in a 3-1 road victory. It was an inflated example of the team’s blueprint to win on the road during their best seasons – inflated in the sense that they hadn’t allowed 50 shots in over eight years. But you’re familiar with the general story: Jonathan Quick would keep them in a game, allowing them time to find their road legs, the penalty killing would be excellent, and they’d enter the third period tied before the inevitable regulation or shootout game-winner. And that’s what happened again in front of a tense and ultimately disappointed crowd that watched Arizona favor quantity over quality, much as they have all year as a middle-of-the-pack possession team that shoots a league-worst 6.53% in five-on-five play. But the overall performance, despite the lopsided shot total, did show character as Kyle Clifford engaged Lawson Crouse after a big hit on Alec Martinez behind the Kings net and potted a pivotal goal as part of a Gordie Howe Hat Trick , and the team as a whole moved past a dismal third period the night before to eke out a win against a desperate team. 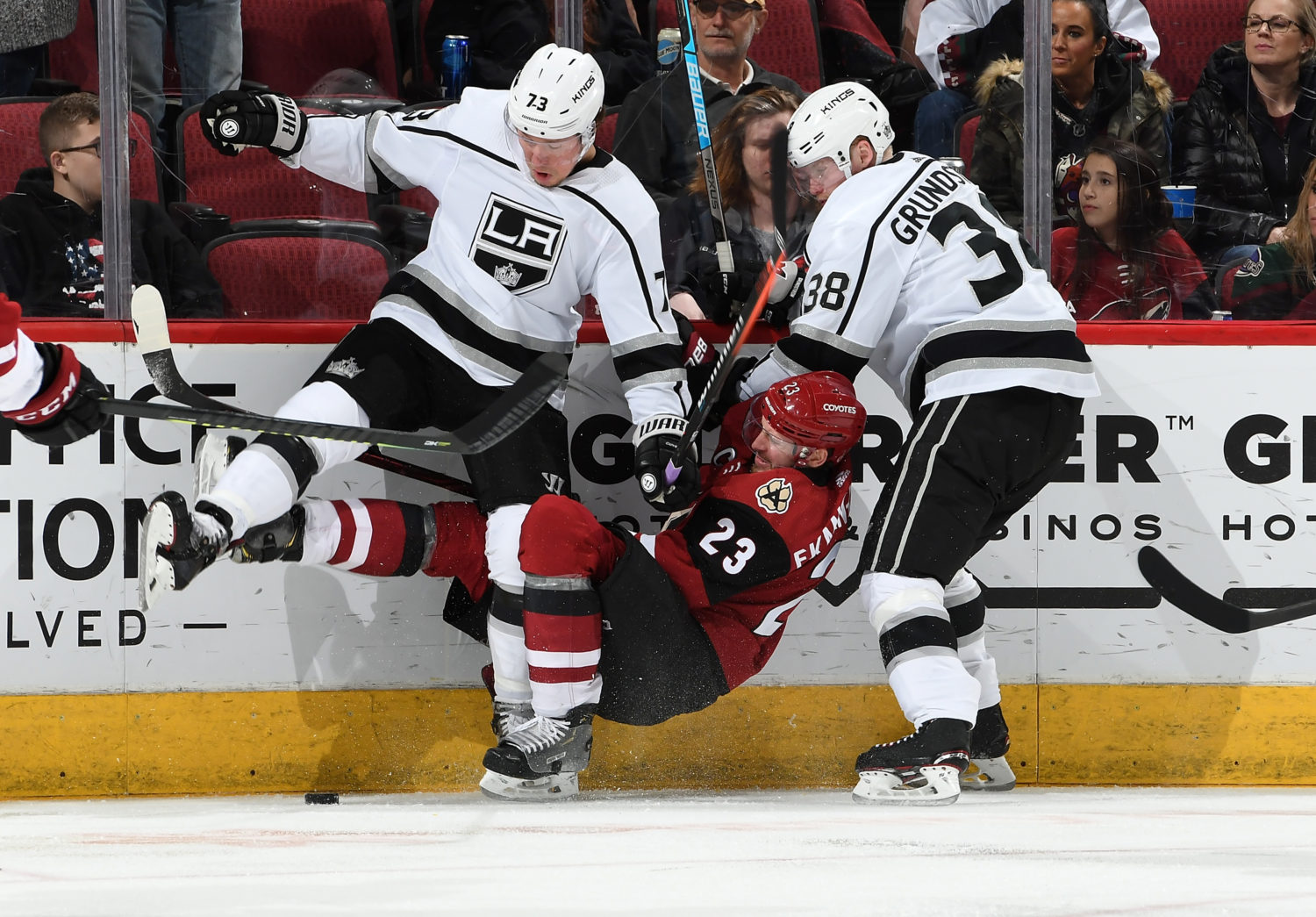 Did Arizona fail to generate Grade-A chances, or did Campbell deny those types of chances from materializing? In another excellent performance, he didn’t give shooters much of anything, and the Los Angeles defensive zone coverage did a good job of making sure most of those 51 shots were coming away from danger zones, as the heat map from this game shows hot spots in the high slot and the right point rather than in front of the goal. But in a performance similar to his outing against Calgary, Campbell was square to the shooter and wasn’t sending rebounds into dangerous areas, and his story is going to conclude as an very, very positive development this season. The Kings badly needed to rebuild their goaltending pipeline after a 2015 span in which they lost Martin Jones, J.F. Berube and Patrik Bartosak over a period of five months, leaving them with only one amateur goalie in the organization – Alec Dillon, whose career had stalled after a pair of hip surgeries. They couldn’t have done much better at a critical time with the trade for Campbell, followed one year later by the Cal Petersen signing, two acquisitions that have provided a wealth of talented depth at a position that some three years ago was nonexistent. No one knows what Campbell (or Petersen) do with a much longer leash in the NHL, and 2011-12 Quick – or even 2017-18 Quick – obviously shouldn’t be expected. But a widened sample size this year has come back overwhelmingly positive, providing good optimism at an important position in advance of the roster’s intended makeover. 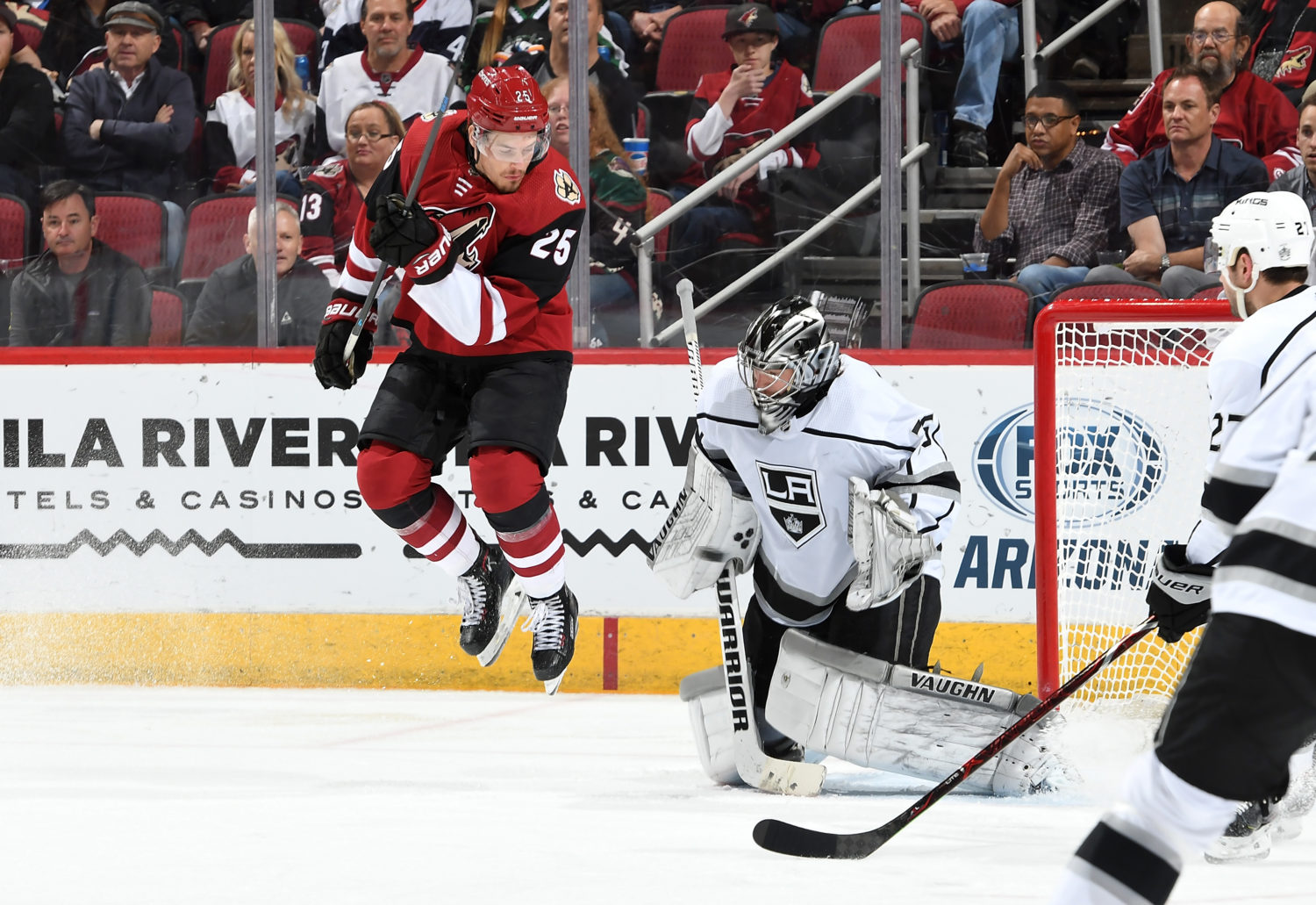 I’m not sure what cursed voodoo temple Gila River Arena was built on, but enough already with the Coyotes, Vengeful Sonoran Deity. With a tragic number of one and two games remaining, Arizona is en route to missing the playoffs for the seventh straight season since winning the Pacific Division and advancing to the Western Conference Final in 2012, and to lose their character, red-hot goalie to injury while in the process of surrendering the game-winner on the biggest night of the season is some cruel justice. Darcy Kuemper was making his 21st straight start, and while it’s natural (and valid) to praise a scrappy, injury-blasted group buying in under Rick Tocchet, let’s not get carried away here: Kuemper had a .941 save percentage during his run and is the prime reason behind the playoff push of a team that was 23-26-5 on February 7. Gaining one point from an Eastern Trip put them in a precarious position in which their season ultimately was coming down to one or two games, and they ran into a hot goalie Tuesday night. They’ve lost 374 man-games to injury, have been without their intended starting goalie since November and their major in-season trade acquisition since late December. It would’ve been special to give the fans that brave rush hour traffic towards Glendale a little bit more than a playoff race, but they’re not headed in the wrong direction. Perhaps next year the team will be healthier and less of a scoring burden will be placed on Clayton Keller and Alex Galchenyuk, a pair of players capable of producing beyond 46 and 40 points. Rick Tocchet, who wasn’t hired until more than two weeks after the 2017 NHL Draft, seems to be a very good fit for a team that took strides late in 2017-18 and will bank on good culture players in Niklas Hjalmarsson, Derek Stepan and Brad Richardson to help get the most out of a young group that must improve its offense from this year to next. 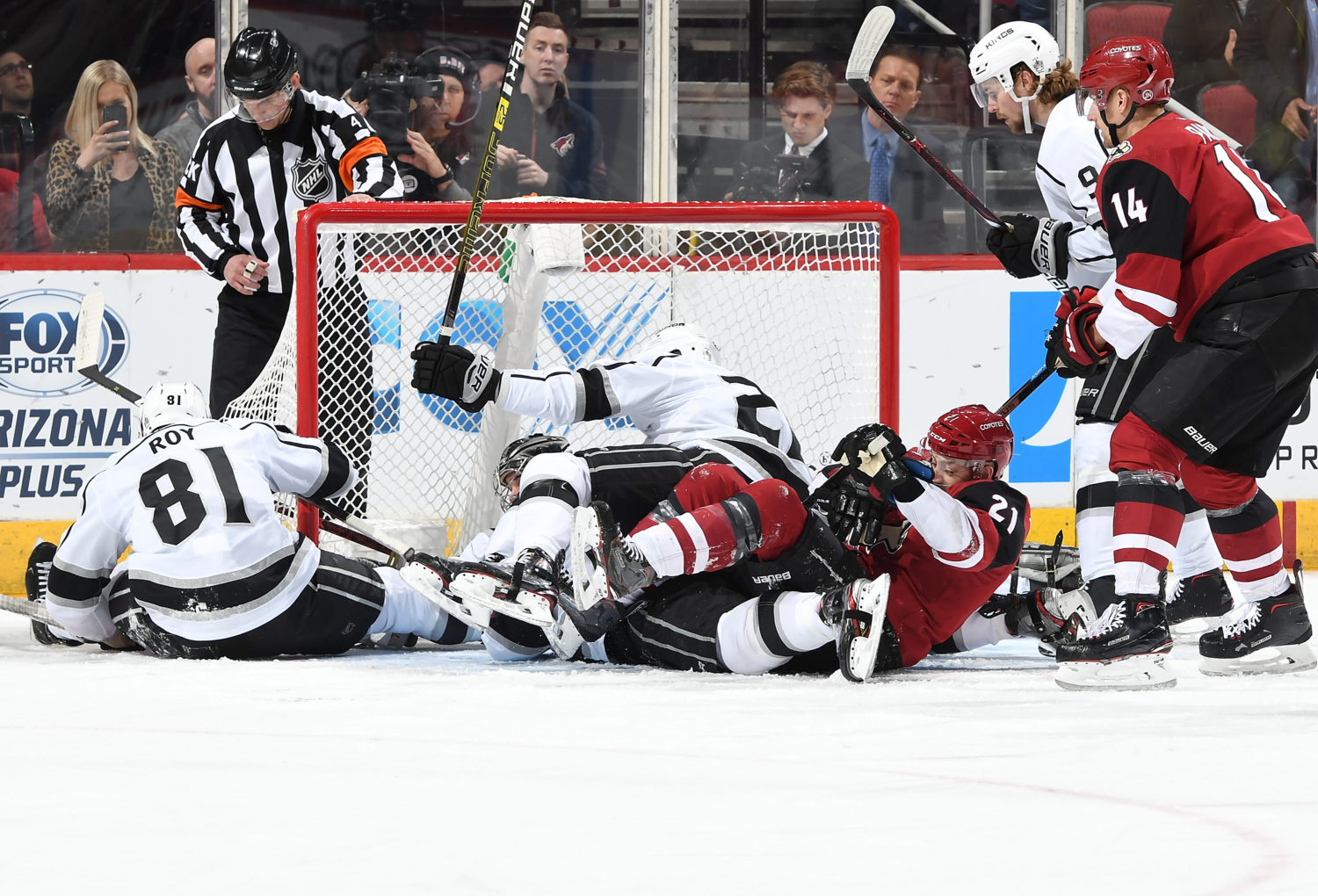