Several junior and college-based prospect notes in advance of the NCAA tournament and while the first round of playoffs across the Western Hockey League are underway:

— The NCAA tournament begins Friday and will culminate with the Frozen Four at KeyBank Center April 11-13. The only Frozen Four LAKI has attended was in Buffalo! (Curse you, Thomas Vanek.) Needless to say, after the Wolverines blew a 2-0 lead and lost in overtime to Minnesota in the 2003 semifinal, we did not remain in Buffalo for the two extra days.

Second-Team All-NCHC goalie David Hrenak and top-seeded St. Cloud State face American International in Fargo, N.D. at 4:30 p.m. PT on ESPN3, while Mikey Anderson and Minnesota-Duluth are seeded second overall and will face Bowling Green at 1:00 p.m. PT on Saturday in Allentown, Pa. on ESPN3. This may provide some rooting conflicts among Falcon alumni in the Kings organization; Bowling Green hasn’t qualified for the tournament since the Rob Blake-Nelson Emerson-Dan Bylsma triumvirate made the third of three consecutive appearances in 1990. The winner of St. Cloud and American International will face the Ohio State-Denver winner in an awfully tough bracket, while the UMD-BGSU winner faces the winner of Arizona State-Qunnipiac. It’s the Sun Devils’ first-ever NCAA appearance.

As for Anderson, he finished with 11 points in his final eight games while earning an All-NCHC Honorable Mention nod, and the team is bullish on where he’s at, with one source saying he’s “without question” ahead of the development path originally envisioned. 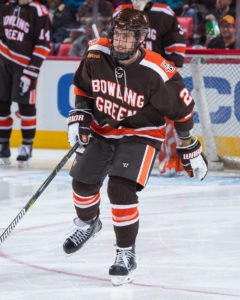 — More on Bowling Green. The Kings have been a regular presence at the low-ceilinged Slater Family Ice Arena, and a hockey operations source have said that they’re giving junior forward Lukas Craggs an extended look. Craggs totaled 13 goals, 24 points, a plus-19 rating and, ahem, 114 penalty minutes in 34 games and profiles as a very good skater, physical presence and agitator capable of winning puck battles and forcing turnovers and takeaways. The 1996-born left-handed shooter stands six feet and weighs 190 pounds. Unless the Falcons advance to the Frozen Four – that’s a tall ask for a team seeded 15th overall – he could make a decision as soon as this weekend. Assistant General Manager Michael Futa and Emerson, the team’s Director of Player Personnel, were in Mankato over the weekend to take in the Falcons’ WCHA Championship win over Minnesota State.

— Los Angeles also continues to make a push for Clarkson center Nico Sturm, a 23-year-old left-handed shooter who has drawn significant interest across the league and is the highest-profile NCAA free agent since Ottawa native Max Verroneau signed with the Senators. (Los Angeles was hot on the tail of Ottawa-native Verroneau, who attended their development camp last summer, among others.) Sturm, who is German but not related to Marco Sturm, is a good skater and, according to Ryan Kennedy of The Hockey News, “a responsible center with great size, so he can play NHL games right away next season if he wanted to.” He’s a Hobey Baker finalist whose Golden Knights will face Notre Dame in their tournament opener Friday at The Jungle, aka ManchVegas, aka, sigh, SNHU Arena. ESPNU will have the broadcast at 3:30 p.m. PT.

— 2017 fifth round pick Cole Hults is likely to return to Penn State for his junior season, according to hockey operations. That was expected, but Hults, who turns 21 in two months, has logged massive minutes for the Nittany Lions over the past two seasons and was 19 when he entered college. He was All-Big Ten honorable mention who played top minutes against the conference’s top players and, according to a hockey operations source, is ahead of where Matt Roy was at the same point in their development paths. Penn State is a very interesting team that would likely win the Corsi Hockey League as a team that will shoot from just about anywhere, and Guy Gadowski has done a tremendous job building up that program from scratch. The decision on whether to sign this season or wait will ultimately be up to the player, but the Kings would be comfortable if he decided to go back to Penn State, where he’ll develop and face good competition. The Nittany Lions, whose program gained Division I status in 2012-13, lost to the Fighting Irish in the Big Ten Championship and will miss the NCAA tournament after making back-to-back appearances.

I’ll have more on tonight’s first intermission Rosen Report, but here are a few recent conversations I had with Mark Yannetti and Mike Donnelly about Aidan Dudas. For more on Akil Thomas, who recently signed a three-year entry-level contract, click here.

Mark Yannetti, on Aidan Dudas’ work ethic and ability to thrive even though his team traded assets:
Not that he’s one to hide – he certainly isn’t – but once they shed all those guys, he couldn’t hide. Now it was up to him. He always played a secondary role, and he’s always wanted a primary role, there was no question. But once you get that primary role, you better deliver, and I thought he did. He took a pretty good onus on himself this year. His competitive level and his nature shone through, right from day one. I think he’s done very well. He’s done everything he’s needed to do, everything that’s been asked of him, developmentally-wise. His skating looks a full step better. I think he needs to find another half a step, but if he can do what he did this summer, he puts himself into a position to be a bona fide upper-level prospects. He’s got to take the exact same step one more time. His skating’s got to get better. But his skill is there and his competitiveness is there. He’s got the right kind of chip on his shoulder. It’s just a matter of him finding it. Probably a half-a-step is my guess.

Mike Donnelly, on Aidan Dudas’ skill set and work ethic:
As I watched him throughout the course of the season, I thought he showed flashes of playmaking, flashes of some offensive ability. The last time I saw him in Windsor, he’d really raised his level of compete. He worked really hard, he was creating offense, he was making plays, he scored a goal. He has a big part to fill at Owen Sound. He’s getting a lot of opportunity, and it’s good for him, it’s good for his development. He’s a young kid, too. Sometimes when we’re evaluating him and we’re trying to project him, we’ve got to remember he’s really young. I think he’s come a long way this season, and I was really impressed with his work ethic the last time I saw him play last week.

Donnelly, on the next layer Dudas can add:
For him, it’s interesting. I think it was in Kitchener, I got there early one day and I talked to their coaches before the game, and I was just kind of sitting outside by their locker room and he was running their dynamic warm-up and was one of the leaders in there, and that’s always encouraging. Our scouts do a really good job of drafting really good people, you know what I mean? Kids that want to work hard that are good, character kids, and I think over the course I’ve been here, they’ve done an unbelievable job of that as far as character players. Dudes is a fun kid to be around, he’s got a lot of energy and he wants to get better. I remember early in the year, he scored an unbelievable goal, and I’m like, ‘hey, send me that goal,’ and he said, ‘oh, you saw that? That was awesome!’ He’s got a lot of energy and he’s got a lot of skill and there are some things in his game that obviously we expect him to improve on. I think he’s going to be a great student and a lot of fun to work with.

Donnelly, on Dudas’ responsible play:
They wanted to utilize his speed, so Todd Gill, when he was coaching there early in the season, he moved him to center, so Aiden was playing a different position, so that was a learning curve for him. He’s a smaller player, so he had to learn a different position. For us moving forward, we want to be able to teach him to play in all zones, obviously, but like I said, I was really encouraged with the progression he’s made. And, you know what? It’s a tough situation. When they traded away all their good players, that whole team, they really competed hard the other night when I saw him, and Aidan was really good and it was fun to see. 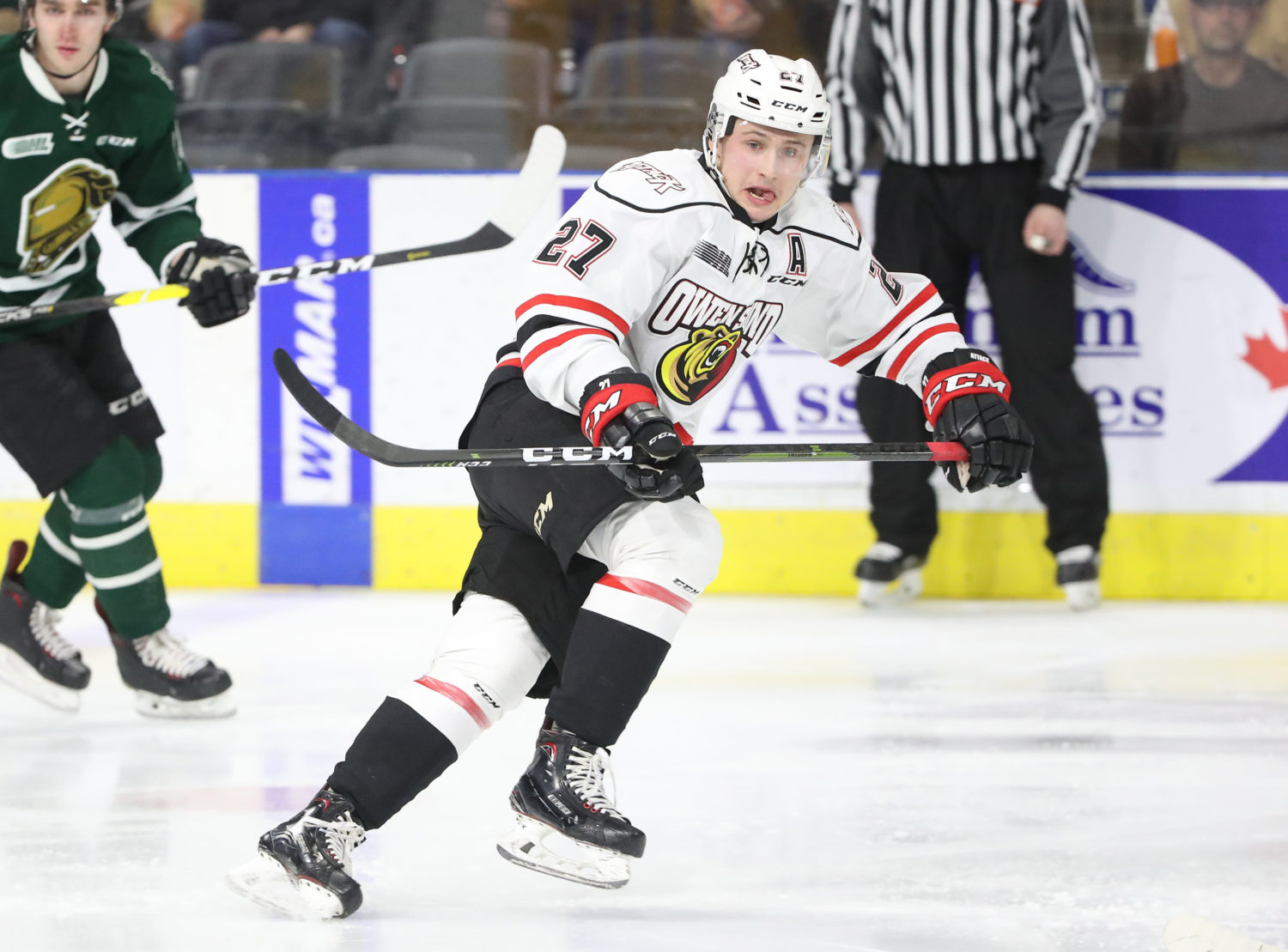 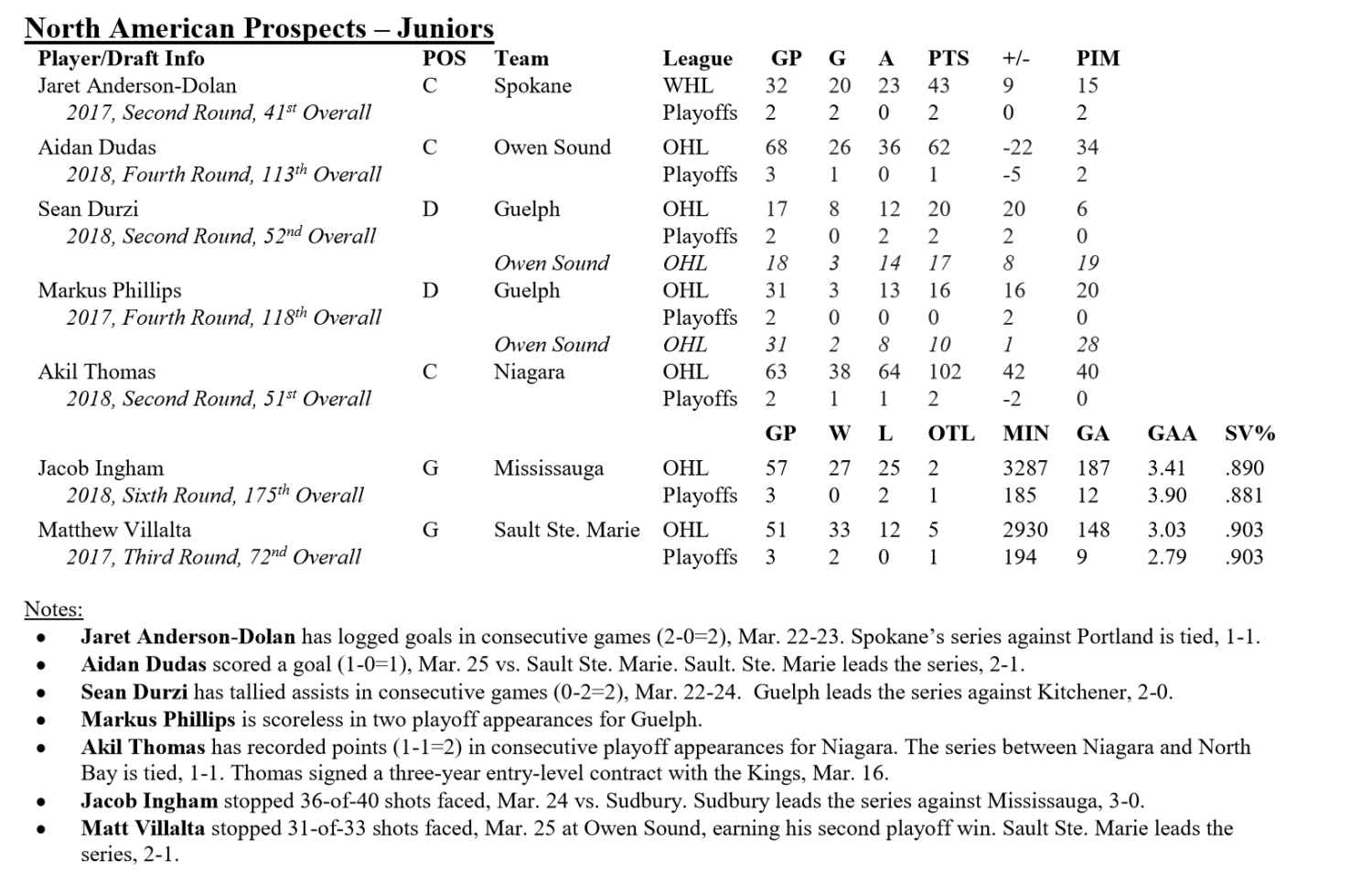