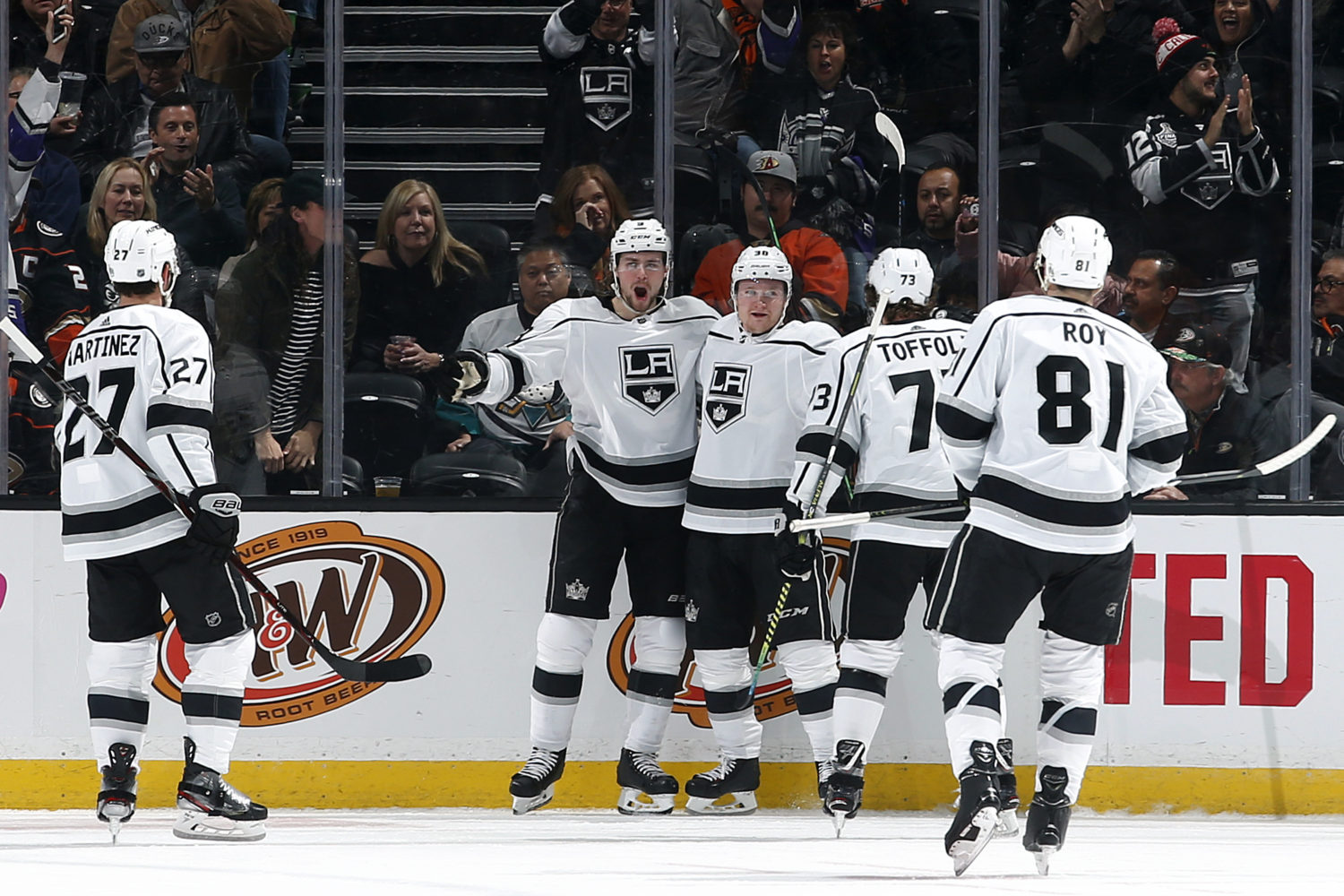 Willie Desjardins, on the team structure and defensive performance in the win:
Yeah, we had a good first period, well, first half of the game we played pretty strong. I thought we had all our guys going, and when you’ve got everybody playing, it’s good.

Desjardins, on Carl Grundstrom’s goal:
Yeah, it was a good goal. It started down low. He worked hard to catch the play. He made the play behind the net and then he caught up, went to the net. He does a good job going to the net. Kempe’s played good. He made a good play. Ty made a good play at the line to hold the puck.

Desjardins, on any diminished meaning in the rivalry, given both teams’ standing:
We played them before. You knew right off that it was a pretty competitive atmosphere with both teams. And if you look at the history, both of these clubs have had really good teams for a number of years, so it’s not surprising that they’ve played lots of big games. It’s always good when you get to be a part of a challenge like that.

Kyle Clifford, on limiting Anaheim’s shot attempts:
I thought we played a real structured game early and that allowed us to get on the offensive side of things and when we get the puck it’s tough for them to score and generate scoring chances, so overall I thought we did a really good job for 60 minutes.

Clifford, on the physicality of the game:
We’re both not in playoff spots, but we’re still playing for pride and they’re a rival over there, so we always come out prepared to win and play hard. I think they do the same too, so it’s definitely a grind.

Clifford, on scoring a career-high eight goals this season:
Two big things is skating and shot selection. Where before I was kind of getting locked in on shooting in one area, now I’m kind of picking my head up and almost picking the spots a little more and just being an all-around smarter player.

Clifford, on holding the game defensively after scoring early on:
Classic Kings’ hockey — 3-2.

Carl Grundstrom, on scoring two goals in his first two NHL games:
I got a good pass from Juice there, but just I got a breakaway and put it in.

Grundstrom, on his fake on Miller before shooting backhand:
It was a good pass from Juice, so just tried to make a fake and put it in.

Grundstrom, on the adrenaline kicking in when playing on consecutive nights:
Pretty much, of course. Probably going to settle down after a while.

Grundstrom, on whether he viewed being traded to Los Angeles as motiviation:
Of course. I saw it as an opportunity, so I think it was really good for my career.

Grundstrom, on the texts and calls he received yesterday after scoring his first NHL goal:
I got a couple, that’s for sure. That was funny.

Grundstrom, on developing chemistry with his linemates:
I think we play really good together. We all three play really fast and want the puck, so that’s really fun to play with these two guys, for sure.

–The Kings’ streak of allowing at least three goals ended after eight consecutive games. The last game they held their opponent to under two goals was the 2-1 loss at Nashville on February 21.

–Dustin Brown’s first period goal ended a streak of 186:22 in which Los Angeles was either tied or losing. Prior to his goal, the Kings last led at the end of Saturday’s 6-3 win over Chicago.

–Carl Grundstrom became the second player in franchise history to record a goal in each of his first two NHL games. The last time it happened was when Brian Boyle scored goals February 2, 2008 at New Jersey and February 5, 2008 at the New York Rangers. He has taken two career shots, scoring on both. On Sunday, he appeared in 18:15, 2:54 of which was spent on the power play. He totaled five shot attempts, three hits, a blocked shot and an even rating.

–In his 59th game of the season, Kyle Clifford set a career-high with his eighth goal. Clifford had previously scored seven twice – including the 48-game 2012-13 season – and six goals three times.

Monday, March 11 is an off-day for the team. The next practice is scheduled for Toyota Sports Center at 10:00 a.m. on Tuesday, March 12.