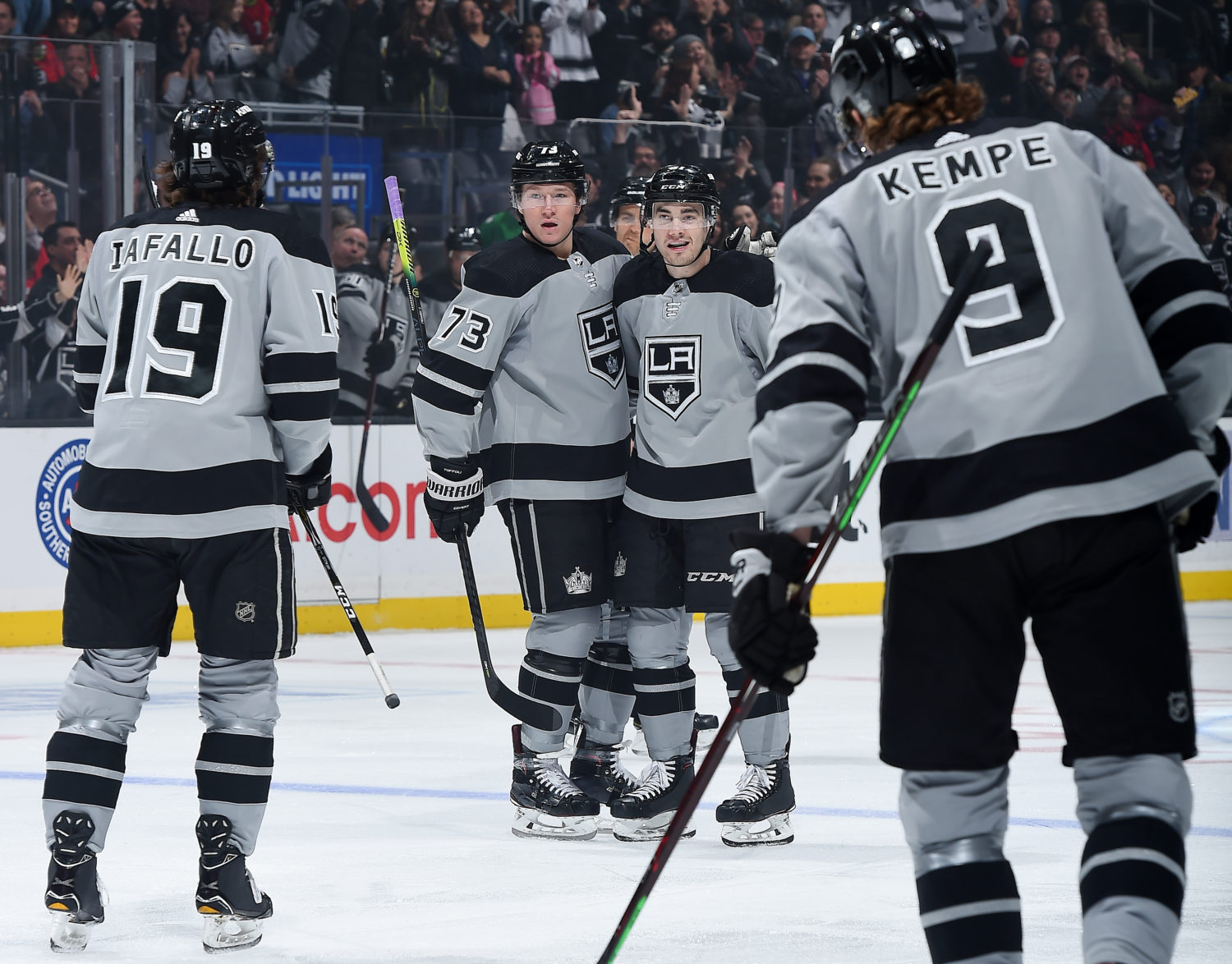 Willie Desjardins, on ending the losing streak:
Yeah, it’s been a long time. It’s good to get a win. I thnkn that we played pretty good against Dallas. I thought this was a tough game. Like, I didn’t think our start was great. We were good on the power play – we got a couple a on the power play, and in the end, it’s just a way better feeling when you win.

Desjardins, on how getting points from 10 players makes it “tough on an opponent”:
It does. I think that’s a good thing, though. Our young guys, they’re getting a little bit more ice time, and it’s great to see them score. That’s a good sign for the team when you’re not just relying on your veteran players or your older players, so it was good. It wasn’t just their scoring. Their overall play was good.

Desjardins, on whether he had an update on Austin Wagner:
No, he’ll have to get checked. I’ll imagine tomorrow, and we’ll find out where he’s at.

Desjardins, on whether the win provided a sense of “relief”:
I think there would be a sense, for sure. There’s just so many good NHL teams that any given night you know you’re in for a tough game. For us, it was nice to get a win. Being back at home, hopefully we’ll be able to get a few more.

Desjardins, on the power play’s improvement:
I think Marco Sturm’s done a great job with it. I think they’ve spent time with it, they’ve worked at it. We made a few changes on it, too, a few adjustments. It was good. Like, other games we’ve had chances, they just didn’t go, but tonight it was good they went.

Desjardins, on whether Corey Crawford had an off-night:
I don’t know. Maybe there’s one or two he’d like back, I think, but he also made some big saves. Like, he made some really big saves as well. I think in the end it works out. He’s a good goaltender, and I’m sure maybe he’ll want one of them back, but we could’ve scored on that breakaway, too. In the second we could’ve put it away earlier, so he made some big saves.

Kyle Clifford, on how good it feels to get the win:
I thought everybody played well tonight and that’s the way we’ve got to play every night. It just shows what we’re capable of when we’ve got a consistent team effort and play a full 60.

Clifford, on day games having been a challenge for the team in the past:
Yeah, you know we just prepare for every game like it’s the same whether it’s at 1:00 or 7:30 and it’s just nice to win.

Clifford, on whether the team had fun in today’s game:
Yeah, you know winning’s fun. So, simple answer.

Clifford, on five different players scoring and 10 different players earning points:
It’s huge. You look at all the good teams, they’ve got scoring up and down their lineup so it’s just good to get contributions from everybody. Some were on the scoresheet and some weren’t.

Clifford, on responding to the Blackhawks tying the game up in the second period:
I thought we just stuck to our game plan and tightened it up a little bit. Played our style of hockey.

Clifford, on what he was thinking when Connor Murphy tied the game at 3-3:
Yeah, score the next goal.

Adrian Kempe, on today’s game boosting the team’s morale:
… a few losses and stuff like that, so obviously it’s been a tough time, but I think other than the first ten minutes in the second period, we were the better team and we played good as a team and scored a lot of goals so that was big for our confidence.

Kempe, on getting contributions from up and down the lineup:
Like as I said, confidence is a big thing and when you get confidence you play better and I think that’s kind of what we needed to get going here. I think this was a perfect game to get everybody going and now we’ve just got to keep going here. We have some games left and everybody’s got to step up the way we played tonight. Hopefully we can keep that going.

Kempe, on starting the last few games with a strong first period:
Obviously you want to play — home games are really important — you want to play good in front of our fans and our building and we know that we want to make it tough on the teams coming in here. Obviously there’s some games that we haven’t had that good of a start, so obviously that’s one thing we wanted to think about before games is that we make sure that we come out hard and get the pucks deep in the beginning. I think we’ve done that in the last couple of games and it probably has been good too, so we just have to keep that going.

Kempe, on how it feels to break the team’s losing streak:
Yeah, kind of relief. It was a big win, but everybody’s been in a good mood lately. Obviously there’s been frustration out there, but I mean we just stuck with it and I think our last couple of games have been tight and we haven’t really got our bounces with us. So, just kept battling through it and tonight we had a win, so that was great for the team.

Brendan Leipsic, on getting contributions from multiple players in the lineup:
Well, it makes it pretty tough, unless they score seven goals, right? So it was good to get contributions from everybody. Nice to see our power play click early. We gave up a couple there in the second, but we played on our toes the rest of the game, got a win.

Leipsic, on whether there is a sense of relief now that they have broken their losing streak:
We’ve been in a lot of games lately. We’ve let them slip away in the third a little bit, so it’s nice to get one early there. And then didn’t step back too much. Didn’t give them a whole lot. I thought our forwards did a good job of coming back. Our defense stepped up at the line and denied some of their entries which is what they do best.

Leipsic, on shutting down the Blackhawks’ top two lines:
You’re not going to keep them quiet all night, but you want to do your best to contain them. They’re elite players that are going to get their chances so you just try and keep them at a minimum and keep them to the outside and when you do have time to pressure them, pressure them. They’re going to make plays, but I thought we for the most part did a good job on them.

–With the win, Los Angeles improved to 86-89-22 all-time against Chicago, a record that includes a 45-41-11 home mark. The Kings are 8-3-0 in their last 11 games against the Blackhawks and with a record of 2-0-0 assured themselves of a winning record in the season series for the fourth consecutive year. These teams have one game remaining, March 30 at Staples Center.

Sunday, March 3 is an off-day for the team. The Kings’ next practice is scheduled for 10:00 a.m. on Monday, March 4 at Toyota Sports Center in El Segundo.

Austin Wagner didn’t return to the game after colliding with Gustaf Forsling and crashing into the corner boards:

Wagner not on the bench after this hit with Forsling: https://t.co/93LZNWAvPz#CHIvsLAK #Blackhawks #GoKingsGo #LAKings pic.twitter.com/y3hF5GSpO9

While Connor Murphy scored Chicago’s third goal on the ensuing rush in the other direction, Wagner skated gingerly back to the bench and remained there briefly before heading down the tunnel to the dressing room. He didn’t return, with a team public relations representative noting that he suffered a lower-body injury. As shared by Willie Desjardins above, the team will have a better sense of the extent of his injury after an evaluation tomorrow.