Alec Martinez suffered an upper-body injury late in the shootout loss to Vancouver on Thursday and is expected to miss one-to-two weeks, according to the team.

“It happened right at the end of the game, just about the last play of the game,” said Willie Desjardins, who added that there was contact on the play and that the injury was not an aggravation of his previous upper-body ailment. Via the game log, Martinez blocked a shot on each of his two overtime shifts, one from Brock Boeser and one from Bo Horvat. That’s not a confirmation that the injury occurred on one of those plays, but does provide a touch of (perhaps meaningless) context.

Sean Walker, who was injured when Ben Hutton’s shot deflected off his own stick and directly into his face, did not lose teeth or suffer a facial fracture and is day-to-day. He did not skate with the team on Saturday.

In the wake of the injuries, the LA Kings recalled 23-year-old right-shot defenseman Matt Roy from AHL-Ontario, where he has eight goals and 29 points in 45 games. The 6-foot, 208-pound defenseman selected in the seventh round in 2015 out of Michigan Tech has always been known as a sturdy, poised defensive defenseman with good character and leadership traits.

“He’s a part of our core group that we rely on as a coaching staff and he’s one of those guys who doesn’t typically say a lot within the locker room, but when he does, he’s got the respect of his teammates,” Ontario coach Mike Stothers said in January. “He prefers to just lead by example and just making sure that he’s doing his job well and correctly. It’s a good example of the other guys. You don’t have to be a ‘rah-rah’ guy to be a leader, you have to be a prepared guy and Matty Roy, there’s not many that prepare better than he does.”

With the recall, the Kings have the maximum 23 players on the active roster.

During early-season Ontario check-ins, evaluations of Roy’s game were coming back universally positive. This is a challenging year for a much younger Reign blue line, which has pushed top defensive prospect Kale Clague into a wider role than most 20-year-old first-year pro defensemen inherit. While I was checking in on Clague during a strong run of play late in the first half, it was indicated that while Clague’s game had been coming along, it was Roy who’d likely be the next defenseman recalled after Sean Walker by virtue of his additional year playing within the Los Angeles system, and, quite simply, because he’d gone out and earned it.

Roy had never been known as an offensive-minded defenseman, but because of his sturdy, all-around game, he led Ontario in defensive scoring at the time of his recall and has spent a lot of time working with Mike Donnelly of Kings Development on his shot.

“I think Matt’s been our most consistent, reliable, dependable defenseman game in and game out,” Stothers said. “The thing with Matt is, he just does all the little things well. Very seldom does he bring attention to himself by trying to do too much. He’s not going to go end to end usually but that’s the beauty of the way he plays, it’s a quiet game, it’s a steady game and usually that’s the sign of a good defenseman. When you don’t really notice him, and not notice him for all the right reasons, that’s a good thing. He’s a good leader, he’s a good person, he prepares well and it’s good to see him have the results he’s had this year.”

Roy was paired with Dion Phaneuf during the morning skate in advance of Saturday’s Hockey Night in LA game against the Boston Bruins (7:30 p.m. / FOX Sports West / FOX Sports app / LA Kings Audio Network). When he plays tonight, he’ll become the Kings’ fourth seventh-round draft pick since 2009 (of 10 total) to play in the NHL (also: Jordan Nolan, Nic Dowd, Jacob Middleton). Another, Nick Ebert, was traded to Dallas for Jack Campbell in 2016, while Dominik Kubalik was traded to Chicago in late January for a fifth-round pick. 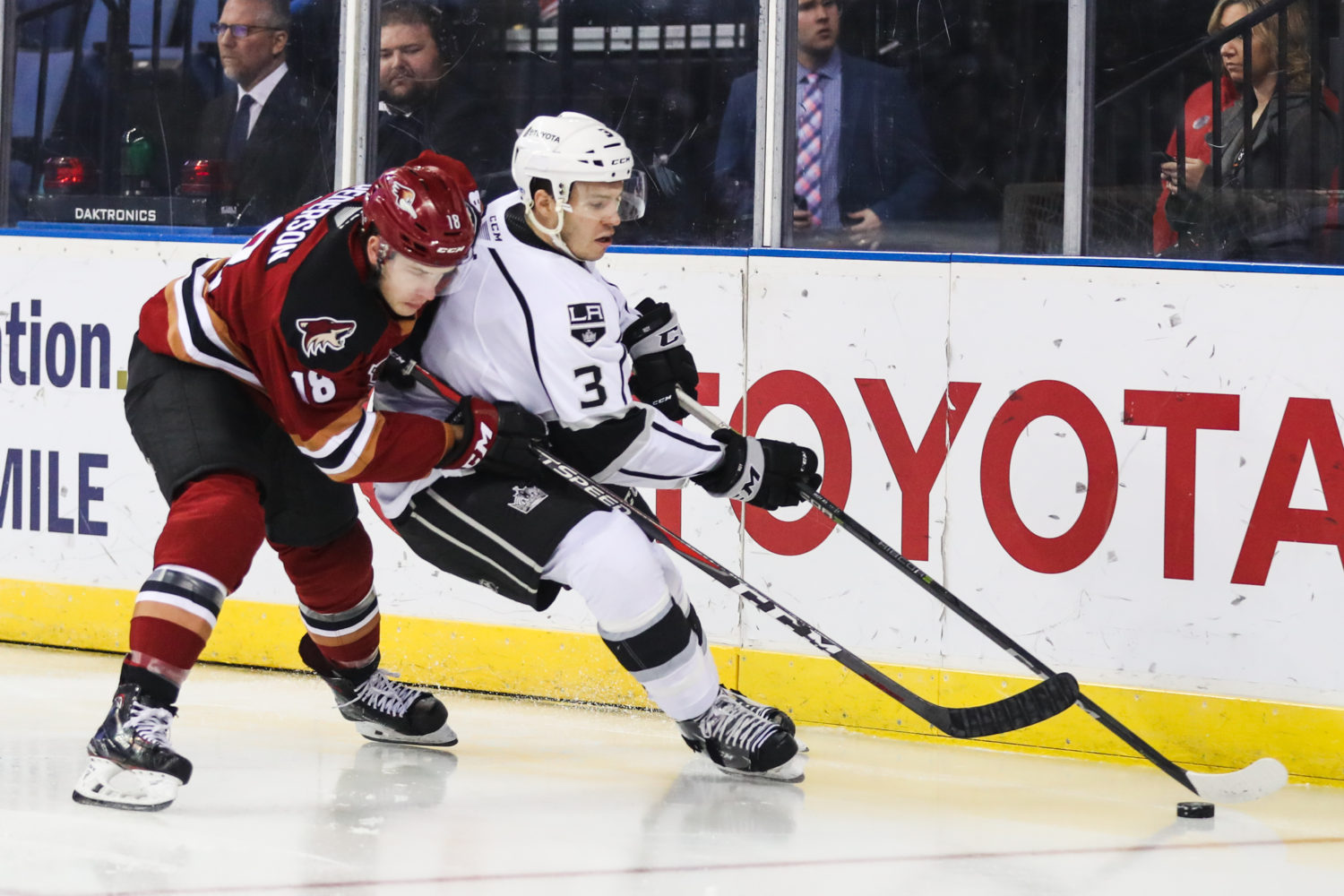 Mike Stothers, on Matt Roy’s shot (from January 15):
He spends a lot of time in the offseason working on his shot, getting it away quicker, getting more accurate and trying to get a little bit more torque behind it, to get a little extra on it, but he also knows when to lay off and make sure, rather than the big wind up, make sure he just gets it through so it’s not getting blocked. The biggest thing for defensemen now is teams are so good at getting in the shooting lanes, fronting pucks and blocking shots, that they really don’t have time. They’re got to get it and then get it to the net front as quick as possible. It’s not too often now that it’s a real bomb that beats a goaltender, it’s the ones that they haven’t had a chance to get set up for, or get out and challenge, and if you’ve got the proper net front, the ones they don’t see, so just hit the net.

Stothers, on the biggest progression in his game, year-over-year (from January 15):
I think the defense core has changed and now he’s relied upon more. The minutes have increased for him, the responsibilities have increased for him and I think he’s really welcomed that added responsibility both on and off the ice. He’s now looked at as the guy that’s supposed to help develop the younger guys, a situation that he’s familiar with because he’s not far removed from being one of those young or inexperienced guys that was looking for the guidance. When he came to us, he was a little bit older too, he’s a college guy, so it’s not like he’s fresh out of juniors. He’s got a maturity about him already, that sets him apart from other guys. He’s pretty flipping good.

Matt Roy, on his season in Ontario:
I just try to keep it simple out there, get the pucks on net, and personally, I’ve been getting bounces, and sometimes that’s the way it goes, so I’m just trying to play a simple game. 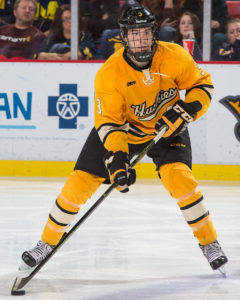 Roy, on influences from growing up amidst the Detroit Red Wings’ dynasty:
I grew up watching guys like Lidstrom and Shanahan and Yzerman – guys like that. I guess the biggest role model for me was Lidstrom, just kind of watching his game and seeing what he does. [Reporter: How many games a year would you go to? Were you ever able to make it down there?] Usually I’d practice on their game days. I watched basically every game I could on TV, and sometimes even during practice I’d kind of peek in the main lobby area and look at the TV.

Roy, on envisioning his first NHL game:
I try not to think about it too much. I’m just going to go out there, try and play my game and help the team as best I can.

Roy, on how he’s worked on his shot:
Just getting it past the first defender, trying to get the pucks on net. I may not be scoring every shot, but hopefully there’s traffic down low, which there usually is, and that gives our forwards the ability to bank it in there. It’s something I worked on my whole life, but I don’t really think about it too much. I just try and get pucks on net.

Roy, on working with Sean O’Donnell:
Yeah, O’D’s been good. He’s been good to me, especially the last couple years here, ever since I signed. I worked a lot with Mike Donnelly and basically the whole development staff – they’ve all been really good to me. [Reporter: Stutts, too? Has he been a big influence on you?] Oh, yeah. Stutts and David Bell, they’ve been great with me down there and I’m very thankful for them. [Reporter: What did Stutts say when he found out you got the call?] He just kind of pulled me into his office after the game and just kind of smiled at me and said ‘congratulations.’

Roy, on how cold it was in Houghton, Michigan two weeks ago:
Oh, God. It’s more snow than the cold up there. I think they get 300 inches usually up there. It’s a different world. It’s like living in a snow globe.