Long before they were joined at the hip during rookie seasons that culminated with a Stanley Cup championship, Tanner Pearson and Tyler Toffoli were actually fierce, emotionally driven rivals on a pair of Eastern Conference Ontario Hockey League teams. They finished second and third in the league in scoring in 2011-12 – Toffoli with 52 goals and 100 points for the Ottawa 67’s and Pearson with 37 goals and 91 points for the Barrie Colts – in a competitive push that boiled over when Pearson, who would be drafted 30th overall by the LA Kings that June, slashed his future teammate in the face during a regular season game.

Don’t expect such ill-natured shenanigans in their second head-to-head battle since Pearson’s November 14 trade to Pittsburgh.

“No, he knows better than that now,” Toffoli said.

Pearson, who had two third period goals in Pittsburgh’s come-from-behind, 7-4 victory in Anaheim on Friday, has ably been picking up the pieces after a calamitous 17-game, one-assist stretch with Los Angeles that reached a low as he was “really frustrated on the bench” during the Kings’ 5-1 loss to Toronto at Staples Center, according to Willie Desjardins, his last game as a King. He has eight goals and 12 points in 28 games with the Penguins and says that he’s been comfortable ever since the move.

“I think [I had] a big-time fresh start, but the [17] games happened in the past, and I looked at it as another sixty, as kind of the season,” Pearson said. “And we did a good job with that and I’ve been playing well, and it took me a few games to get into it, especially the style of play – it’s a bit different and especially depends on who you’re playing with in the center. But, I think as each period went on it got easier and easier until maybe like three games in, four games in, it was pretty natural.”

His first point in Pittsburgh was an assist on a Phil Kessel goal. He has skated with Sidney Crosby and on Saturday will return to Staples Center for the first time on a line centered by Evgeni Malkin. Pittsburgh is 18-7-3 since the trade, rising up into second place in the Metropolitan Division.

“I think obviously I lucked in out in my situation, getting traded here,” Pearson said. “With the history that the Kings had just prior to when I was there, and then what happened when I was there, it was a winning history, and obviously the last couple years haven’t gone their way, but then coming here, you come to an organization that’s won back-to-back cups in the last three years, so they know what it takes to win and it’s kind of the same mentality.”

This is, of course, not the first time he’s faced the Kings. He had a firsthand view of a disallowed Tyler Toffoli goal after an off-sides review during the teams’ meeting at PPG Paints Arena on December 15, which brought back a few fun memories of their special – if occasionally askew – combination.

“The first time I lined up against them was when his goal got disallowed, so it was pretty funny,” he said. “I think what I said to him was, ‘at least it’s not me going off-side anymore.’”

He also scored a goal by becoming one of the very few over the past month to take advantage of Drew Doughty during Pittsburgh’s 4-3 overtime win. 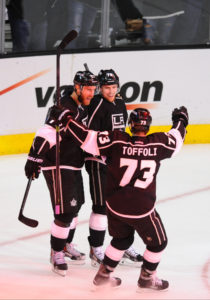 Tonight, fans will be able to salute Pearson, one of 31 players to be engraved on the Stanley Cup as an LA King. A video tribute will welcome him back to Staples Center during the first media stoppage of the first period.

“I haven’t thought about [the recognition] too much,” he said. “I think it’s one of those things, you just go with the flow and, you know, whatever happens happens. It’ll definitely be weird, though.”

Traveling as an Eastern Conference team is less strenuous than it is as a Western Conference team, a notion Pearson shared with his new teammates when a recent flight to Winnipeg drew some groans. Pittsburgh actually traveled a day early to Los Angeles, arriving Wednesday night and practicing at Toyota Sports Center Thursday before Friday’s win in Anaheim, allowing him to see his teammates in a less competitive setting than their most recent reunion last month.

“You just look at him, you smile, you talk to him after the game or whatever it is. It’s the same with a lot of the guys you play against,” Toffoli said. “I feel it’d be similar to Kopi and Justin Williams – the same relationship.”

That it began with a slash in the face, and continued while both were commended forward prospects battling for a role on a team that didn’t always have the roster space, and then flourished as they flanked Jeff Carter during their Stanley Cup run is a testament to the chemistry they’ve developed both in and out of the trenches.

“I think it was pretty easy, to be honest,” Toffoli said. “We never had battles in the locker room in Manch, but we always had that subtle little competition of scoring more goals or playing better, getting called up first. You know what I mean? Those little things like that. That made us grow together, and obviously there were times where we probably didn’t want to hang out with each other, but it made us better friends. Just going through the things we went through, with winning, losing, with everybody else on the team that we won with, I feel like you’re friends forever. The experience of winning, especially what we went through that year, was incredible and an experience that nobody is really going to ever understand unless you were here with us in the locker room.” 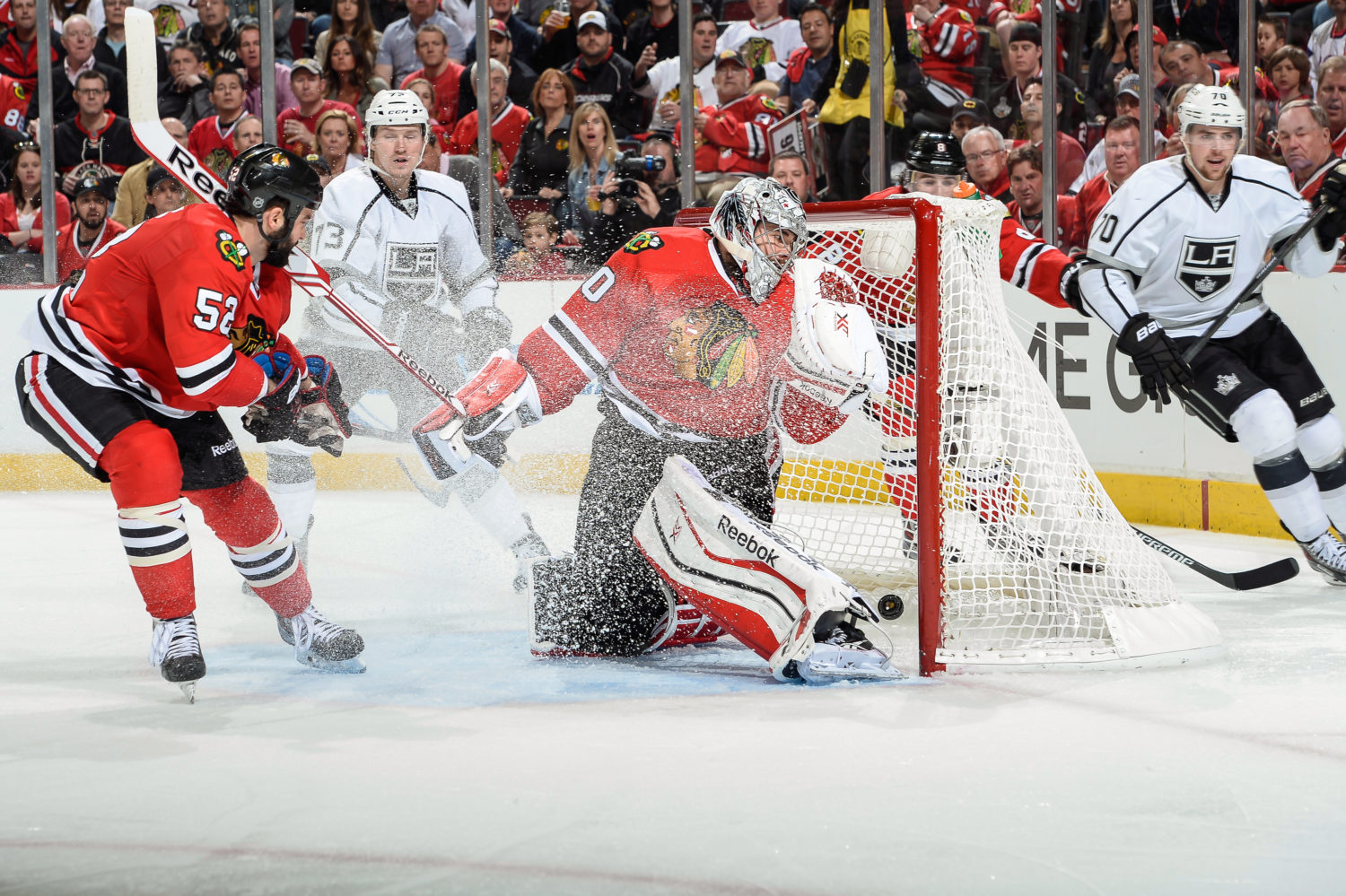 Tanner Pearson, on his first game against his ex-teammates:
Yeah, it’s definitely really weird. I saw the guys before the game and they had an optional skate, I think, so I ran into them walking out of the rink. They were playing soccer. So, I talked to a few of them there and then, like, it’s definitely weird to see those guys on the ice on the other side of that. You play with them so long and have so many memories and the fact that you know what they can do on the ice, you kind of maybe pay special attention to that too.

Pearson, on the Kings nearing additional changes:
I don’t know – obviously it’s different being on the other side now, but when I was there, there was a lot of stuff going around and in this day and age with social media, it’s hard not to look at it. But it’s part of the business, like you said, and some guys don’t really have much say, and I lucked out coming here. But no, it could be weird next time playing them – it could be a different team, but I don’t know. Who knows?

Trades of Kings whose names appear on the Stanley Cup:

February 26, 2013: Acquired a fourth-round choice in the 2013 NHL Draft (Justin Auger) from Philadelphia for Simon Gagne

April 2, 2013: Acquired a fifth-round choice in the 2013 NHL Draft (Patrik Bartosak) from Montreal for Davis Drewiske

June 23, 2013: Acquired Matt Frattin, Ben Scrivens and a second-round choice in the 2015 NHL Draft (later traded to Columbus on March 5, 2014, as part of the Marian Gaborik trade) from Toronto for Jonathan Bernier

June 26, 2015: Acquired Milan Lucic from Boston for Martin Jones, Colin Miller and a first-round choice in the 2015 NHL Draft

March 1, 2017: Acquired a fourth-round choice in the 2018 NHL Draft from Montreal for Dwight King

Great chat with Tanner Pearson, who practiced at TSC with Pittsburgh on Thursday. He’ll be a popular figure when the Penguins visit the Kings Saturday night at @staplescenterla.