INSIDERS. Let’s get down to brass tacks. The LA Kings took the Toyota Sports Center ice shortly before 10:00 a.m. and showed the change foretold yesterday: Matt Luff is in, Austin Wagner out. On Star Wars Night. Sigh. (Click here for more on Wagner and his Star Wars fandom, courtesy Zach Dooley.)

–The vitals: Jonathan Quick left the ice first at the morning skate and is expected to start in goal. He’s 3-4-4 in his career against Pittsburgh with a 2.63 goals-against average and a .907 save percentage. Austin Wagner remained on late for extra work with Paul LaDue, Sean Walker and Jonny Brodzinski, the latter of whom joined the skate late in a red no-contact jersey.

From upstairs, it was apparent to several of us that there didn’t seem to be a great deal of life in today’s morning skate. I get it: the team is about to reach the dog days in a forgettable season recently punctuated by a disappointing loss to another scuffling team. These guys are human beings. But because Willie Desjardins said that he was “a little bit worried going into San Jose” due to a perceived lack of energy, and indicated a dip in the energy in the second period against Ottawa,” this seemed to be an appropriate time to see if he had sensed another dip Saturday morning.

“No, the energy’s not bad. I think today it’s good,” Desjardins said. “The guys yesterday might’ve been a little bit down. It was a tough loss. You come back to the rink right away, I think it’s down, but I think today, it should be up. It was decent today.”

Often body language and early morning focus – or even focus in warm-ups – isn’t really indicative of anything. The Kings still put forth a strong effort against the Sharks in a heavier, emotional game, even after Desjardins’ pre-game observations.

–Their vitals: Because Matt Murray got onto the ice during an optional skate at Toyota Sports Center this morning, it’s likely that six-foot, 181-pound Casey DeSmith will start in goal. He allowed one goal on 29 shots while making his first career NHL start at Staples Center in a 3-1 Pittsburgh win on January 18, 2018. Tanner Pearson, who has four goals in five games and eight in 28 overall with Pittsburgh – he scored twice in the Penguins’ 7-4 comeback win at Anaheim last night – was bumped up to skate on Evgeni Malkin’s line opposite Dominik Simon last night. Should Pittsburgh continue to utilize what they showed, the other groupings include Sidney Crosby centering Jake Guentzel and Bryan Rust, Derick Brassard centering Riley Sheahan and Phil Kessel and Matt Cullen centering Derek Grant and Garrett Wilson. Defensive pairings in last night’s game included Dumoulin-Letang, Maatta-Oleksiak and Pettersson-Johnson. Jack Johnson, who has one goal and 10 points in 44 games, has two goals and eight points in 15 career games against Los Angeles. Tonight will be his 833rd NHL game. “They’ve got some real high-end players. Crosby and Malkin, to tag those guys, they’re high-end guys, and they have some young guys too that are good players,” Desjardins said. “Just overall, they give you trouble because it’s not just one line, it’s a couple lines that can come at you.” Justin Schultz (IR / left leg fracture) and Zach Aston-Reese (upper-body) both took the ice during an optional morning skate at Toyota Sports Center today, per Dan Greenspan, though regicide enthusiast Patric Hornqvist (concussion) did not.

–Pittsburgh traditionally features one of the league’s top power plays, and their current units check in with the sixth best rate in the league at 25.8%. (On the road, they’re 20-for-58 and rank first at 34.5%.)

Los Angeles, meanwhile, is good at avoiding penalties, ranking fifth in the league with an average of 7.4 minutes per game. On Thursday, they were whistled for two minor penalties, one of which shouldn’t have been assessed on Drew Doughty as he even-handedly battled Brady Tkachuk in front of Jonathan Quick during the first period.

How do coaches and players work to remove infractions from their games?

“One, I think you just stay focused on the next shift,” Desjardins said. “What’s happened happened. I think if you leave the referees alone, they really just call the game and if we stay off ‘em, you have a better chance of being successful. But other than that, if you’re in the right position then you’re not reaching, so if you get back into your right structure, then I don’t think you’re reaching as much, which helps you not take penalties.”

More than the individual penalty differential, Los Angeles simply needs to draw more penalties. Apart from Vegas, their 1,375 penalties drawn since the start of the 2014-15 season is the fifth-lowest in the league, a revealing number considering the team ranks second in the league in pure Corsi-for possession rates over that span. This year, their 148 penalties drawn is tied for the third-lowest haul in the league. (Penalty stats via Corsica.Hockey) 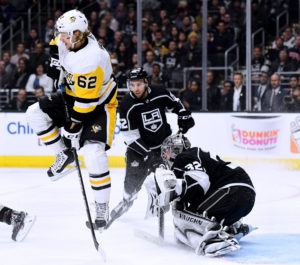 –Carl Hagelin missed the December game against Pittsburgh with an MCL sprain, thus depriving him of the opportunity to return to PPG Paints Arena and face the team with whom he won the 2016 and 2017 Stanley Cups.

“I think at the time, it was right around that time when I’d been hurt long enough, so you don’t care as much at that time because you’re kind of over it,” he said. “But, yeah, [playing in Pittsburgh] would’ve been fun.”

In trading one dressing room littered with Stanley Cup winners for another, he noted the tendencies and habits of the teams’ cores setting examples for younger players to follow.

“You can see that they’re confident guys, they know what it takes to win. I think both teams are like that. Obviously there’s a lot of history within the walls. You see a lot of pictures of guys holding the Cup or winning big trophies. I think those two things are very similar.”

Hagelin is eligible to become an unrestricted free agent on July 1, and as a player acquired for an asset with additional term in Tanner Pearson, there’s the possibility that the Kings move Hagelin in advance of the February 25 trade deadline. That doesn’t seem to be at all on Hagelin’s mind, though – he’s more concerned with continuing to build his game and help provide a skill the team is looking to accentuate.

“I felt good right when I got traded here,” Hagelin said. “I had good confidence, and then I played five games and you got hurt right away, and then you miss six weeks and you come back and played two games now. I definitely think I’m trying to use my speed to bring a little bit more speed as a team … we’re just trying to get some wins here. We’ve been struggling as of late, and it’s a good task for us tonight.”

–The second game after returning from injury is the much tougher game, players who’ve rehabbed injuries will often say. “I would wholeheartedly agree with that,” said Alec Martinez, who noted the adrenaline just isn’t naturally on the same level as the first game back.

“You’re always focused, but just trying to bear down on plays [helps in the second game back], especially early. Try to make the plays early. You can do different things to get yourself into the game – give a hit, take a hit, things like that. We’ve all been through it before. It’s a part of the game,” he said.

Martinez showed well in his first game after returning from an upper-body injury, logging three shots on goal, four blocks and a minus-one rating over 20:34 of ice time.

“You’d be lying if you said you didn’t feel a little off or a little different, but I felt better as the game went on, too,” he said. “I’ve said it before: it’s just the little things that are the last to come back. I felt pretty good.”

Martinez’s 19:19 of five-on-five ice time was the second widest haul on the team, trailing only Drew Doughty. The team’s 23 five-on-five shot attempts while Martinez was on the ice tied Jake Muzzin for the best individual-game Corsi-for on the team.

–I’ll have a lot more from Tanner Pearson later this afternoon, but the former Kings winger linked up with his teammates after arriving on Wednesday and should draw a heavy ovation when he’s recognized on the video board during the first media timeout. “I haven’t thought about it too much. I think it’s one of those things, you just go with the flow and, you know, whatever happens happens. It’ll definitely be weird, though.” Lots more to come. 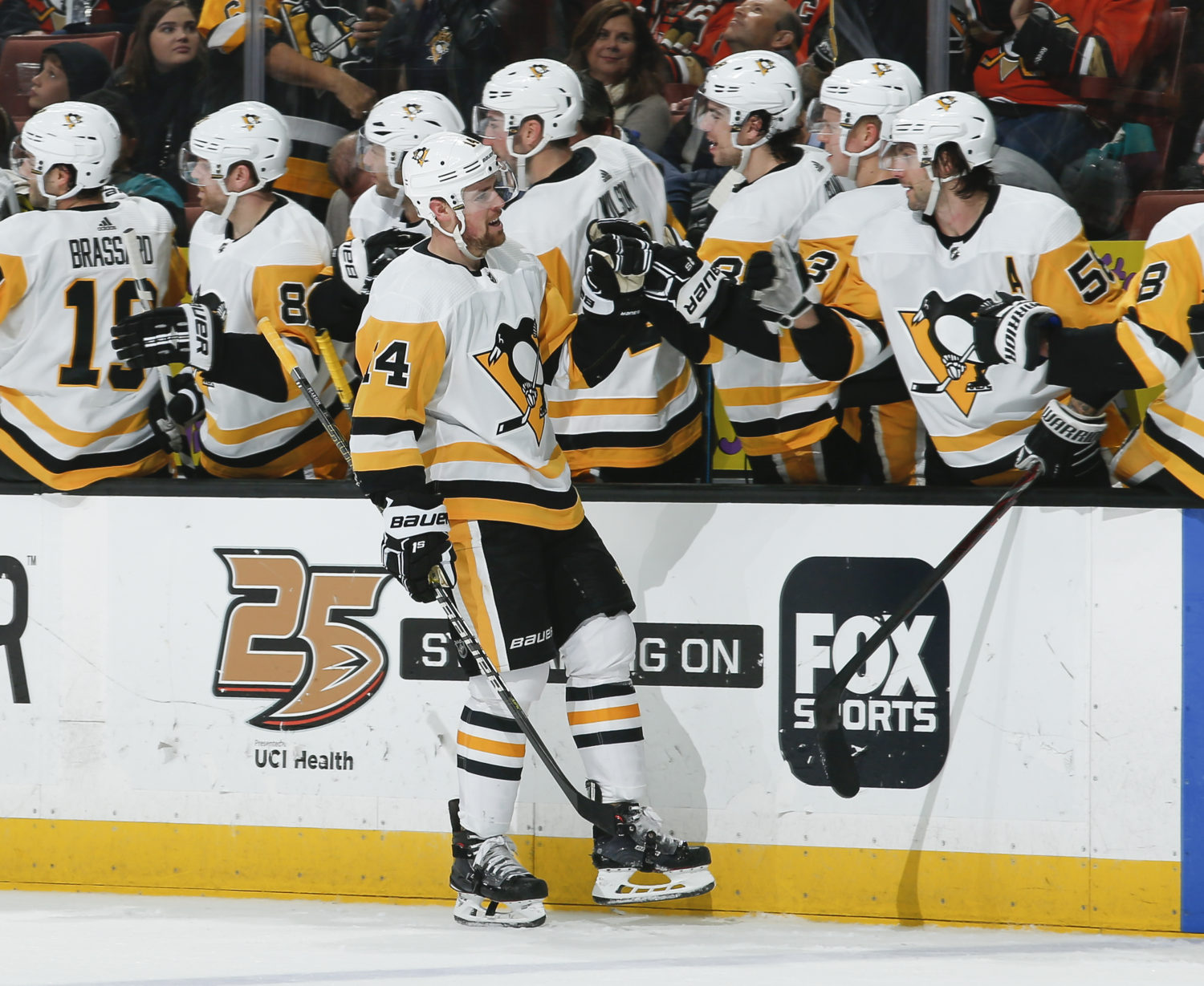