The Ontario Reign concluded their two-game trip to Texas with a 5-1 defeat at the hands of the Texas Stars, splitting the season series against their 2018 playoff foe.

The Reign, who played and traveled last night while their opponents sat idle at home, got a third-period goal from forward Brett Sutter, coming off of an assist from forward Sheldon Rempal, but it came with the score already at 5-0 against. The final shot count read 36-22 in favor of Texas, with goaltender Peter Budaj making 31 saves in defeat.

Similar to last evening, Ontario had a lot of energy in the opening period, but unlike Friday’s game, the Reign found themselves in a scoreless tie, after a period that saw Budaj turn aside all 12 of the shots he faced.

The Stars got on the board 3:50 into the middle stanza. Forward Colin Markison forced a turnover in his own end, won the race to the puck through the neutral zone and beat Budaj on the blocker side on a breakaway for the game’s first goal.

Texas tallied twice more in a span of 2:08 late in the second period to take a 3-0 advantage into the break. First, 15:51 into the second, Colton Hargrove redirected a Gavin Bayreuther shot, that Budaj got a piece of, but the rebound trickled through his five hole and Hargrove poked it home for his seventh goal of the season. Just over two minutes later, Texas struck again as forward Justin Dowling attempted a centering pass that deflected off the skate of Reign blueliner Daniel Brickley and in for Dowling’s ninth tally of the season.

The hosts would add two more goals in the third period, starting with James Phelan’s third goal of the season 2:19 into the final stanza, as he jammed home a rebound after previously hitting the left post. Texas made it a five-goal game before the halfway mark of the third as defenseman Joel Hanley wired a shot from the right-hand circle past a screened Budaj, his second goal of the season.

Ontario pulled a goal back 20 seconds after Hanley’s tally through Sutter, who collected his seventh goal of the season. After Rempal threw a puck towards the front of the net, Texas goaltender Landon Bow kicked the puck out with the right pad into the slot, where Sutter slotted it home.

The Reign return home tomorrow morning and will be off on the travel day. The team is next in action for Monday’s 7 PM, New Year’s Eve game against Bakersfield at Citizens Business Bank Arena.

Mike Stothers on whether tonight’s result was due to a lack of effort or execution
There was nothing wrong with the effort, we just didn’t have the juice to compete with a team that was resting at home last night. We came off a four-day break, traveled to the State of Texas and played back to back games, the second of which is against one of the best skating teams in the league. I never question the effort of this group, but it is hard to make your body respond when the energy is depleted. You can drive a brand-new car off the lot and when it runs out of gas are you going to take it back to the dealer? Trade it in because you felt it was lacking effort? The hell you would. Everything performs better on a full tank of fuel.

On creating scoring chances when the team is tired on a back-to-back set
In order to do that, you actually have to possess the puck. Let the puck do the work. Advance instead of turnovers, which lead to retreat. Retreat means you are chasing and playing in your end. A big part of scoring chances come from your forecheck and making teams have to come through you, 200 feet.

On making adjustments with a quick turnaround on Monday, with a travel day in between
First and foremost, we hope for a smooth and on-time travel day. Get some much needed rest, look at some video and prepare like always. It doesn’t matter how many times you get knocked down, we just get back up to fight another battle. Can’t wait until Monday.

Sam Herr on creating energy and chances in first periods this weekend, but falling off from there
Yeah, it was definitely the case last night too. There’s no excuses. We have a game plan coming into the game and we come out in the first period and we execute it. Regardless of the score after the first, last night it was a lead, tonight it wasn’t, but we’re still in it and then we get away from it. It’s simple things like not getting the puck deep, like not finishing a check when you should be. In order to fix it, we’ve just got to do it. We’re talking about it, so just do it.

On whether tonight’s result was due to a lack of effort or a lack of execution
Guys want to do it. Obviously we have some hiccups and obviously we have some mental mistakes, we’re seeing that, it’s pretty obvious. I don’t think it’s an effort thing. Guys want to go in and win the game. Tonight, we wanted to do the right things but I don’t think we had the jump that we needed down the stretch. Everyone can be better but I think going into games, guys are trying to do the right things, I think it’s more of an execution thing right now.

On no longer accepting “being a young team” as an excuse
There’s pros and cons of having a young team and one of the major pros is to have the energy. No one in the locker room is letting that land on the young guys – It starts with the older guys, it starts with myself and we need to set the tone that we’re going to come ready to play every single game. As hard as we worked and as well as we played in the first periods this weekend, like you said, it goes away in the second and third and that’s not good enough. Me as a leader, other guys that have been around awhile, even second-year guys that are getting this experience. Guys like Royzie, they’re getting a ton of ice time and they know what to do. It’s just a matter of all of us just buying in and going out and giving everything we have.

On what he and the other leaders are saying in the room to turn things around
One of the big things right now is just trying to stay positive. The message today was just to keep going, no matter what it is just keep going. Whether it was a mental mistake, just shake it off and keep going. It starts with the three [captains], executing our game plan and that’s why we’re leaders. Guys like Dermy, Royzie too, all of us just need to buy in and lead the way with how we want to dictate the game and it’s going to go. We’re getting away from that and we need to do a little bit of soul searching and get back to that. 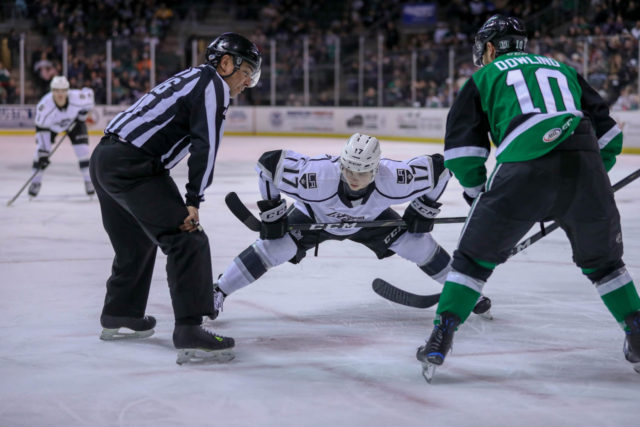 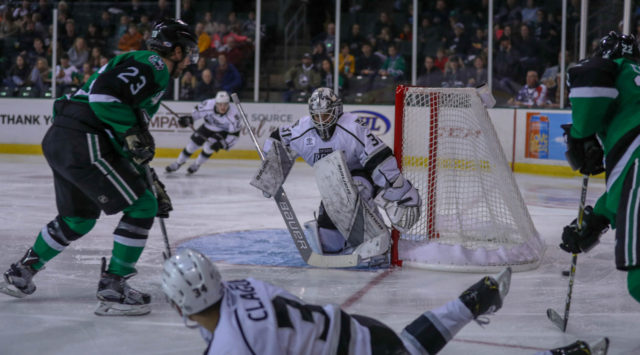 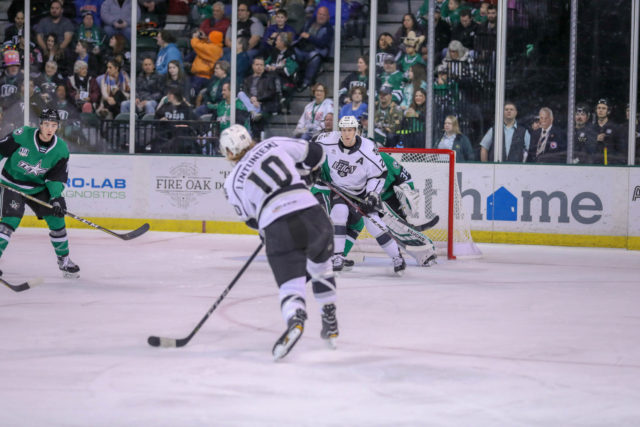