When Justin Williams returns to his former hockey circles in Los Angeles, there are still the familiar reminders of success, appreciation and friendship. He ate dinner with an ex-teammate he won two cups with, was interviewed on television one night later by another, and the following morning, before practicing at Toyota Sports Center, met a Kings figure for breakfast and stumbled upon a movie set around the corner from the Hermosa Beach Strand. “Definitely a very LA moment,” he said. “Beautiful day out, sun was out, palm trees, and they were filming something from Warner Brothers.”

This sounds like a terrific weekend getaway, but Williams was in town to win a hockey game as captain of the Carolina Hurricanes, and even after four Staples Center returns is yet to leave his former rink with a win. He lost once in overtime and once in regulation with both Carolina and Washington, and for one of the NHL’s most legendary performers when the games mean the most – and someone who once compared playing a former team to bumping into an ex-girlfriend – that’s something that doesn’t sit well. “They’re all tight games,” he said. “There’s always a little something special when you play your former team. There’s obviously no hard feelings there, but it’s human nature, I guess.”

“It’s always going to be special, right? This is, barring anything else that happens in my career, perhaps the pinnacle of my hockey career here, and the success of my hockey career was here. I made a bunch of friends and people that you’re going to remember forever and you’re going to cherish forever, and that’ll never go away. This area will always remind me of it, so it’s always nice to come back because people that you care about are here that you come see, and you just kind of pick up just like that. I went to dinner with Kopi – I hadn’t seen him in months, but things just pick up again, so it’s certainly special in that aspect.”

While the FOX Sports West interview with Jarret Stoll served as a special moment between a pair of veteran members of past teams’ leadership committees, the regulation-time welcome was predictably less neighborly. Drew Doughty laid his ex-teammate into the boards with a hard shoulder during the third period of a game Los Angeles won 2-0 on late Alec Martinez and Kyle Clifford goals, and after the immediacy of a heavy hockey play expired, there were a few smiles back and forth.

“Me and Justin always had a thing where we’d always banter back and forth as to who would win in a fight if we ever did drop the mitts,” Doughty said. “That was kind of something that’s been going on for years and years, and obviously I thought I’d win the fight, and he thought he’d win the fight. I just saw the opportunity. He was kind of ducking, so it made it look a little better. It felt kind of good to get him.”

Williams has laid his own hits on Doughty. He will do so again, as will Doughty. “There’s nothing wrong with a good hockey hit, and that was a fun hockey hit,” Williams said. “Nobody’s hurt, and you line up again and do it again. Obviously, Drew is another friend of mine and a guy you respect because he plays hard regardless of who he’s up against.”

Perhaps the reaction after the hit was uncharacteristic.

“I guess I let my guard down a little bit with a smile. That’s probably all he’s going to get out of me.”

The Kings won the game that night, the 10th of their 12 victories this season. Across the league, the Hurricanes are in their familiar place amidst the Eastern Conference peloton, vying to strengthen their position in the battle for either a top-three Metropolitan Division landing or a wild card berth. It’s not only Carolina’s tightly structured systems play and possession-heavy habits that have been technically sound, but also their post-game win celebrations at PNC Arena, which Williams has helped used to organically impart additional personality and fun into a co-operative post-game curtain call. “That’s obviously one little part of it. We’re looking to enjoy the good games, and enjoy them certainly with the people who came to watch us play.”

“Leadership” is multi-dimensional and nebulous and subject to interpretation, and certainly defined more by the actions that happen in the lead-up to a hockey game and during it than in its reaction. Williams’ own DNA as the 16th captain in Whalers and Hurricanes history has been built through the formative experience gained as a a barely-19-year-old rookie, a three-time Cup winner and a veteran of 1,194 games, as well as the support and influence around him.

“You take little pieces of every leader that you liked in your career – and I’ve played with a lot of great leaders – and you take little pieces of their personality, or little sayings that they had, and you make them your own. We have a lot of young guys on this team, and young guys need to learn how to be professionals, not just hockey players. Myself and our leadership group here is doing our best to instill that and make sure that everybody is accountable, everybody works their butt off while they’re here, because it’s a privilege to play here and it’s a privilege to put on a jersey.”

Justin Williams, on whether it was special to be interviewed by Jarret Stoll:
It’s different, right? It kind of just solidifies the evolution of a hockey player. You play together, and then sometimes your friends become coaches or scouts, or work TV. It’s just how it goes. It was fun, definitely fun, and obviously a little different, but certainly very easy to talk to, because he’s a friend.

Williams, on the leadership within the Los Angeles room during his tenure as a King:
We all kind of did it by committee because we all kind of close in age. There wasn’t one guy, like an older guy that you looked, you were like, ‘man I could just follow him, he does it right.’ Obviously Sean O’Donnell was an older guy who was very professional, but that team, I think if you look back at the amount of leadership that was on that team, that’s really tough to come by, and the attitudes and I guess the will to win with those teams and those guys and those personalities obviously resonated and showed with the couple victories.

Drew Doughty, on whether he still talks to Williams on the ice having played seven times since 2015:
Back in the day when we’d play him, I would try to joke around with him, and he was in serious mode or whatever, which he kind of needs. He’s their captain and stuff like that, so he kind of needs to be that way. I still miss having him here. He was a big part to our team and a good leader and a good guy in the room and a good guy off the ice, so we definitely miss him in here. It’s still a little weird playing against him, but when you get out there, you just put all the history aside and go play. 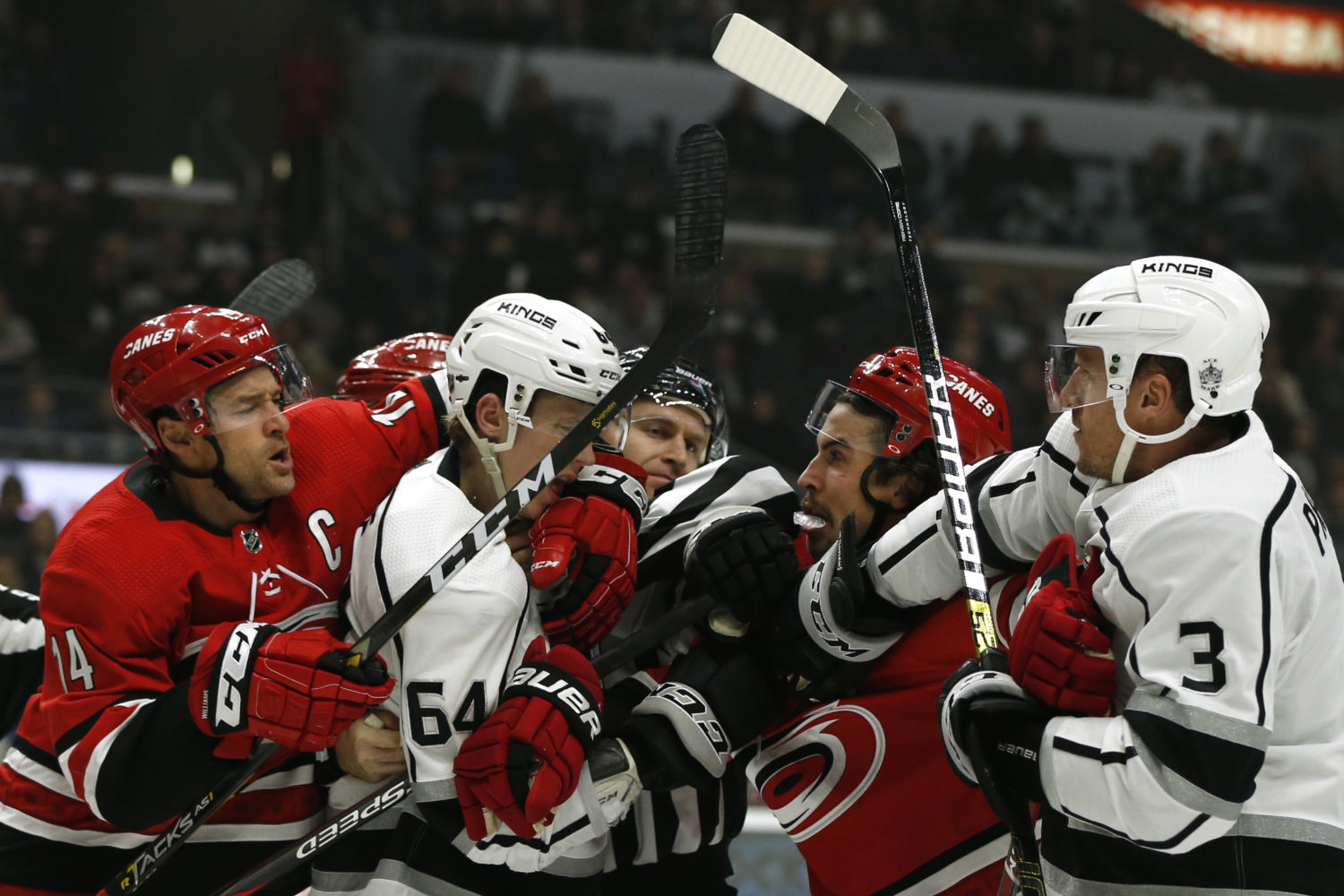