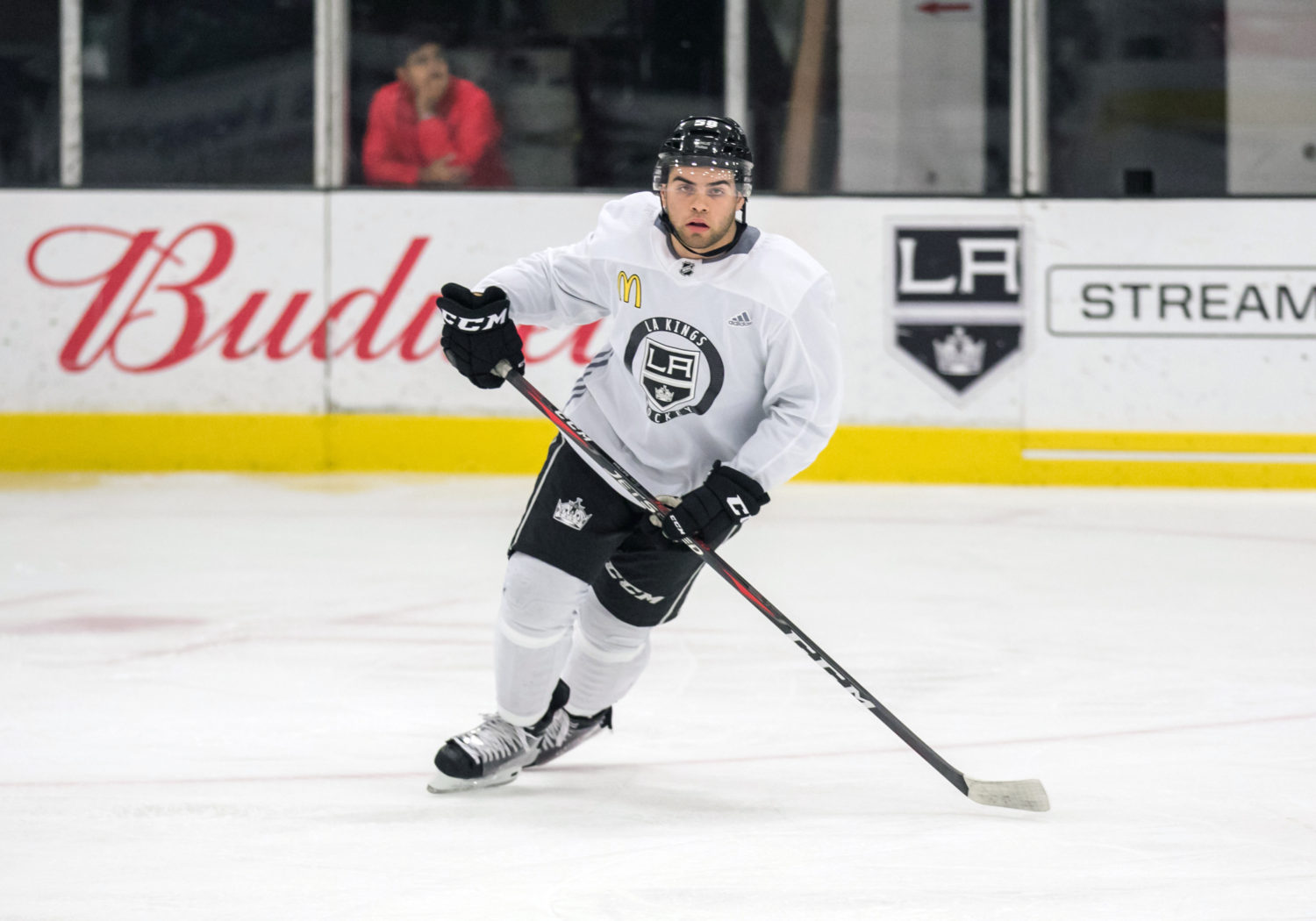 INSIDERS. Thanks for all of the amazingly kind and warm wishes over the past week. Baby, mom and sister are all doing well. Thank you as well for the compliments you shared with Zach, who did a great job as LA Kings Insider, and Jessi, likewise as Ontario Reign Insider. Before we get to the notes of substance, sadly, Zach’s excellence did not transfer over into the Official LAKI Standings, presented by Munters:

While it could be Dooley Noted that Zach didn’t exactly have the horses like, say, 2013-14 James Nicholson, let’s not forget that Jessi was able to pick up a big win against the Blue Jackets earlier this year, while Zach, like a particular football team I could think of, wasn’t able to leave Columbus with a win.

PRACTICE AND INJURY NOTES: The Kings skated at Toyota Sports Center at 10:00 a.m. after a day off Sunday. Ilya Kovalchuk (bursectomy) got on the ice before most of his teammates but left relatively early and isn’t presumed to be particularly close at the moment. He and Kyle Clifford (concussion-like symptoms) skated in red no-contact jerseys, as reported by Curtis Zupke.

Jack Campbell also got on the ice for the first time with the team and is projected for a post-Christmas return, per Willie Desjardins, though the Alec Martinez news was not immediately clear:

They'll know more about Martinez in 4-5 days, WD said. Campbell is a post Xmas return. Clifford has to pass some more tests.

Clifford rode the bike earlier in the week and had been positive about clearing tests and returning to action expeditiously, but those types of injuries are nebulous and murky, and for a player who has a history of them, it’s a promising sign for his personal health that he has progressed to the point where he has passed the bike and workout tests without incident.

WJC UPDATES: You’re aware of most of this by now, but a few notes as camps are well underway: No world juniors for Canadian goalie Matt Villalta. This isn’t a surprise, and while his skate laceration was brutally unfortunate, Michael DiPietro (VAN / 3rd 2017 / 2.26 / .922) and Ian Scott (TOR / 4th 2017 / 1.61 / .943) played their way onto the team despite some late Dusty Imoo work with Villalta in the week before he reported to camp.

On the other hand, Markus Phillips earned a spot on the blue line, an impressive rise for a player who was a late addition to Canada’s summer showcase camp when Josh Brook was lost to injury and has admirably defined himself as a player. Phillips was refreshing social media constantly when he learned that he had made the team. “Bob McKenzie told me via Twitter,” he said, via TSN video. That’s a good link to click on and also contains a really interesting conversation with coach Tim Hunter, who shared how his evaluation of Phillips was in complete lock step with the player’s – that as a “defend-first defender” and a puck-mover with a good first pass, as the 19-year-old put it. Phillips, selected in the fourth round in 2017, has seen a dip in his scoring this season for a good Owen Sound team but has “rounded out his game very well this year,” as shared by an Ontario-based L.A. scout. “Focused on playing defense. His use of skating is much better. More physical and harder to play against. Accepted defensive responsibility and plays big minutes against top players. He had a solid showing in the Canada Russia series as well.” That economical use of skating was also referenced by Phillips in the linked video above and credited to the team’s development staff.

Also, the big guns: Gabe Vilardi and Jaret Anderson-Dolan will play for Canada if healthy and may get into pre-tournament games this week. There had been encouraging news on Vilardi since he had missed the final game in his conditioning assignment, but recent check-ins on Anderson-Dolan weren’t promising at all. As of a month ago, it practically seemed as if his exclusion from the team was inevitable after early November wrist surgery necessitated by an injury suffered in his second game back with WHL-Spokane. But as of yesterday he was skating opposite Vilardi on a line centered by Montreal prospect Nick Suzuki, and though Vilardi didn’t take the ice on Monday – Mark Masters of TSN shared that Hunter revealed that he was receiving off-site treatment – Anderson-Dolan skated with Suzuki and uber-prospect Alexis Lafrenière, the 2001-born player who would be the likely casualty should Vilardi and Anderson-Dolan be healthy. “Both guys wanted to take part and they wanted to get out and be part of all this and be on a line and be part of the group,” Hunter said Sunday, as reported by Masters. “That’s a great sign for them both mentally and physically.”

Meanwhile, Johan Sodergran remains at Sweden’s camp, Rasmus Kupari will feature in a top role with Finland as he looks to build off his five games at last year’s tournament, and Mikey Anderson, who will log heavy minutes for the United States, was paired with Rangers first rounder K’Andre Miller during a Team USA inter-squad scrimmage Monday night in Everett, Wash. The tournament will take place between December 26 and January 5 in Vancouver and Victoria, B.C.

31 THOUGHTS: Luc Robitaille joined Jeff Marek and Elliotte Friedman on the 31 Thoughts podcast for a good hour. Especially in the second half of their conversation, Robitaille shared insight into the team’s business practices, which included an amazing Dean Lombardi anecdote that when the team was marketing itself early in Lombardi’s tenure, the GM insisted that any billboards or ad campaign include four players together, and never any individuals; all hockey and marketing thrusts had to match hockey’s vision. While this isn’t a conversation that dives into the team’s on-ice struggles – Robitaille did note that the belief was that the core players would “hold the fort” this season, and that hasn’t worked – there are some interesting Kings/Red Wings organizational comparisons involving protein shakes from 15 years ago, as well as the time Marlee Matlin showed up in the dressing room during the early Gretzky years. The second half of the podcast is what you’re probably most interested in – Robitaille and the organization’s business principals.

AN EARLY LOOK AT THE 2037 DRAFT CLASS: Big, big stick taps to Hoover, Joel Goodling, Patrick O’Neal and Greg Longstaff for putting together this silly feature – err, very timely and important Rosen Report. This meant a lot to our family and FINALLY justified my theatre degree:

Looking ahead to the 2037 Draft, @lakingsinsider gives a Grade A scouting report of the newest member of the Rosen family 😂