In their third meeting of the season, the Ontario Reign fell to the Colorado Eagles in their closest contest yet, a 4-3 overtime loss.

Ontario opened the first period by taking an early lead after Matt Moulson was able to push the puck through Pavel Francouz’s legs at just over one minute into the match. The goal, assisted by Klague and Maillet, marked Moulson’s seventh of the season. Tossing of teddies ensued as fans took part in the club’s annual Teddy Bear Toss, which, this year, benefits Toys4Tots. Despite players from both teams helping the ice crew gather the stuffed animals, bears rained down for almost 14 minutes before the ice was cleared and play could resume.

The Eagles’ Andrew Agozzino earned a total of three points, netting Colorado’s first goal of the game and putting away the equalizer in the third period to force the game into overtime. Agozzino (12-16-28) entered tonight’s game ranked 15th in the league in goal-scoring and assisted on Colorado’s overtime game-winner by Logan O’Connor at 23 seconds into the extra period.

Mikey Eyssimont had one of his better games of the season, skating hard while getting to the front of the net, and ultimately notched a goal after stealing the puck on the forecheck while his linemates were on the change. Eyssimont didn’t score on his original shot from the left circle, but collected his own rebound to circle behind the net and throw the puck around the right post where it toed the goal line and hit the opposite post, before getting knocked in by an Eagles defenseman. Eyssimont’s goal led to a 3-2 lead in the third period and was his first goal since scoring against the Eagles on October 19th while at Colorado.

While Ontario wavered between playing with the lead and playing for the lead, one constant throughout the game was the level of chippiness, with Travis Barron’s huge hit on Austin Strand in the first period acting as an catalyst for the scraps that continuously occurred after whistles. The Reign’s MacDermid, Eyssimont, Bauman, and Maillet all spent time in the penalty box for an Ontario total of 22 penalty minutes Colorado’s 17. Austin Strand finished the game having registered three shots in his second game at the AHL level.

Mike Stothers, on Sheldon Rempal participating in warmups, but not playing:
Yeah, he’s a little under the weather. We thought he was going to be able to fight through it, but stomach virus type of thing, so hopefully he’ll be okay tomorrow. Hopefully nobody else gets it.

Stothers, on his impression of the game:
I really liked the way we played actually. I was disappointed that we didn’t get the second point. I thought our guys worked hard enough against a really good team. And I mean we were missing a few guys obviously, maybe the depth isn’t quite there. You know, you got some guys there that aren’t as experienced as the players on the other side of you, but I thought we played really well. I thought we had a terrific third period and you know what, I guess if there’s some consolation, we got a point.

Stothers, on whether Eyssimont’s line pairing was a reward for anything or more about balancing lines:
Kind of a combination of both. Mikey hadn’t scored I don’t think since we were in Colorado, so we kind of thought this is his team, and then he did score so that was good. But he’s struggled like some of the younger guys. He’s had some good stretches and some stretches where he’s wanting to produce more. But you know what, I think tonight was a good example of what he can bring to our hockey club. Now, you know what, we’re going to pump his tires and make sure he knows that that’s exactly how he has to play. And I think he felt good about his game too. I don’t know if you guys were talking to him, but so it’s a feel-good for him and hopefully you can carry it over and do it again tomorrow and then beyond obviously.

Stothers, on his impression of Austin Strand:
Well, he got in because of an opportunity presented and that’s a good thing. That’s what young players need to do and then you’ve got to take advantage of that opportunity and I thought he handled himself pretty well. I mean, obviously you can see he has some mobility and some puck skills. I guess the good thing was he wasn’t trying to over-do things. I think he played within himself and I thought it was a good- – I guess this is his second game, so — a good second game.

Stothers, on Reddekopp having some strong shifts:
Yeah, I really liked Redd. I thought he was heavy, he was physical, he was hard to play against, he was determined in our end and he’s a guy that just has to keep his game simple and I thought he did a really good job of it tonight. Actually, you know what, I thought everybody was good tonight. It was good on him. He’s good for us and he’s a good penalty killer too. Another big body with some reach and understands the game, works hard, got an element of toughness to him. We haven’t seen that yet, but we’ll keep poking the bear, see if we can get him mad.

Mikey Eyssimont, on not being able to maintain the lead despite scoring early in periods:
I mean they’re a good team, but I think we deserved to win that game, but a few bounces don’t go our way and they capitalize on theirs and we didn’t so even though we had some chances to bury them, especially early in some of those periods, we couldn’t capitalize.

Eyssimont, on what he saw on his goal:
Well first off, I was just trying to stall on the forecheck so that my linemates could get a change and I ended up getting a lucky bounce. I thought I saw something five-hole, it didn’t go in and I was able to kick it back to my stick for a wraparound. A little flukey, but I’m glad it went in.

Eyssimont, on whether they expected game to be so physical or if the chippiness was prompted by Travis Barron’s hit on Strand early in the game:
Yeah, I think that might have sparked some fire in both teams, but I think that the way that we play, every game, games can get chippy and I think that the more physical game I think that we can use that to our advantage, just the personnel that we have, but we’ll have to watch the film and look at some things and see what we can do better.

Eyssimont, on the takeaway from tonight’s game:
I think as a team we want to be better on the forecheck. Sometimes we get too many guys caught down low so just working back and through the middle on the backcheck and on the forechecks so you know we didn’t get a power play tonight so not much to look at there either.

Eyssimont, on the adjustments he finds has to make that he didn’t last year:
I think consistency. Just coming in a pro from college, I’m not on every power play, I’m not on every penalty kill so just doing the best with the chances that I get and every opportunity I get I have to be good and I have to be strong and I think that’s something I’m working on and getting better, but still long road ahead.

Eyssimont, on the challenges of developing chemistry when guys are in and out of the lineup:
I think, you know I’ve been put on a line with some of the younger guys that haven’t been called up, like Rymsha. I think we were able to build some chemistry and then when I get put up on lines with some of the older guys like Sutter and Moulson, that just comes pretty natural because of how smart of players they are and how easy they are to play with.

Eyssimont, on if he makes a mental adjustment to playing a different type of game when on a line with veteran players:
Yeah. I think every line is different, but as a team you all want to play the same way. So you know, whether you’re playing down on the fourth line or on the first or second line I think that we just want to play a hard, forechecking game so I try to have the same mindset no matter who I’m playing with.

Eyssimont, on if there is anyone he has been working with to develop his game:
Yeah, Craig Johnson, skating coach. I’ve been out on the ice with him every week working on things and watching video with him, you know among other development coaches I’ve been with, but CJ’s kind of taken me under his wing a little bit and realized that i’ve needed to work on some things and he’s kind of taken it upon himself to take me out on the ice early and work with me. 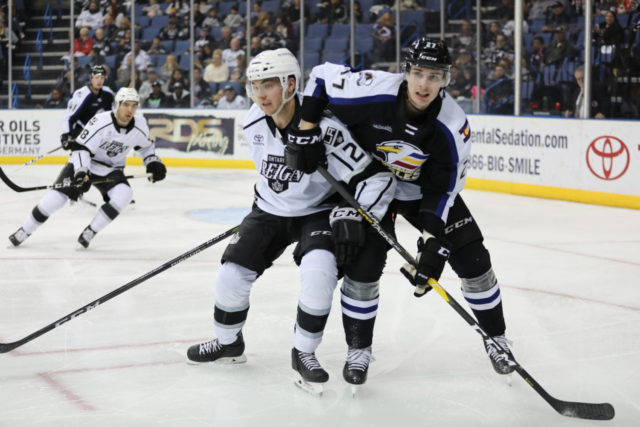 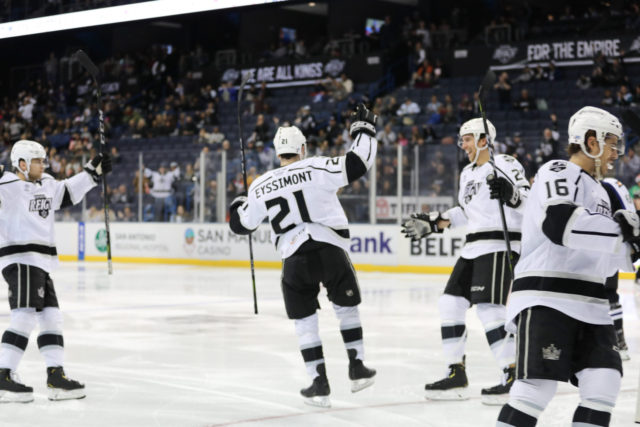 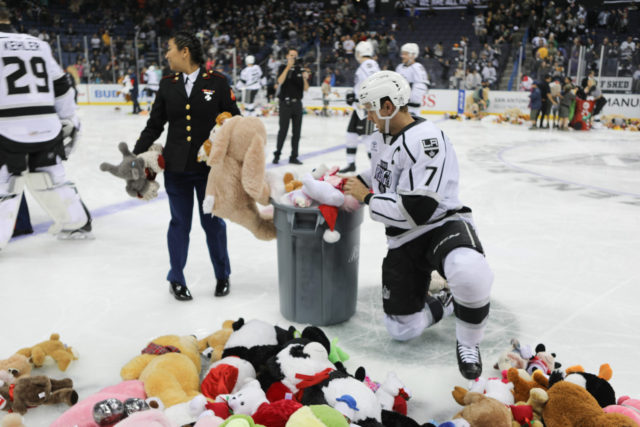 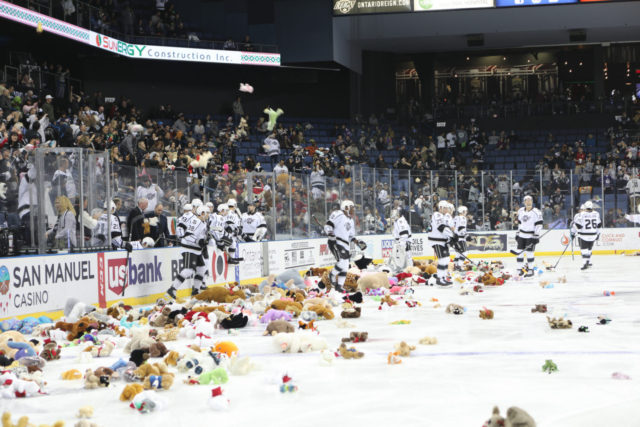