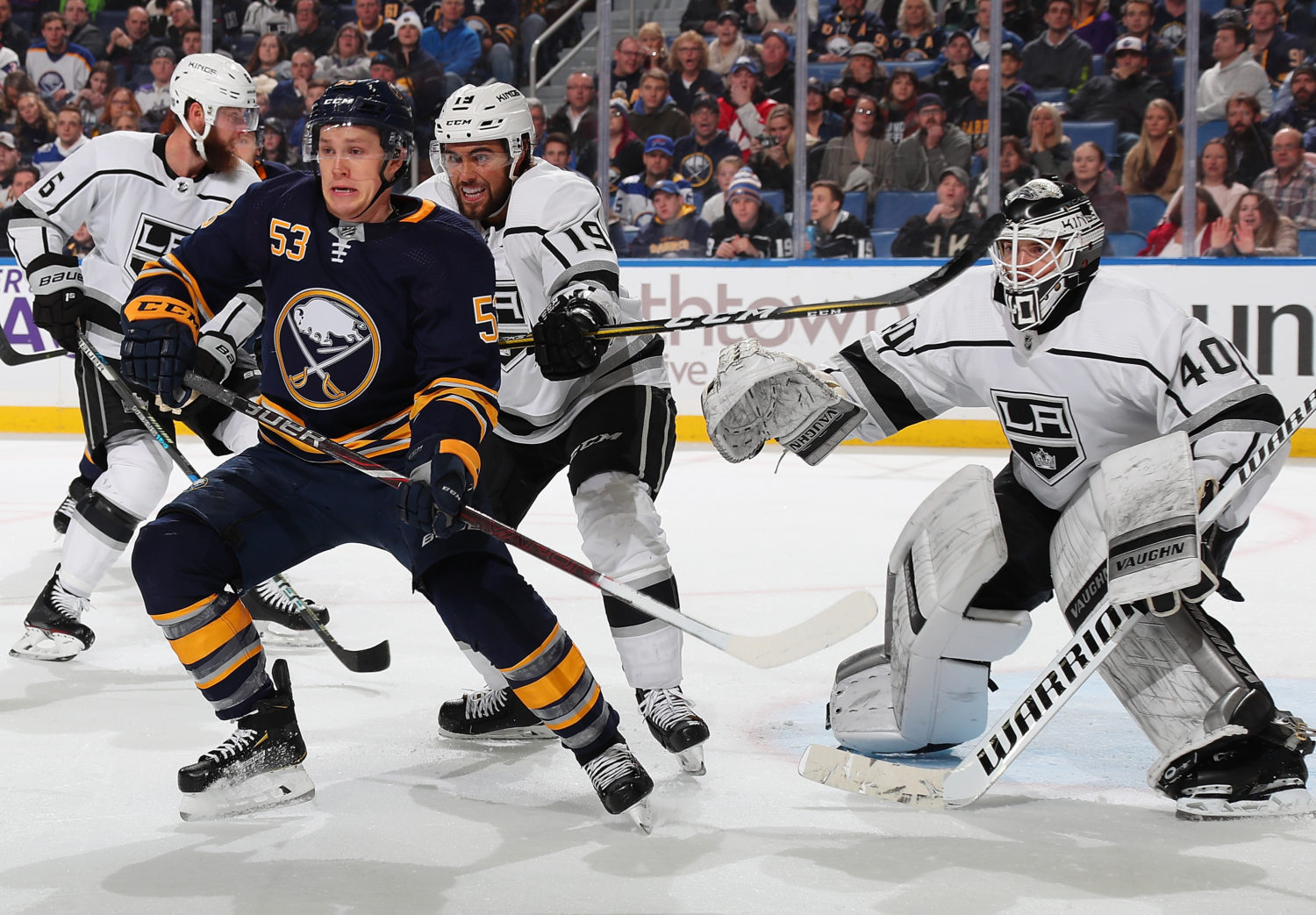 Willie Desjardins, on if he was impressed with the team’s effort:
We had a pretty good effort for a number of games lately. I think we didn’t have as good a first period, but I thought we had a great second period. The third period was a tough period, we knew that coming out — down a couple D-men — but guys played hard.

Desjardins, on sensing that Buffalo was gaining momentum early in the third:
They got the one and you know they’re going to start coming. Then the power play goal, but I thought even after they scored, tied it 3-3, I thought we came back. We settled it out a little bit. We had a couple shots at ‘em, but overall, it’s back-to-back, you’re playing with four D, you’ve got a young guy in, so it was a very good effort from our whole team and all the guys battled tonight.

Desjardins, on Muzzin’s performance:
He’s a great player. Every time he goes out he plays hard and he gives us both offense and defense. A lot of times guys see him as an offensive defenseman, but he can do it all and he’s a big guy and he loves to play, and he’s got such a good attitude around the locker room as well, so a big effort by him tonight.

Desjardins, on if he has any update on Drew:
That’ll be day-to-day I would think.

Muzzin, on the challenge of getting through the game without two veteran defensemen in Doughty and Phaneuf:
It was tough. It’s four D on the second leg of a back-to-back. It’s a tough haul. I thought the D battled hard, maybe a little tired in the third and took some penalties and they capitalized on one in overtime. Frustrating loss, man. 3-1 going into the third — we’ve got to start finding ways to win hockey games.

Muzzin, on Petersen’s performance:
He gave us a chance. I mean without him it could’ve been worse. He’s just so calm and collected back there and always in position. He has a calming influence on the back end. I feel like I do my job and he’s going to do his and make the save, and he did that a lot tonight.

Muzzin, on adapting to playing without Doughty and Phaneuf partway through the game:
Throws some young guys into positions that they’re not used to being in and it gives them a chance to show what they can do. I thought they did a pretty good job, just not good enough.

Muzzin, on his assist on Luff’s goal:
Just a high flip really to someone with speed. I know as a defensemen it’s a tough play — guys are coming at you with speed, a puck in the air, you don’t know if he’s going to hit you or grab the puck. It’s just a tough, tough play, so I kind of just threw a prayer in the air over there and Luff made a great play knocking it out of the air and going in and scoring, so it was a good play by him.

Cal Petersen, on whether the team can be happy with getting a point given the injuries that occurred to Doughty and Phaneuf:
I don’t think that’s the way we want to look at it. We obviously had a 3-1 lead going into the third and they were able to get a lot of momentum and unfortunately we lost it at the end, but I thought our D battled tremendously. Obviously being down two defensemen for almost half the game, so on that side of things it’s encouraging, but for only one point for the position that we were in, it’s unacceptable.

Petersen, on his first game against Buffalo since being drafted there:
For me, it was just our game. They were the first team to give me a taste of an NHL organization. Obviously very fortunate for that, and a lot of good people over there, but I kind of just approach it as another game.

Petersen, on the impact of losing an emotional leader like Doughty:
It’s a huge loss. Not only is he a big-time hitter, he’s also one of the best defensemen in the game and he eats a lot of minutes so, like I said, I thought that was picked up extremely well by the other five guys and then the four guys, but losing him is a huge part of our game.

Petersen, on Muzzin being “a rock” for the team in the defensive zone:
He was huge. Once Drew went down, he was kind of the leader back there and it seemed like every time the puck was in our zone, he was blocking shots, directing traffic, so he did a fantastic job as well as all the D.

–With the overtime loss, Los Angeles dropped to 46-58-21 all-time against Buffalo, a record that includes a road mark of 17-33-12. The Kings are now 5-3-3 in their last 11 games against Buffalo overall and have won just two of their last 11 contests in Western New York.

–Drew Doughty played his 360th consecutive game, extending his all-time franchise record for consecutive games played, but did not return to the game after suffering an upper-body injury late in the first period. See HERE for a full story regarding Doughty.

–Jake Muzzin played a regular-season career-high 30:35 in tonight’s game, surpassing his previous mark of 28:55, set on 12/22/14 vs. Calgary. Muzzin also scored his second goal of the season and tied a season-high with two points, the second time in three games he’s collected multiple points.

–Cal Petersen faced a career-high 47 shots and made a career-high 43 saves in the overtime defeat, surpassing his previous career highs (42 shots faced, 38 saves).

–Forward Adrian Kempe scored his sixth goal of the season in the second period. Kempe has now collected a point in four of his last six games.

The Kings are traveling to Columbus this evening after the game. There is no word yet on practice plans for tomorrow.