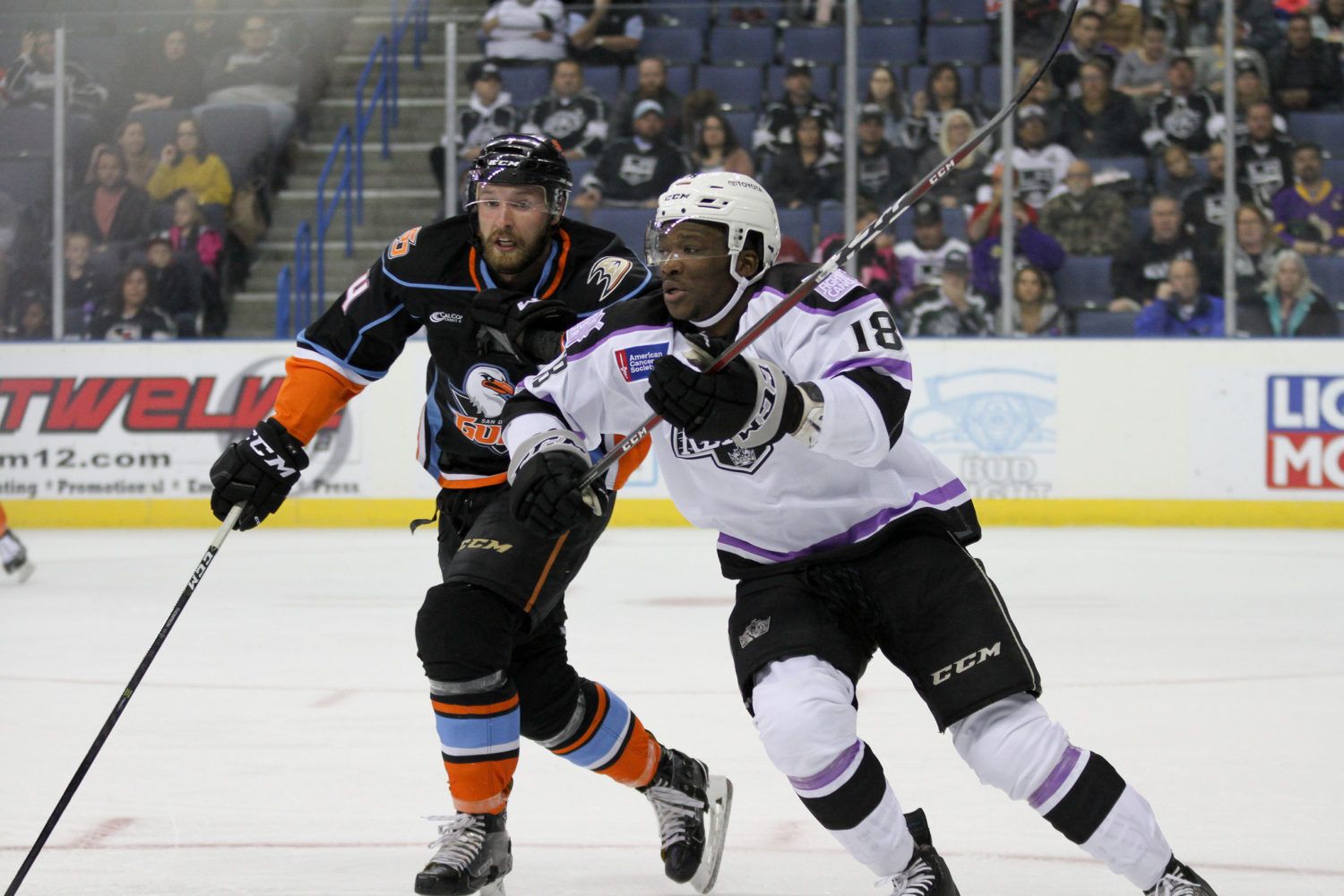 The Ontario Reign skated to their second straight victory as they outlasted the San Diego Gulls by a 4-2 final score on Saturday evening at Citizens Business Bank Arena. Ontario got goals from four different players as they won in back-to-back games for the first time this season.

After the Gulls took a 1-0 lead with the lone goal of the first period, a power-play tally from defenseman Josh Mahura, Ontario evened the score at one with a marker from Zack Mitchell, his third of the season.

With the score knotted at one, the newly re-assigned Austin Wagner gave Ontario its first lead of the game just past the halfway point of the first period with a wrist shot from the high slot that beat San Diego netminder Kevin Boyle for the 2-1 advantage. Just 19 seconds later, Sam Herr scored his first goal of the season to double the Reign’s advantage at 3-1.

The Gulls made things interesting down the stretch as forward Max Jones scored his first of the season for the Gulls on a nice move from the right side, before forward Brett Sutter extended his home scoring streak to six games with the empty-net goal inside a minute to play in the game.

Goaltender Cal Petersen turned in his second straight strong performance, as he stopped 29 of the 31 shots he faced in the victory, his second in as many games.

Austin Wagner on his first game back with the Reign
It was good, I adjusted pretty well I thought. I took a penalty there and didn’t need to take that and I messed up on the too many men – that’s the mistakes of hockey and I’ll learn from them and get better next game. I thought my line, all around, was great and the team was great. We played with a lot of energy tonight and we battled through the adversity that they put on us. We played really well.

On how the play developed on his goal
Honestly, I don’t really remember, it was like I was just playing out there and the goal just happened. I was fortunate enough to get a shot in the slot, Remps provided a great screen and our line, I thought we were creating a lot of offense all night. To get one there, and then at the end of the game to get the empty netter, it pays off for our line and gives us some confidence heading into the next game.

On what he learned from his time in the NHL with the Kings
There’s lots of things. I played in this league last year too, so I’m kind of in that middle stage right now, where last year I played in like [50] games and got my feet wet. This year, I was fortunate enough to be up there for a bit and I’m just trying to bring what I learned up there and bring it down here. Work ethic is the biggest thing. You see how hard those guys work up there every day and you try to bring that down here.

On the opportunity he has in Ontario to play in more situations and more minutes
You come down here and you play a lot more minutes, get some confidence back after you score a goal. I didn’t score a goal up there, I had chances but couldn’t finish and I think I was overthinking it a lot of times up there too. To get a goal tonight and to play well, I think it helped to get some confidence back in my head.

Mike Stothers on his team’s performance in winning two in a row
I thought we played a lot better in all areas. We had a better forecheck than in some of the earlier games, finished checks, which created some turnovers or separated them from having possession of the puck. I thought we did a better job of tracking back through the neutral zone, we didn’t give up as many odd-man situations and I thought defensively, we were a lot more responsible and aware of our assignments. When we did have a situation arise, Cal was unreal and deserves full praise for the work he put in tonight. It’s tough, just the other day we had Mike Amadio and Luffer and today we don’t….who’s going to pick up the goals? We did it by committee, everybody worked hard, everybody did a good job. Boko was really good. Boko deserved some high praise, he gets some high praise from the coaches, he did a hell of a job for us.

On Cal Petersen’s game over the past two wins
It’s still two games – It’s nice to see Cal playing the way he’s capable of. The early play was not really reflective of him, it was more of us as a collective group. He’s such a competitor, he’s got such a mentality that he doesn’t let things fester, he doesn’t let things bother him for a long time. He’s got to make sure that he’s getting a little bit better each day. I think I told you earlier, he’s a guy that could be wearing a letter on this team, that’s what he brings.

On Austin Wagner’s return to the Ontario lineup
Well – it’s a good thing he scored because he can’t count. We had five guys on the ice and he made six so he needed to rectify that situation in a hurry. As long as he can count to one, with the goal he contributed, I guess that’s good.

On an improved defensive effort tonight and whether it’s a reflection of the work that’s been put in at practices
Well, we’re trying. We’re trying to sure up all the areas on the ice and it takes some time. Yeah, we did a good job and I’m happy with it and we’ll keep working at it, but it’s like anything else, you know you’re only one game away or one period away from it slipping and that’s a part of the youth and the inexperience that we have. We’ve got to develop the consistency to perform that way each and every period, each and every shift. It’s a process – I keep talking about it, but we’re moving in the right direction. Sometimes you take two steps forward and maybe one step back. Hopefully we can have a good week of practices before we get ready for our next game against Stockton and continue to make some progress. 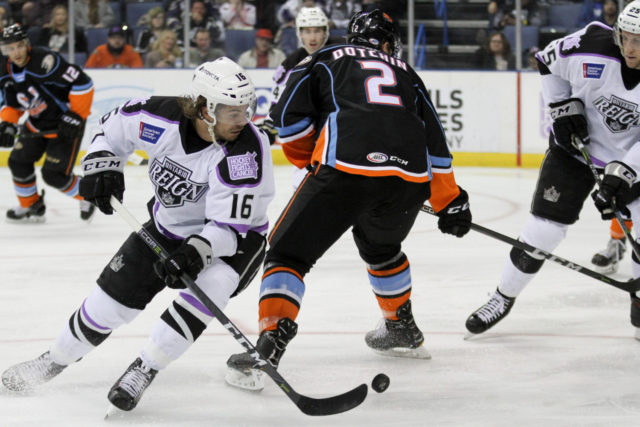 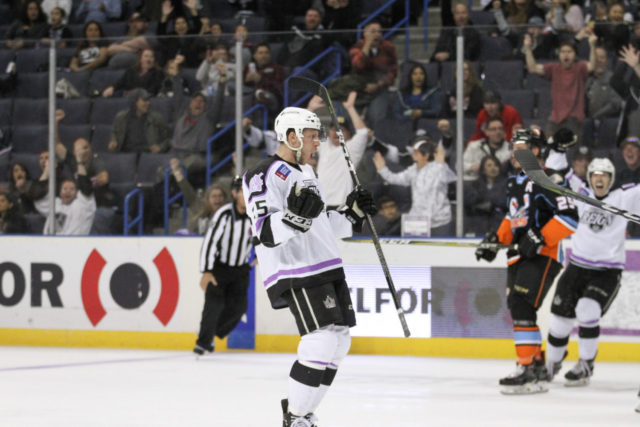 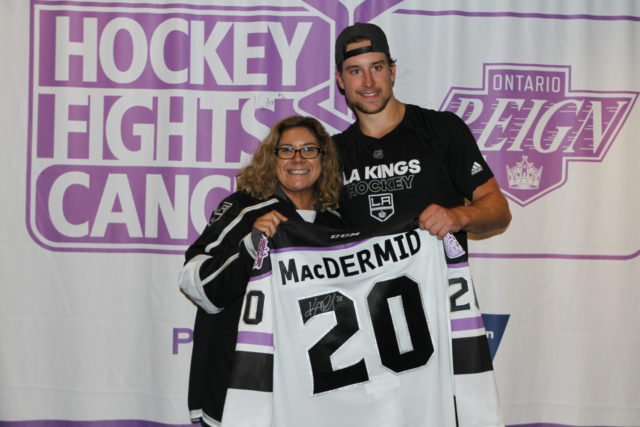