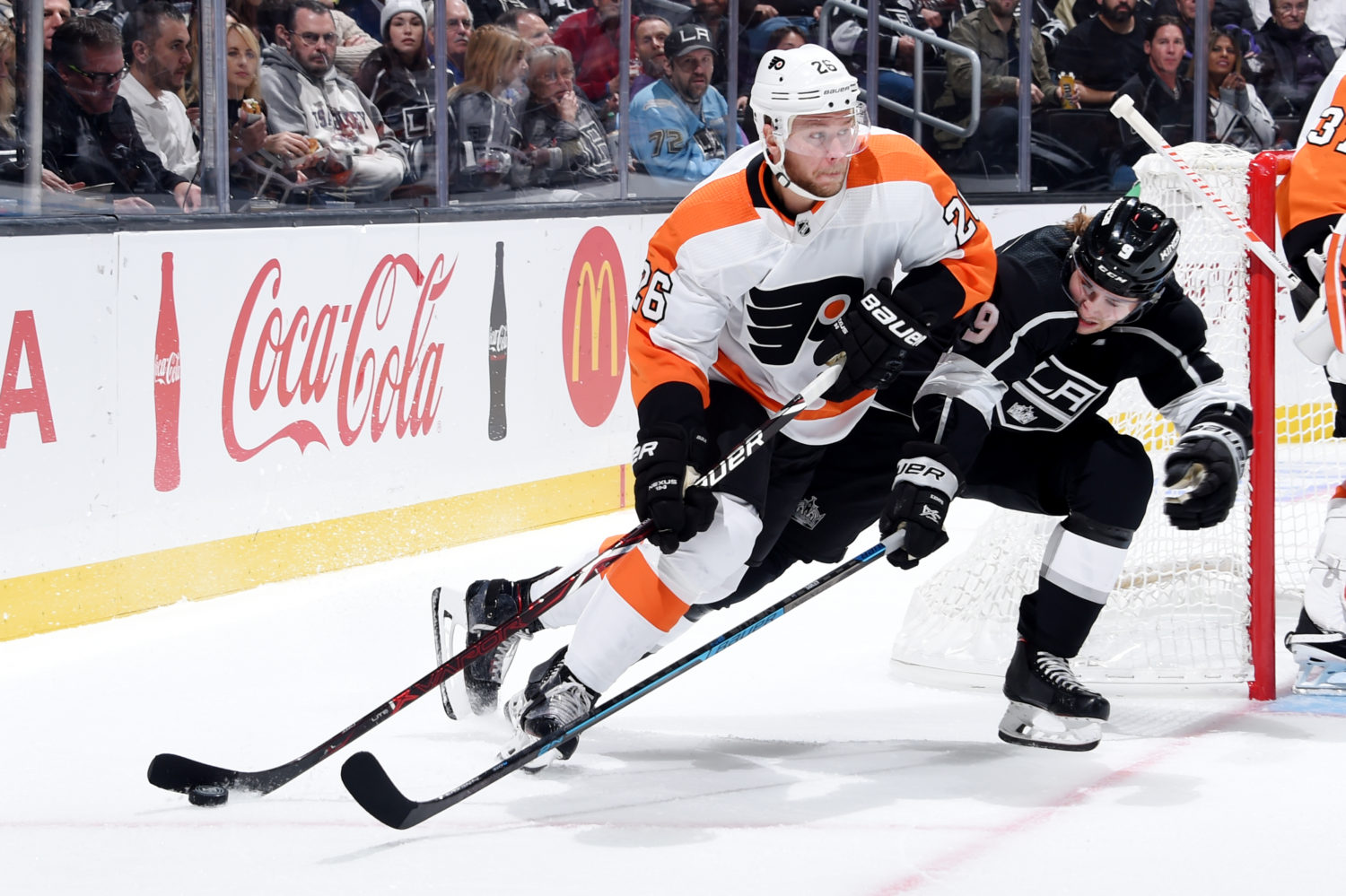 John Stevens, on the inability to equalize in the third period after building momentum:
We put ourselves in position where we were chasing the game. We were a step behind. I thought we had good momentum at the end of the period there. The Carter-Kovalchuk-Toffoli line came up big for us there. I thought the power play scored a big goal to get us back into the thick of things, but not enough sustained pressure. You can’t have ebbs and flows where you have one good shift and then you’re on your heels for two more. We had a tough time with their speed tonight. I just thought we looked a step slow and allowed their forecheck to create way too much for them.

Stevens, on the first period’s missed opportunities:
We knew they’d come hard on the forecheck, and I think we turned pucks over that turned into opportunities in our net. We didn’t get pucks deep, moved our feet, we didn’t create those opportunities. There was a good chance at the net that led to the five-on-three. Got to capitalize on that. We didn’t create a whole lot from that. We had one or two good looks there, but those are huge momentum swings in the hockey game. Usually when you don’t capitalize on those situations, you give the momentum to the other side.

Stevens, on any base cause in the rise in goals against over an extended period:
I’ll let you make that judgement. We can certainly be better in a lot of areas. We take great pride in keeping the puck out of our net. I think our penalty kill was an issue, but there’s been big sense of urgency on our penalty kill, which hasn’t been an issue. We haven’t taken as many penalties, and when we have, we killed them off. A step slow with the puck and a step slow checking to get the puck back. Too much time in your zone and too many bad things happen.

Stevens, on Jack Campbell giving the Kings a chance to win:
Yeah, listen, the first thing you want to do is blame Jack, right, because Jonathan Quick’s hurt, you can’t do that. He’s going in there, making big saves at key times and trying to give your team a chance to win. We’ve got to do more in front of him.

Stevens, on what has been working on the power play, and what still needs work:
I’d like to see us come up the ice and get set a little more fluidly than we have. I think we had trouble getting up the ice on recovered pucks. I mean, the power play, at the end of the day, you’ve got to win battles and recover pucks. I think once we got set up, we had good intention to move the puck quickly and attack the net, thinking about shooting the puck. But we’ve got to do a better job coming up ice, we’ve got to do a better job of puck recovery, we’ve got to a better job on faceoffs.

Stevens, on an assertion that the power play could benefit from simplifying its approach:
I thought we were changing that last game. I thought our intention was to shoot the puck right away and get people to the net. We scored two big goals because of it. Tonight, I thought we put the puck towards the net that led to some scramble chances around the net. That’s usually where your power play starts to get momentum from. So, simpler, better, harder, faster.

Anze Kopitar, on not capitalizing on chances in the third period:
We thought we played good in the third period, at least first half of the third, and had some chances and just couldn’t connect on any of them. There was a couple of close calls, but at the end of the day, if we want to win games we’ve got to find a way to score goals.

Kopitar, on whether tonight’s game was a step backwards:
Obviously we could’ve played better, but I thought the effort was there. Everybody cares. Everybody plays hard. We’ve just got to do it better.

Kopitar, on any base cause in the rise in goals against over an extended period:
Probably a combination of everything. We’ve got to start with the D-zone and keep the puck out of our net too and then that’s definitely going to help us create more offense and spend more time in the offensive zone, so that’s what we want to do.

Jeff Carter, on allowing a goal less than a minute after scoring:
It’s frustrating. Whoever it is, you go out and get a goal and it gets you back in the game. Then we give one up. It’s happened a bunch this year. It’s happened to my line a bunch. It’s just kind of the way things are going for us right now. We need to stick together and use that positive momentum to our advantage. We’re getting it and we’re giving it right back. It’s tough right now.

Carter, on the number of turnovers occurring right in front of the net:
Soup was great. He’s been great for us every game. We’ve hung him out to dry a bunch. A lot of turnovers, a lot of forced plays, a lot of just sloppy hockey in our own end that’s resulting in a lot of goals against and Soup having to make some really big saves for us. It’s a big area of concern for us.

Carter, on Campbell making some big saves tonight:
He’s given us a chance to win every game and we knew that coming in. And Quickie going down, we have full confidence in whoever’s in the net. Soup’s done a great job–some of the saves he made tonight. It could’ve been a lot worse. It’s on us in front of him to clean up our own end and make sure we’re making things easier for him.

Ilya Kovalchuk, on allowing a goal less than a minute after scoring:
Like Johnny always says, that’s a very important shift. After you score or after they score a goal. So we just need to be focused on those little things. And we’re playing in our building. We’ve got to play with way more energy than we did.

Kovalchuk, on playing a full 60 minutes:
Like I said, we just have to be consistent. We can’t play one game and we then think that we’re back at it. We have a home stand–five games–we’ve got to use it, use our advantage. Playing in front of our home crowd. It’s honor. You’ve got to be 100 percent ready every game. So that’s what we need to talk about tomorrow and start winning games.

–With the loss, Los Angeles fell to 46-85-17 all-time against Philadelphia, a record that includes a home mark of 24-44-8. Though the Kings have points in eight of their last 10 visits to the First Union Center, they’ve lost seven of the last 11 home games in the series. These teams will meet next in Philadelphia on February 7.

–The Kings have allowed at least three goals in eight consecutive games and at least four goals in seven of eight. They have been scored on in 24 consecutive periods since the 3-0 win over Montreal on October 11.

–Los Angeles has gone five consecutive games without scoring a first period goal. They have been outscored 14-5 in first periods this season.

–Ilya Kovalchuk (1-1=2) tallied his second consecutive multi-point game and has five points (2-3=5) over that span.

–Drew Doughty surpassed 30 minutes of ice time for the first time this season, logging a game-high 30:19.

The Kings are scheduled to practice at 11:00 a.m. on Friday, November 2 at Toyota Sports Center.