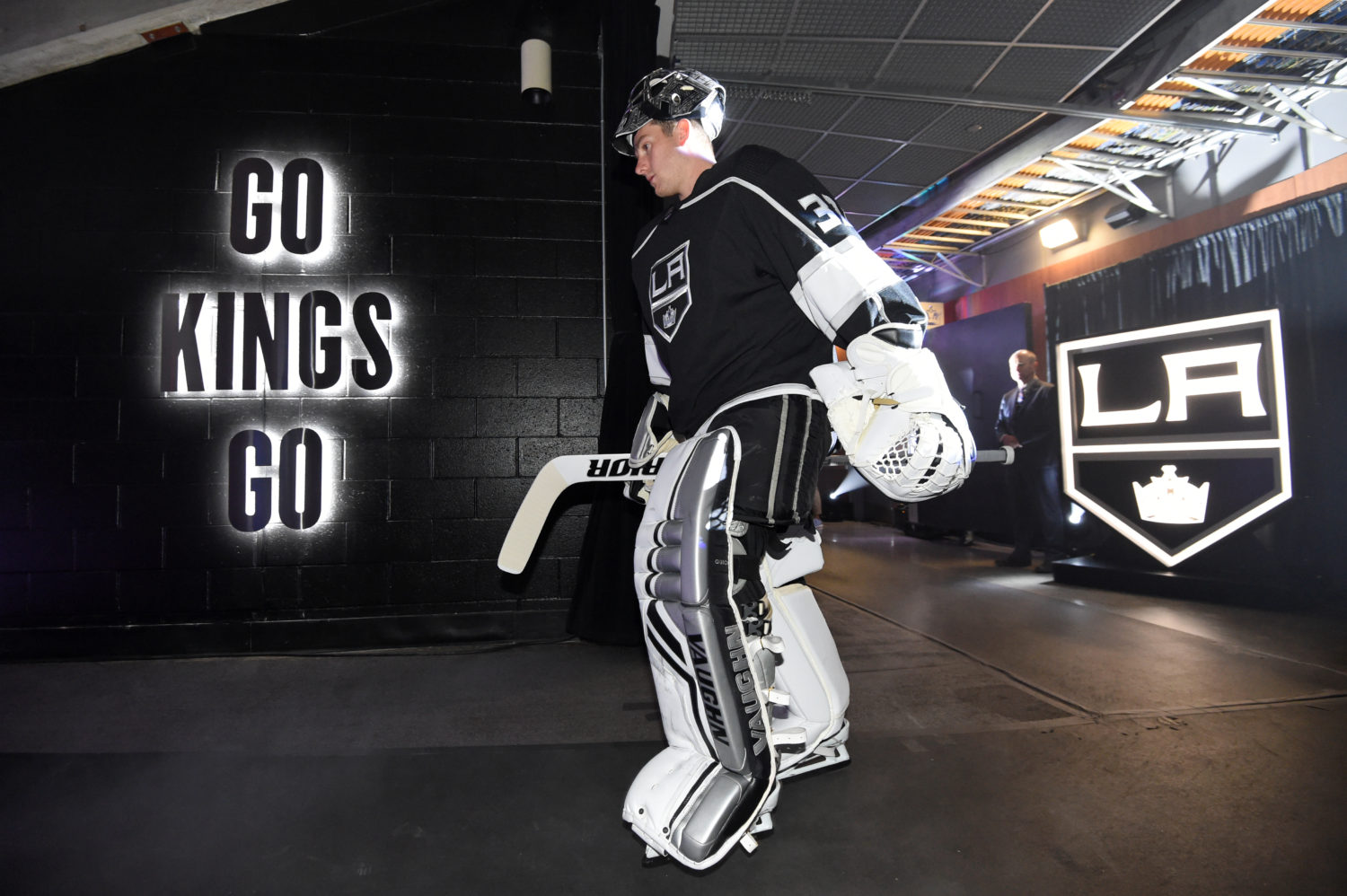 –Jonathan Quick’s return is close. There appears to be a very good probability that it will come either Thursday or Saturday. “I just want to feel good and confident out there and feel like you’re not risking further injury,” he said. “Just always constantly working towards those goals.”

The determination on when he plays Thursday, Saturday, or at a later time will ultimately be made through a conversation between John Stevens and the team medical staff and trainers. That conversation hadn’t happened by the time Stevens met with reporters after Wednesday’s practice, though the coach was encouraged by the goalie’s full participation. Quick (lower-body) left the ice immediately upon the conclusion of the post-practice team stretch, but he did get through an entire skate and practiced in the crease colloquially determined to be the “starter’s crease” while Jack Campbell assumed the opposite crease and Peter Budaj was confined to the neutral zone at the outset of the skate.

“You’ve got to get him through a full practice, which we did, and then I’ll just talk to the trainers and the medical staff, and I’ve got to wait for them to tell me, number one, that he’s ready to go, and number two, there’s no risk of re-injury,” Stevens said. “If they tell me that, then that’s what I need for the green light.”

At this point in the rehab schedule, Quick, who skated on his own Monday, faced shots Tuesday and returned to an official practice Wednesday, wasn’t preoccupied with the injury.

He’d been texting back and forth with Jack Campbell while the team was on the road for the past week.

“He played great,” Quick said. “Step in and go on that road trip, playing in some tough buildings against some really good hockey teams, so I thought he played phenomenal for the guys. We knew that. We knew he’d do that. He’s a great goalie, and he did that last year for us. Anytime he gets the opportunity, he’ll step in and play well.”

“Over the past year we’ve gotten to know each other really well. Being a goalie and going through the situations, it’s always good to have somebody to talk to, so I thought it was good to be able to talk over the game a little bit and give him some restaurant requests.”

–More on the revamped forward lines: Tyler Toffoli was to the right of Anze Kopitar. LAKI doesn’t have any strong feelings about where and with whom players play, but he does recall that lethal combination from the 2015-16 season. Milan Lucic was obviously a major factor in that line’s offensive success, but my word, the Kings posted a 59.0% raw Corsi for while Toffoli was alongside Kopitar that season to go along with a 69.25 GF% (!) and a 64.4% share of high-danger chances. Since then, his possession, goals-for and chances-for rates alongside Kopitar have been muted in their more irregular time together.

“Alex [Iafallo] isn’t Looch, but Alex gets to a lot of pucks as a tenacious forechecker, Kopi’s a high-possession guy, and Tyler has the ability to work to get open. That’s why they’ve had success before,” Stevens said. “Kopi likes to have the puck a lot. He can really protect the puck well in the offensive zone. Tyler really reads well off the puck and he can really shoot to score. I think that’s the big reason for me that the line has success together, and I think there’s some chemistry there.”

Stevens liked the work ethic he saw not only from that group, but from the entire team at Wednesday’s skate.

“We’re just looking for something that works,” he said. “We’ve tried a couple of things that haven’t worked, and I think we need to keep trying to find a solution to make us a better team.”

–Dustin Brown skated in a red no-contact jersey with his teammates. He can’t return until October 28 after having been placed on LTIR earlier this month, but was integrated into aspects of practice that did not require contact.

The Kings are 0-for-21 on the power play this season, and while there are challenges on the man advantage that go beyond Brown’s absence, his production history on the power play and strength on the puck in entering the zone, not to mention his net-front presence, are aspects that the team could really use right now.

“I just think our movement to get the play established up top, we just have to work out that,” Stevens said. “I think it’s coming, but I do think there’s some work that needs to be done just to allow us the ability to get set up at the top so we’re attacking from the top that’s going to open up other things, but we’re just not quite in sync yet.”

–Drew Doughty blocked a shot with his lower leg in practice and left the ice to get it looked at by Chris Kingsley on the bench. He quickly returned to the ice, stretched the leg and put pressure on it and quickly returned to regular drills. Doughty skated with Jake Muzzin on Wednesday, followed by defensive pairings of Phaneuf-Martinez and Forbort-Fantenberg. It appeared Paul LaDue was the extra defenseman. More clarity on lines and pairs should be learned at Thursday’s morning skate.