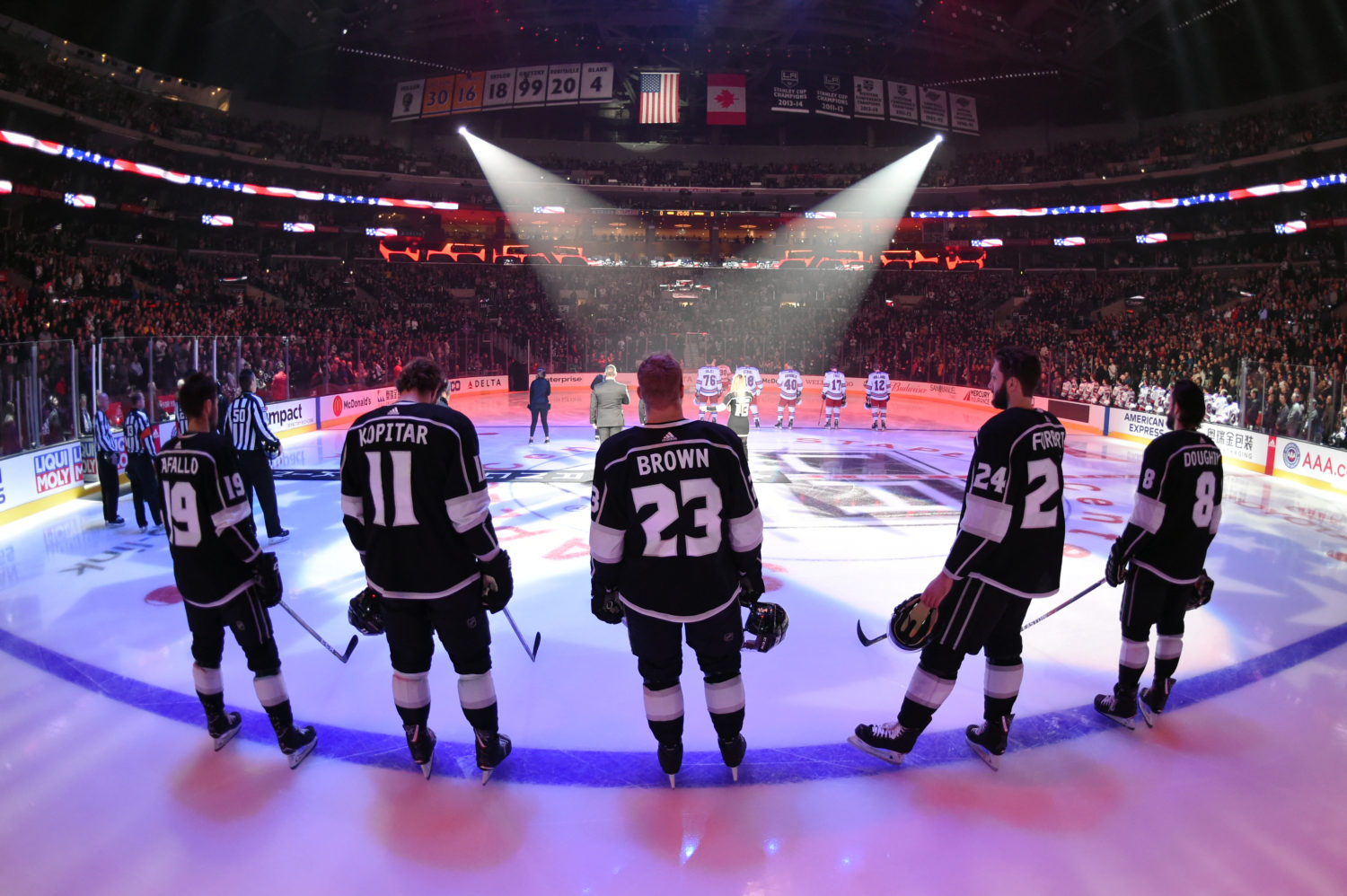 NHL rosters must be submitted by 2:00 PT Tuesday, and while the Kings have one preseason game remaining tonight against the Anaheim Ducks (7:00 p.m. LA Kings Live / Prime Ticket / I Heart Radio), they’ve come very close to paring their roster down to 22 players that will be on Tuesday’s submitted list. A general understanding of that list is below and is based on dozens of conversations with hockey operations figures from the summer, rookie camp, training camp, all through last night’s game and today’s morning skate. Notes on what we expect to see on the final roster:

–It is becoming very possible that Jaret Anderson-Dolan, who turned 19 on September 12, will make the team out of training camp as the extra forward. The decision on the final forward spot is coming down most acutely to Anderson-Dolan and Austin Wagner, both of whom had excellent camps, by all accounts. The difference is that Anderson-Dolan, as a player in his 19-year-old season drafted out of major junior, would not be able to return to the Kings until the conclusion of his WHL season if Los Angeles made the decision to assign him back to Spokane. (Players drafted out of major junior may only play NHL or major junior until their 20-year-old season, and can’t be recalled during the year.) You often hear about the “nine-game rule” attached to players like Anderson-Dolan, and that may apply in this case, as well. Players on entry-level contracts may play nine games in the NHL before a decision may be made on whether to send them back to junior hockey. Once they play in a 10th game, the first year of their contract is ticked off, making them eligible for free agency one year earlier, a scenario that virtually all teams try to avoid. If Anderson-Dolan, hypothetically, only appeared in nine games and was then returned to Spokane, it would not consume the first year of his entry-level contract. Anderson-Dolan was a long shot to make the team at the start of rookie camp, but because of Gabe Vilardi’s back injury and Jonny Brodzinski’s shoulder injury and subsequent surgery, a path to a roster spot opened up that he took advantage of. He was excellent at the World Junior Summer Showcase late in summer and reported to camp in very good game shape after a strong development camp showing. Even if he’s ultimately returned to the WHL at some point, the Calgary native would be a very strong candidate to make Canada’s world junior team.

–Wagner opened up a lot of eyes in training camp with his high-speed, north-south game that allows him to get to a lot of pucks and win battles along the boards. Make no mistake about it: his game-breaking speed is an asset the Kings are in search of, and it appears as though he’ll get an opportunity to show it off at the NHL level very soon. This is a good omen for the 21-year-old who got into only 50 games in Ontario last season after returning from off-season surgery to repair a torn labrum. He improved as camp progressed, scoring on Ryan Miller on a breakaway in Anaheim on Wednesday and breaking free for several scoring chances against Vegas last night. Even if he opens up in Ontario, he’d be among the first players considered for a recall. I have it as Anderson-Dolan 60% to make the team, Wagner 40%.

“There’s guys that are fast, and then there’s guys that are really fast. He’d be elite in the league,” Stevens said of Wagner. “I think he might be able to go up against anybody in the league in a straight line. Some guys have agility, strength. They say McDavid’s fast, but he’s also got agility, quickness. Wags to me is more of a straight line speed guy, but his acceleration is exceptional. The fact that he understands his game, that he wants to play a straight line game, as soon as he gets the puck – you saw it last night a couple times – he gets a little bit of space in the neutral zone, and he knows he can probably get by that defenseman. His willingness to take pucks to the net in those situations I think is a sign of his courage. I wouldn’t call him a real creative guy, but he’s got good skills. He’s got good puck skills where he can take a puck and make a play or lead a forechek and get to open ice, and he shoots the puck pretty well. I wouldn’t call him a ‘dynamic skill player,’ but his speed is dynamic, which really creates a lot of opportunity for him.”

–I’m not expecting Emerson Etem to sign a one-year, one-way contract, and I don’t have an indication that he’d come to terms on either a two-way or AHL contract. He’ll meet with the team today to discuss what their options are moving forward. From the team’s perspective, they’ve had some success signing players on PTOs – see: Devin Setoguchi and Brooks Laich – and may pitch a similar arrangement to Laich’s in which Etem could stay with the club for a continued look. (I have no indication that Etem would agree to that type of arrangement.) Etem is a veteran with significant Stanley Cup Playoffs experience and has shown his trademark speed during camp, as well as a finishing ability that has netted two goals. But in my check-ins with hockey operations throughout the preseason, his praise was a touch more muted than the effusive Anderson-Dolan and Wagner praise. He logged 7:55 in last night’s game.

–Daniel Brickley is another player who improved as camp progressed, and his outing Friday at Vegas was outstanding. He was assertive, moved the puck confidently and showed that he can play with NHL pace and intensity. He’s waiver-exempt, though, and the team wants him to play every day and has no intent to place Oscar Fantenberg or Paul LaDue on waivers, so he’s expected to open the season in AHL-Ontario. Brickley is another player who’d be among the first to get a call if the Kings needed a defenseman. “…I thought Bricks, for me, that was probably his best game where he was confident with the puck, he closed on people quickly, he had a good stick and really took a step in the right direction like we’d want him to,” Stevens said after Friday’s game.

–Kurtis MacDermid was a longshot to make the team based on the numbers game. I’m expecting the team to place him on waivers with the intent to assign him to AHL-Ontario, and he’ll be among the players who would draw interest on the wire. There’s no knocking his approach, preparation, game understanding, workout regimen, toughness and fighting ability. But the Kings are looking to continue to get faster, and MacDermid faced an uphill battle to make the team from the outset of camp.

–Derek Forbort will play tonight against Anaheim, he and John Stevens confirmed. Expect him to play alongside Drew Doughty. Tonight’s roster should be a mostly accurate indication – not a confirmation, mind you – of the lineup the team intends to use Friday night against San Jose.

–Gabe Vilardi took the ice in full gear and handled pucks alongside Head Athletic Trainer Chris Kingsley for 20 minutes or so. There’s no timetable for his return. He will not be healthy when the season starts. Per hockey operations, he will open the season either on IR or injured non-roster.

–Michael Amadio made the team. He’s your opening night 3C.

John Stevens, on players that have exceeded expectations in training camp:
I’ve been impressed with Michael Amadio. I mean, we had high hopes for him because we think a lot of him. Just hope that the commitment he made over the summer is going to translate, and we think it has. Just put him in situations in training camp where he played against top guys that he maybe doesn’t play against all the time. He’s done a really good job of that. Kills penalties and is good on faceoffs, so for me – I don’t want to say a ‘surprise,’ but really pleasant with what he’s been able to do. I think Anderson-Dolan has made a good account of himself, not that I’m surprised there either, but I think he’s played really well. The kid that I’m maybe most surprised with is Wagner. We knew he could skate, but to see him in an NHL game and to have the confidence to take the puck to the net and beat a guy with just a good, quick skill play and then use his speed to challenge teams’ defense and feel comfortable in an NHL setting, I’ve been encouraged by that.