The Ontario Reign roster may be youthful as a whole, but you can’t say there will be a lack of leadership.

One week ago, the Reign had just one player – forward Brett Sutter – classified as a veteran by AHL standards (over 320 professional games played between the NHL and AHL). Fast forward to today and two more have joined the team in forward Matt Moulson and goaltender Peter Budaj. Not only do both players bring high skill levels at their respective positions, but both veteran players bring invaluable experience to their younger teammates, having appeared in over 1,000 NHL games between the two of them.

Moulson started his professional career with the Kings organization in 2006 with the AHL’s Manchester Monarchs. The 6-1 forward spent three years between Manchester and Los Angeles before he moved onto the New York Islanders, where he blossomed into a full-time player at the NHL level. Moulson noted several veterans with the Kings and Islanders that helped him ease into the professional game.

“I think for the most part, every veteran guy on any team I’ve been on has done that,” Moulson said. “I remember coming into LA and having guys like Rob Blake and Mattias Norstrom, Tommy Kostopoulos, kind of take you and show you the ropes so to speak. In Long Island, I had the chance to live in Doug Weight’s guest house with JT [John Tavares].”

The veteran winger has now himself become that player that takes the younger guys under his watch. Ontario Head Coach Mike Stothers singled out Moulson as a player that helps to look after the Reign’s younger players.

“He’s just a professional both on and off the ice and he’s a guy that cares about his teammates,” Stothers said. “He looks after the young guys especially, takes them out on the road for dinner, has them over to his house and that’s what it is, he’s the big, older brother that they all gravitate to.”

“There’s a guy that’s had a great professional career and the thing with Moly is he doesn’t get discouraged by the fact that he’s playing in the American League, he actually relishes it. He knows his role now is to help the Matt Luff’s, the Austin Wagner’s and the rest of the young forwards to experience what he’s experienced in the NHL.” 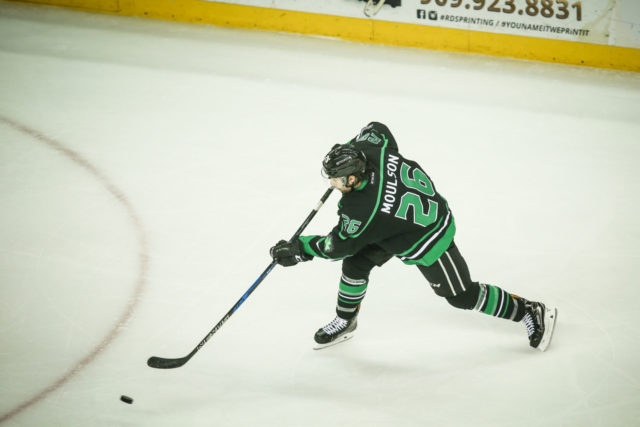 Helping out the younger players is something that Moulson feels is now a part of his job as a veteran player. He’s gone through the same situations, the same challenges that up and comers on the Reign roster have gone through and he’s able to use his own experiences to help them develop.

“Having been around the game, having gone through it, having been in the league for numerous years playing pro hockey, there aren’t too many things that you haven’t seen or gone through yourself,” he said. It’s an easy way to help guys out and make them feel more comfortable, whether it’s something on or off the ice that you see or notice, I think that’s a huge responsibility for guys that have been here before.”

Moulson has shown that he can still bring it on the ice as well. After he was assigned to Ontario from the NHL’s Buffalo Sabres last season, Moulson compiled 46 points (18-26-46) from 49 games played, three points shy of Michael Mersch’s team-leading total in 16 less games.

Joining him with the Reign this season will another veteran that has shown he can still bring it on the ice in Budaj, the 35-year-old goaltender that posted a record-setting 2015-16 campaign with the Reign. Budaj was named as an AHL First Team All-Star in 2016 after he posted a 42-14-4 record, a 1.75 goals against average and a .932 save percentage. While that season, Ontario’s inaugural campaign in the AHL, was a successful one, Budaj is quick to point out that neither he, nor the team, will get anywhere looking in the past.

“I feel very good [in this organization] but you can’t look at what happened two or three years ago when I was here,” he said. “Today is a new day and this season is a new season. Obviously, it feels good to be on a team where you know a few guys and the coaching staff that you have a good relationship with, but I just want to take this as a new year and a new challenge and keep working hard.”

Budaj is expected to split time with Kings’ prospect Cal Petersen this season, a new role for the veteran goaltender. Budaj appeared in all but eight games in his first go-around with the Reign but with Petersen, one of LA’s top prospects, in line for time as well, his second trip with the organization could add on a mentoring capacity to that of his usual goaltender role.

“He’s got an opportunity to come back here and help us in maybe a little bit different capacity, maybe a little bit different of a role,” Stothers said. “He’s another guy that sets the tone in practice with his work ethic and he’s a good leader for our hockey club as well. He’s a veteran guy that’s experienced just about everything you could experience, the highs and lows of his position, so he’s going to be extremely valuable for Cal.”

The Slovakia native doesn’t view lecturing others as his place on the roster – “that’s why we have a coaching staff,” he said – but he knows that by coming into the office and doing things the right way, he can set the right example just through his own work ethic.

“I’m a firm believer that actions speak louder than words and you can say whatever you want but if you don’t back it up with your actions, words mean nothing,” Budaj said. “It’s not just like that in hockey but everywhere else in life. I just want to take this opportunity to work as hard as I can and support my team and help the team the best I can.”

For younger Ontario players, Budaj is a great example to look at as someone who’s been through it all as a professional. He’s played at length in the NHL and the AHL and knows what it takes to succeed at this level. Budaj notes that as a netminder, his job isn’t to be the rah-rah voice on the ice but to be the rock in net, the steady presence that stays the same regardless of the situation.

Moving into the upcoming season, players like Budaj and Moulson, along with Sutter, will be counted upon to help lead a group of talented but young players through the inevitable uncomfortable situations that arise.

“I think the team needs to see that from veteran players, that they don’t get rattled and they stayed even keeled in situations that they’re not familiar with,” Budaj said. “You just try to lead by example and you should carry the load and try to be the best you can.”