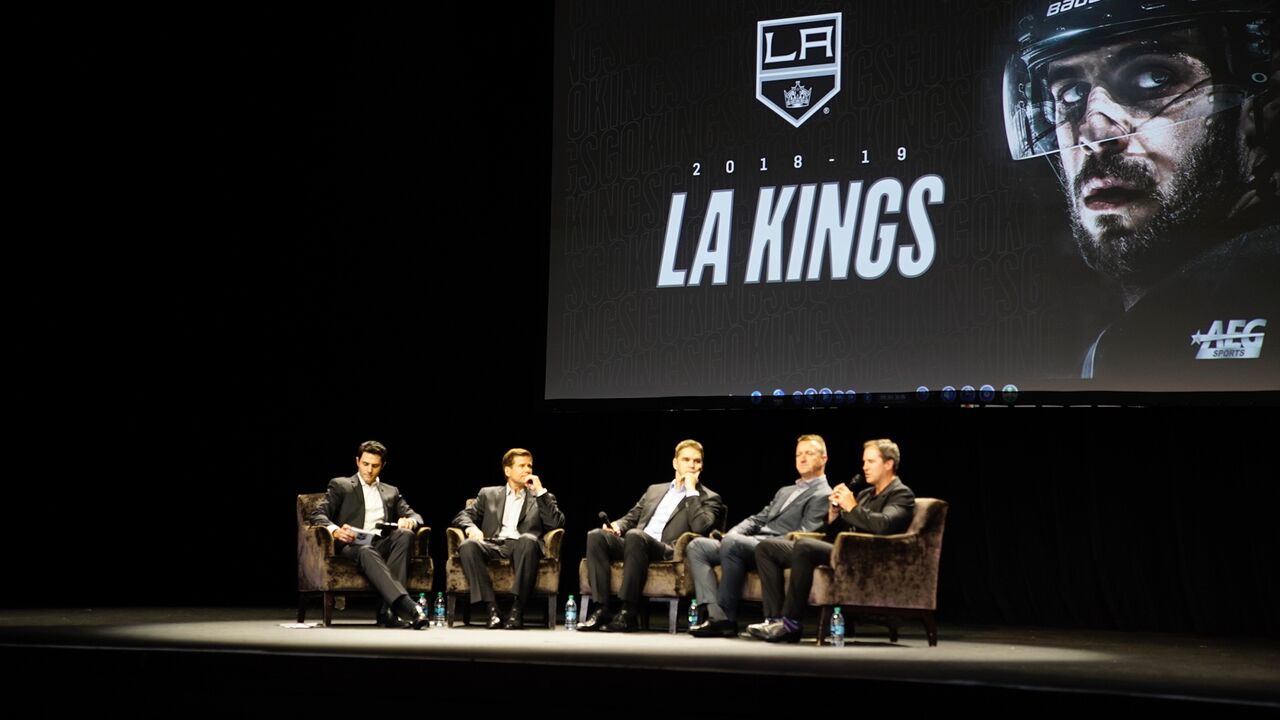 The Los Angeles Kings held the 2018 State of the Franchise event for season ticket members yesterday evening at The Novo by Microsoft in Downtown LA – Kings TV voices Alex Faust and Jim Fox emceed the event, which included Luc Robitaille, Rob Blake, Nelson Emerson, Daniel Brickley, Dustin Brown and Samson Lee as guests throughout the evening. The event was season-ticket member exclusive so I won’t get into too many direct quotes, but there were several topics discussed of note during the event, as well as during media availability with Luc and Rob –

– The viewpoint across management with the Kings is that this team is still in a Stanley Cup contention window. Both Robitaille and Blake stated in their media-exclusive interviews that, if healthy, they viewed the 2018-19 Kings as a team that can contend. Both men stressed that the Kings strength starts down the middle with a Top 3 of Kopitar-Carter-Kempe that is a major strength of the team. In his presentation during the event, Blake pointed to Carter’s injury last season as a major detriment to the depth of the 2017-18 Kings.

In addition to Carter’s absence, Blake mentioned “elite scoring on the wings” as the other piece that the Kings missed. The number fluctuated a bit throughout the evening, depending on who or when it was asked, but it came down to estimating between 20 to 30 goals for the piece signed to fill that void, Ilya Kovalchuk, this season.

– Prospects, Prospects, Prospects – There was a lot of chatter and a lot of excitement about how the prospect pool has shaped up, especially considering the last two draft classes and the recent haul of undrafted free agents added. If you read what Jon writes then it will be of no surprise that the Kings are focusing on adding speed and skill and that has been shown through the players selected in the draft and signed as younger free agents out college, juniors or Europe, especially in the 2017 and 2018 offseasons.

On that note – several young players were pegged as ones that could or should push for a roster spot. Vilardi and Anderson-Dolan were both mentioned as guys who should give it a run during training camp to make the NHL team. Nelson Emerson called Anderson-Dolan a guy who “plays fast and gets on pucks” and Blake referred to him as “tenacious” during his media availability.

Emerson noted that Drake Rymsha should start the season in the AHL with the Reign – Also spoke on three players from 2018 draft class (Kupari, Shafigullen, Sodergren) that will be staying in Europe this season and competing against men in European leagues.

Blake also singled out Mike Futa, who heads up the Kings’ efforts to add undrafted players from college, juniors or overseas. The Kings added players like Alex Iafallo, Daniel Brickley and Cal Petersen, amongst others, which helped fill voids from not having as many draft picks in the past.

– On the injury front – Robitaille and Blake both confirmed that Vilardi has an ongoing back injury that is something he will need to manage every day, with Blake mentioning during the presentation that it can be difficult to explain that to a young player. From Blake’s media availability, he said that Vilardi is looking “probably doubtful” for rookie camp next week due to re-aggravating his back while skating at home shortly before the World Junior Summer Showcase, where he was scheduled to play for Team Canada. Blake hoped that Vilardi progresses well enough to return during main camp (beginning on 9/14 in El Segundo).

Additionally, Blake said that Derek Forbort is coming off of a back injury that is unrelated to the knee injury he suffered last season and that the team will need to evaluate him when he arrives for camp. He also said that Jeff Carter is “100 percent” heading into camp.

– Lastly, during the presentation, Blake announced that the Ontario Reign will practice out of the Toyota Sports Center in El Segundo this season – I am planning to pen a separate piece on this early next week after talking with a few more people, but early observations are that the focus is on the advantages this creates for player development, having both teams under one roof. More to come there.

– All photos via LA Kings 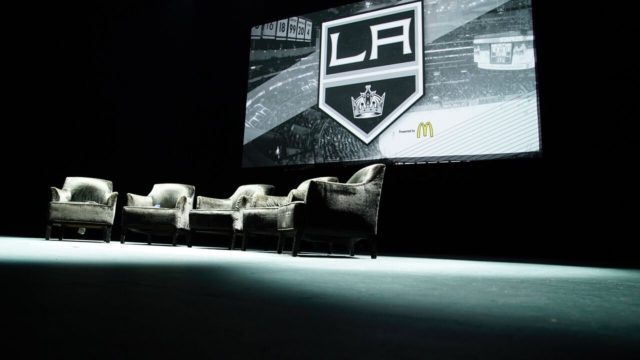