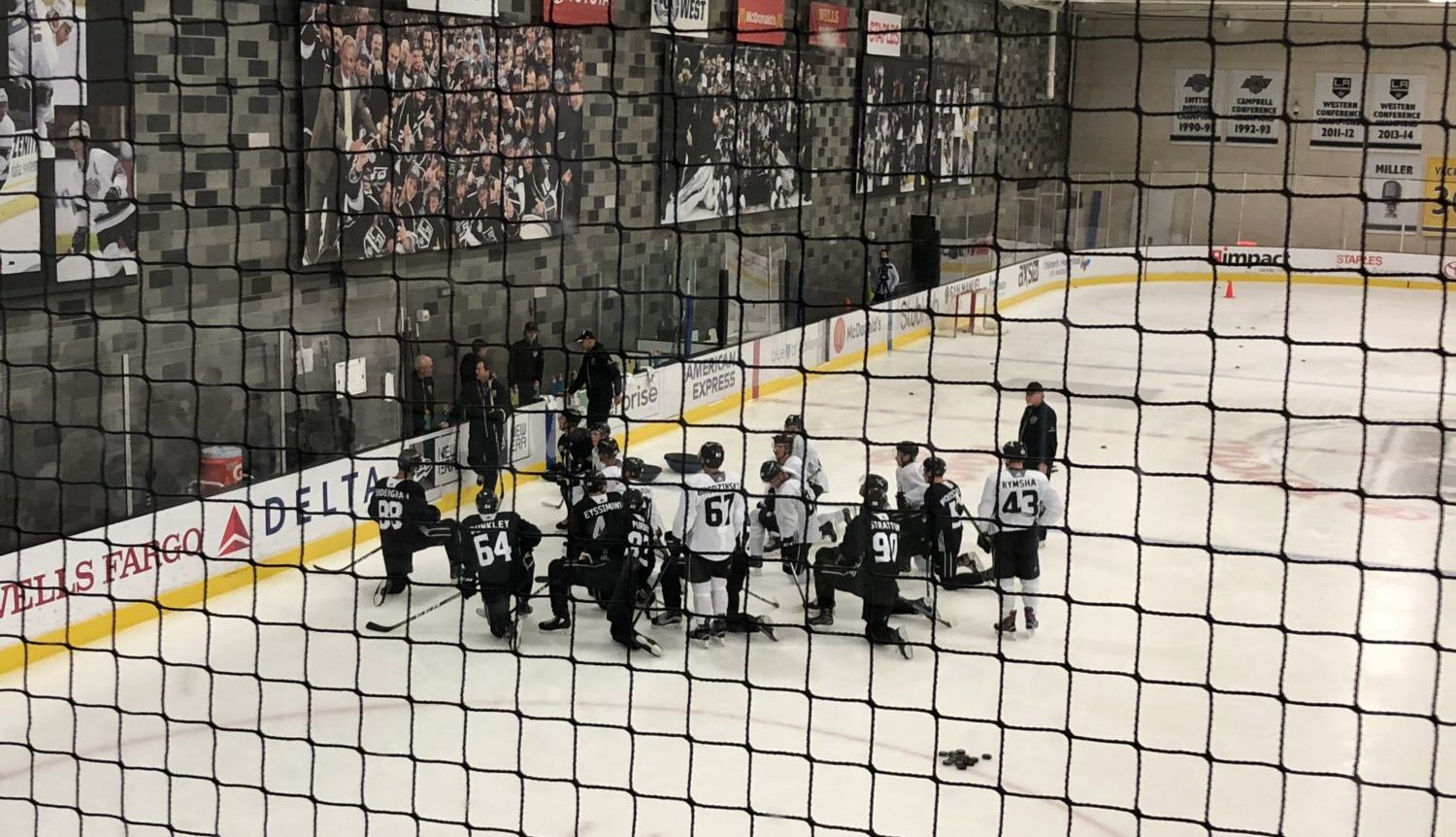 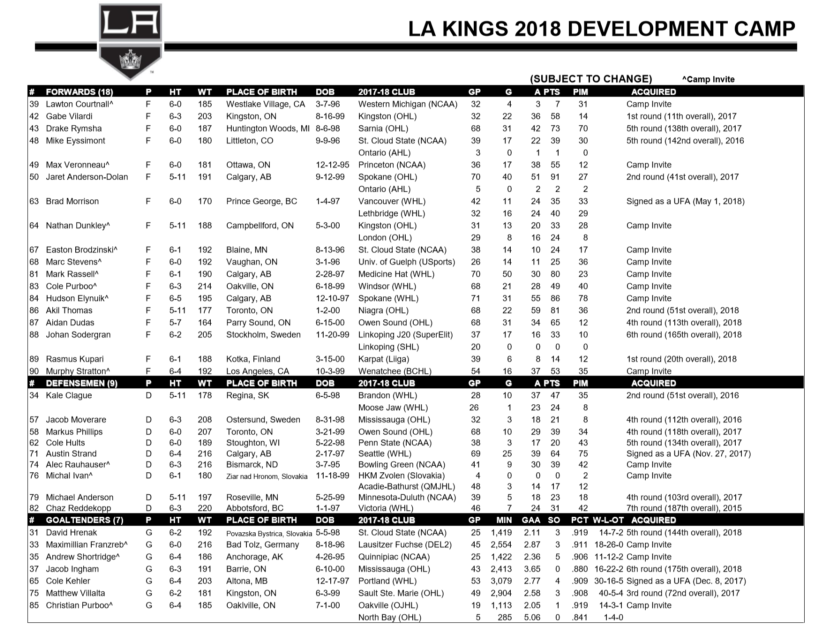 Keep in mind that these dates and times are always subject to change and likely will. In previous years, the groups have taken part in team bonding exercises in Manhattan Beach and will likely do so again; those excursions have previously taken part in the afternoon.

MAX VERONNEAU | A player expected to draw considerable interest from NHL teams this coming season, Veronneau’s 55 points (17-38=55) in 36 games during his junior year at Princeton ranked second in NCAA hockey. “He’s someone where you have confidence as a coach when he’s on the ice that things are going to be done well because he’s very consistent in his habits, does things extremely well and repeats that over and over again. That’s why he’s going to be a pro hockey player,” Tigers coach Ron Fogarty told The Trentonian. One of 72 Hobey Baker Award nominees, Veronneau attended Vegas and Calgary’s development camp last summer.

ALEC RAUHAUSER | Another intriguing pro prospect, Rauhauser ranked second among NCAA defensemen with 39 points (9-30=39) over 41 games with Bowling Green. The 6-foot-3, left-shooter who turned 23 in May still has two years of college eligibility remaining and attended Toronto’s development camp last season. He was the WCHA’s Defenseman of the Year and First Team All-WCHA, and became the first Bowling Green defenseman in 23 years to earn Division I All-American honors when he was named a Second Team West All-American. Other Bowling Green All-Americans include Rob Blake, Nelson Emerson, Ken Morrow and George McPhee.

MARK RASSELL | A forward with 86 goals over his final two WHL seasons, Rassell, who hit the 50-goal mark during his overage season with the Medicine Hat Tigers, attended Calgary’s development camp last summer. “I called my agent (Wednesday) and told him I’m starting to look into the schooling option as well. I’m going to start accepting recruiting trips, fly out and look at those options,” Rassell told Ryan McCracken of the Medicine Hat News. “He said that’s almost better for pro because I wouldn’t sign an AHL deal, I’d sign a tryout deal with the intention of earning an NHL contract, so that works well for me. I can look at all my options and choose where I want to go for development camp this summer and into the fall. I can basically say, ‘I’m getting an NHL deal from you or I’m going to school.” Barring an entry-level contract, Rassell will join the powerhouse University of New Brunswick CIS program.

HUDSON ELYNUIK | The son of former Winnipeg Jets forward and two-time 30-goal scorer Pat Elynuik, A 2016 third round Carolina draft pick, Elynuik is a hard-nosed, goalie-screening 6-foot-5 power forward who notched 31 goals with WHL-Spokane last season and is the youngest of three brothers, the oldest of whom, is a scout for the Regina Pats. Elynuik wasn’t offered a contract by Carolina this spring and is a free agent. “Carolina drafted WHL Spokane centre Hudson Elynuik 74th in 2016,” Elliotte Friedman wrote in a 31 Thoughts published April 11. “After 86 points in 71 games during the regular season, he had seven points in the playoffs before the Chiefs were eliminated by Portland in a decisive first-round Game 7. He’s a big boy, bigger than his father, Pat, who went eighth overall in 1986. (He played 506 NHL games for Winnipeg, Washington, Tampa Bay and Ottawa.) There is word he will not sign with the Hurricanes and is going back into the draft. Deadline is June 1.”

LAWSON COURTNALL | More progeny of NHL alumni: Lawson is Russ’ son, not Geoff’s, which should – how should we say this – sit much better with LA Kings fans. He attended Columbus’ development camp one year ago and is a 2015 Clark Cup champion with the Sioux Falls Stampede. Upon enrolling at Western Michigan, his coach, former Kings coach Andy Murray said, “Lawton is highly competitive and possesses great speed, which puts a great deal of pressure on opposing defenseman. He’s going to remind a lot of people of Trevor Elias a fan favorite at Lawson Arena.” An L.A. native who grew up in Westlake Village, Courtnall had four goals and seven points in 32 games with the Broncos in 2017-18. His sister, Ally, won a national championship in soccer and competed in track and field at UCLA after attending Oaks Christian.

-There will be more profiles, notes and stories throughout the week, courtesy of LA Kings Insider, Reign Insider Zach Dooley and LAKI Associate Jessi McDonald. One additional note, because I was asked: Sheldon Rempal and Daniel Brickley don’t participate in development camp; they’re part of a group of more advanced players that skates in the morning – Michael Amadio has also been a part of this group, as has Jack Campbell – at Toyota Sports Center. 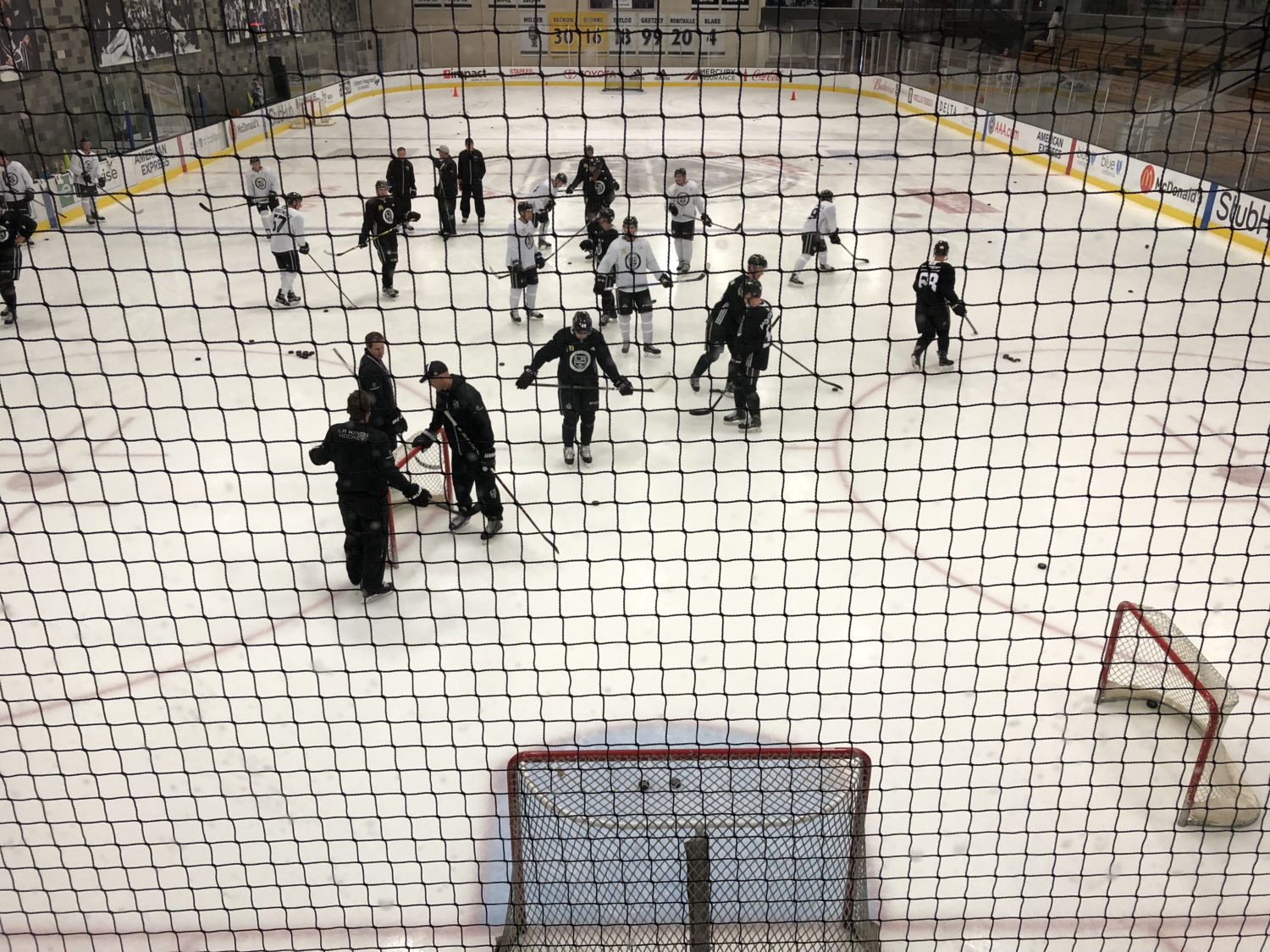