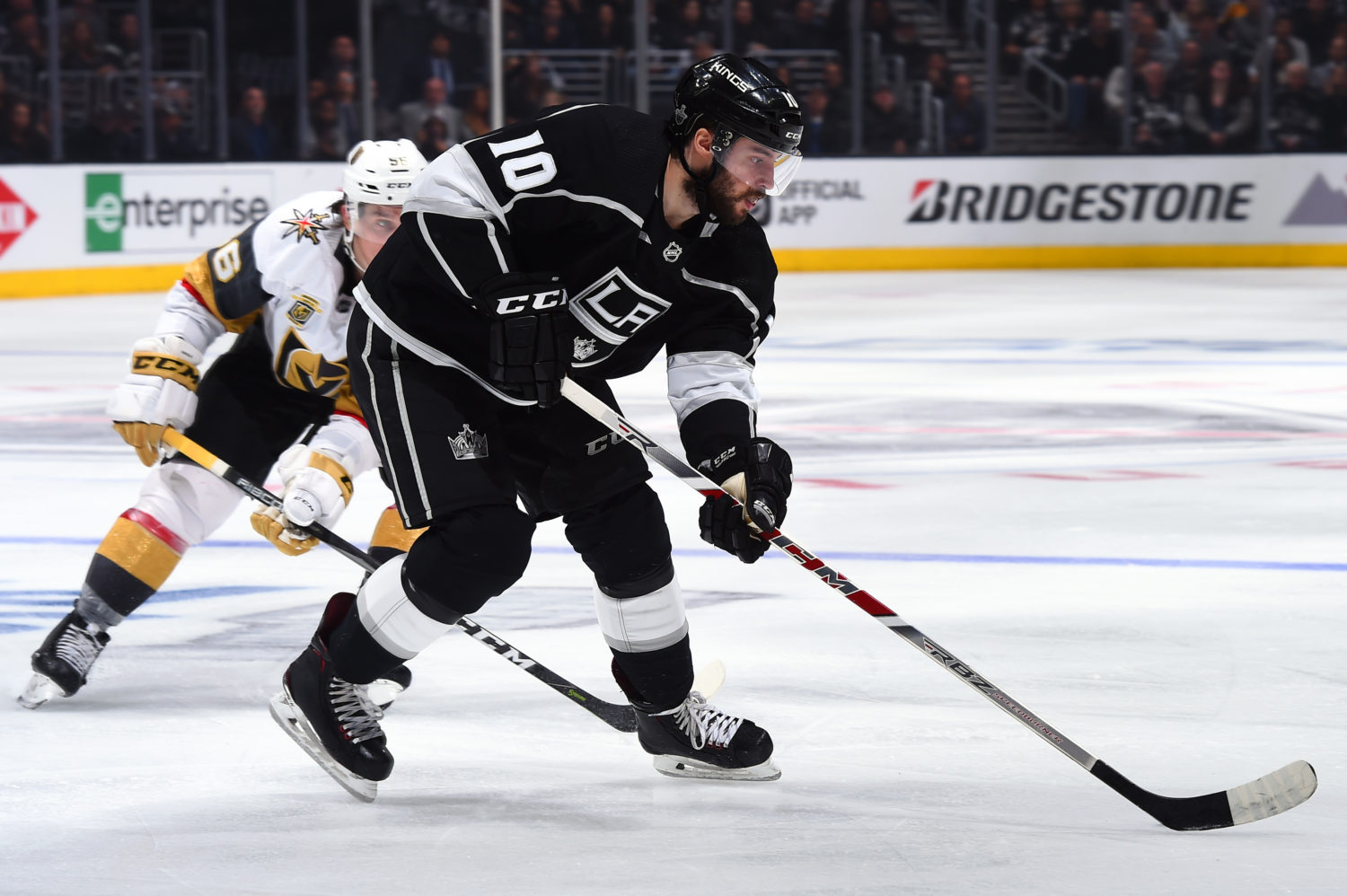 –As noted last month, no decision on whether the Kings extend a qualifying offer to Toby Rieder has been made. You should expect a decision between the end of the draft on Saturday and when qualifying offers are due on Monday.

“That’s going to come to a decision probably right before the period, whether we offer that qualifying offer or not – whether we change the look or acquire a player on our team or what we look like after the draft,” Rob Blake said. “It’s kind of a holding pattern for us right now with him.”

As a refresher, Rieder’s hypothetical qualifying offer is a sizeable $2,450,000, per CapFriendly’s calculator. If Los Angeles does extend a QO, they could still re-sign him at a lower cost but would have to contend with a number of other teams also kicking the tires on the fleet-of-skate German who totaled four goals and six points in 20 regular season games and was held scoreless in four playoff games after his February trade. Acquired from Arizona along with Scott Wedgewood in exchange for Darcy Kuemper, who was going to test free agency and not re-sign with the Kings, Rieder is coming off a two-year, $4.45-million contract he signed with the Coyotes in October, 2016. His career-high in scoring is 37 points (14-23=37), set in 2015-16.

The last time the Kings re-signed a player they did not qualify as an RFA was Keaton Ellerby during the 2013 off-season.

-A paragraph in an article by The Athletic New York last week contained a note on John Tavares that raised a few Kings fans eyebrows:

Per Arthur Staple on June 12:

Who does Tavares want to call him? It’s long been believed that the Kings and the Leafs would be his preferred destinations if he could choose. Los Angeles has to try and sign Drew Doughty after next season and has the least cap space going into 2018-19, so that seems like a stretch.

On a quick note, Staple is tremendously plugged in with the Islanders. When he puts that in print (err, pixels), I don’t doubt it one bit. But given the Kings’ cap structure as it relates to Doughty, as Staple noted, it just doesn’t seem too feasible. Anecdotally, when I was asking about a player that had surfaced in trade rumors during the 2017-18 season who had I had heard had expressed a desire to play for Los Angeles, I was told, and I’m paraphrasing, that there are hundreds of players that want to play for the Kings. That doesn’t mean they will. Still, even though the idea is a bit of a “pipe dream,” as it was framed on the conference call, Blake was asked to weigh in.

“I think a lot of teams would be excited about the opportunity to entertain John Tavares, for sure,” he said. “There’s still time before that period would even come, and then whether you’re one of the teams in on it. Definitely, it would be something you’d have to look at. I don’t think players of that caliber come around very often, and especially at that age.”

–Blake also answered a question on whether he’d be interested in offering a new contract to Slava Voynov and bringing him back to the team, should he gain the permission of the NHL to return to the league: “That’s, I think, a little premature,” he said. “I think what we’re reading in the papers and the steps that he has taken with the league and the appropriate action after that – right now he’s a suspended player, and until anything changes there, I don’t think we’re in a position to comment any further. A lot of this has to take place between him, his agent and the National Hockey League.”

–Even though there’s a difference between “pace” and “pure, unadulterated, hot-and-heavy speed,” ask any player who has accrued NHL tenure, and they’ll tell you that the game appears to be getting faster. The Kings, perhaps later than some other teams, are in the process of evolving alongside that league-wide trend, which begins with their scouting and drafting. (This began in earnest with L.A.’s draft last year, particularly in the second round.)

But that raises a question about the Washington Capitals, who are one of the few Eastern Conference teams that employ a heavier style of play. That play is still laced with some interesting skill, though, as Blake articulated when I asked him about their success.

“I think Washington had a rare combination of a lot of that – speed, skill and physicality,” he said. “You look at their top line, Ovechkin, Kuznetzov and Wilson, they all move, they all have skill, and they all finish, and they’re physical. They had a rare combination of a lot of those pieces. The speed and skill, obviously that’s where the league’s heading, and if you read the reports of the top players in the draft or the first couple round players, they all skate well. Very rarely are you going to have a below-average skater. There is that emphasis. I think the other element, and you saw it with Washington as the playoffs went on, they seemed to compete at a really high level. When you’re doing that with speed, skill and size, it becomes very effective.”

I followed up with a question on whether he thought Washington served as any sort of structural or game play model for the Kings. Blake acknowledged that there were some similarities – “You look at their middle with Kuznetzov and Backstrom, obviously,” he said before going into greater detail on the nuances of such a comparison.

“I thought Carlson was tremendous on their defense from an all-around aspect, not only defending, but on the offensive side. Their goaltending kind of took shape as the first round went on and got back to what they had relied on the past couple of years. I think a big difference on them was their scoring ability down the wings. When you have an Ovechkin on the wing that can beat you from a lot of different places – everyone knows he’s shooting, everyone knows where he’s shooting, but he still beats goalies. But, to me, the thing that stood out with him and throughout his line was their compete level. They were ready every game.”

–No Dominik Kubalik, Alexander Dergachyov or Nikolai Prokhorkin at development camp, per Blake. No surprises there. “They won’t be involved in that,” he said of the three forwards. “The development camp, the guys have had primary lists in order. There are some additive players after the players, whether they’re not drafted and you get them on your list to development camp. That part of it, we’ll take, sure. But some of those European players you’re talking about, the older ones, the ones drafted a few years ago, they will not be taking part.”

I’d inquired about Dergachyov (2015/3rd round) in late March and did not sense any impending resolution. Los Angeles had kept an ELC open for him, but there are also questions about the directions of the team (read: speed!) that become muddled given the complicated negotiations for a player who has agents based in both Russia and North America. The 6-foot-5, 220-pound forward totaled seven goals and 13 points in 36 KHL games last season and should get a better opportunity this time around with SKA, with whom he signed in early May. Dergachyov, who turns 22 in September, also suited up for Spartak Moscow in 2017-18.

Kubalik (2013/7th round) recently re-upped with Ambri-Piotta in Switzerland’s NLA, though he has an out clause after this season. This was covered earlier on LAKI. The to-be 23-year-old was excellent at the World Championship for the Czech Republic.

There’s still no resolution with Prokhorkin (2012/4th round), who turns 25 in September and looked awfully good at the Olympics. He’s had opportunities to return to North America but has not decided to do so; I’m not sure if anyone’s holding their breath on his availability at this point.

Rob Blake, on whether other teams’ trades and personnel decisions influence the Kings’ decisions:
I think we look at it. I’m not sure that you base a decision off of what other teams do. You might be able to look and say, ‘OK, this is what they’re planning to do and they don’t necessarily do it.” I think we look at our team, we first compare it to our division, and then we compare it to the west and then we compare it to the whole league. Based off of our conference, you start looking at other teams in the conference. Vegas was the best team in our conference, and we’ve got to find a way to beat ‘em, so yeah, you do look at the way they’re structured.

Blake, on the “climate” of trade talks and ways to improve the team:
You look at all different ways to improve your team, and that’s what all teams are doing. There are lots of discussions between teams the last couple of weeks. I think now, those discussions become narrowed down and they kind of sort through the teams that are most interested in the types of players, and you’re starting to see a few of the deals. But, yeah. We’re going to explore all different options, and I think pretty much everyone will say, ‘whatever we think can improve or help our team, we’re going to look at those options.’

Blake, on analytics, drafting and mining for personnel where other teams may not have caught up:
Yeah. I think we do look at different things like that. I talked before on the different avenues to acquire talent. You only have so many in the draft, and sometimes some of those picks are moved each year. You look at other teams, but you also have to have a trade partner, and to acquire a player, you’ve got to give something up. I think the other avenue is through the free agents. You have your NHL free agents on July 1, which command usually term and dollars, and then you have your other free agents in college, CHL overages or European pro. An emphasis on trying to find the search for talent and acquiring these players, that’s a whole combination of all that.