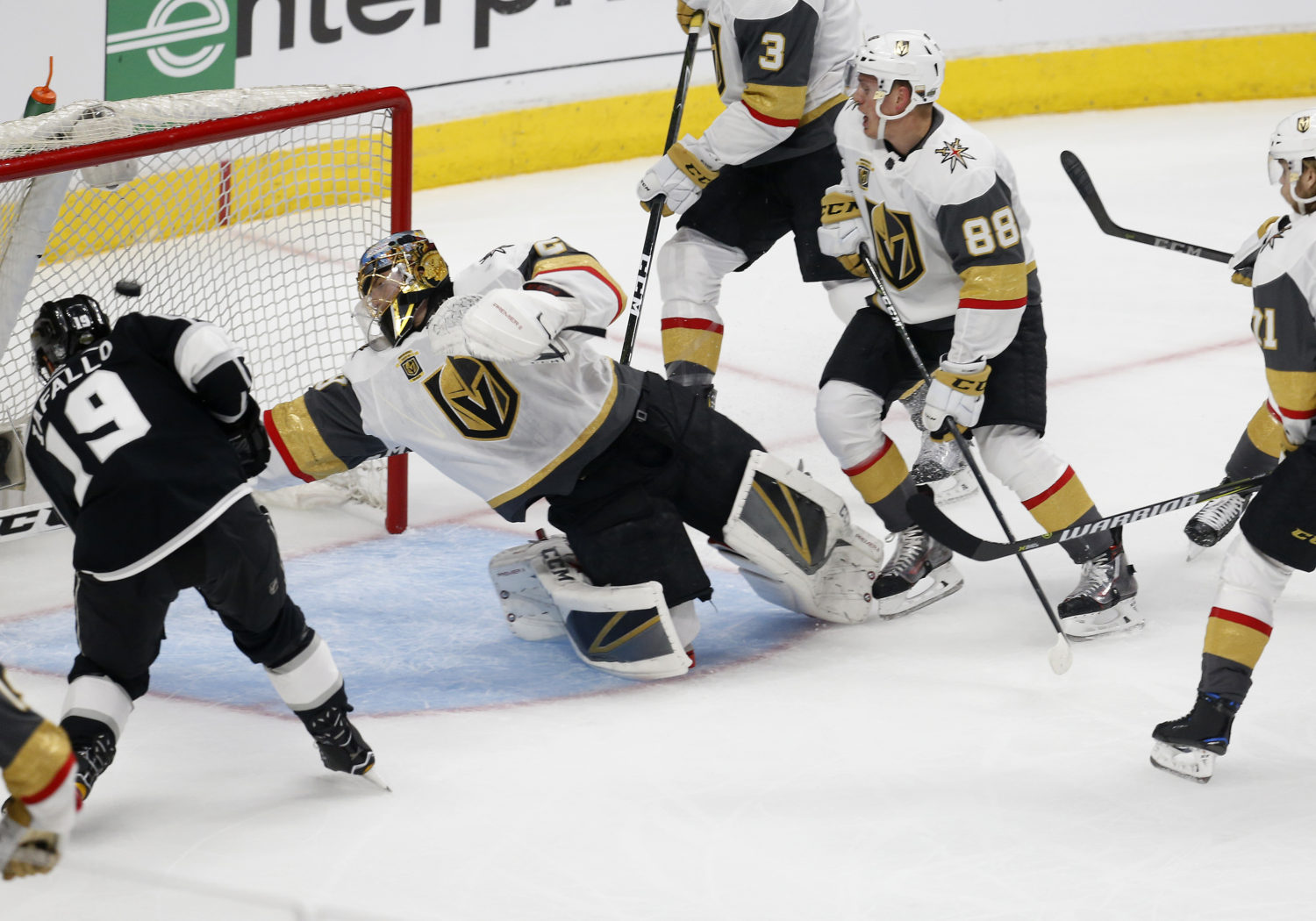 -No changes are projected.

–No changes for the visitors, either.

-Derek Forbort (lower-body) ain’t walking through those doors anytime soon. John Stevens: “He’s just progressing along with his rehab and therapy. He’s nowhere near the ice yet or anything, so we’re just going to get him … he’s got to get healthy before he gets back on the ice, and then once he gets back on the ice, you take it from there. But he’s nowhere near that yet.”

-Gerard Gallant, on what he expects from Kings, who are facing elimination: “They’re going to be great. … We’ve all been there in those situations before. They’re going to play their best game and they’re going to work hard, and they’ve got a lot of character and a lot of leaders on their team over there, also. I think we’ll see their best game, and I thought they played real well the other night. Every game’s been a one-goal game. It’s been great hockey.”

-Despite the 3-0 Vegas series lead, Adrian Kempe has been getting lots of notice for his hard, north-south game, forechecking, hitting, battling and ability to get in the grill of players during loose puck battles. Here’s linemate Trevor Lewis: “I think he’s one of our better forecheckers. It’s that speed, and he’s got a good stick, and he’s definitely not shy to have to hit, too. We’ve been getting our looks. I think it’s coming.”

-You may remember David Perron from such playoff series as 2012 St. Louis and 2013 St. Louis. Those Blues teams, according to Perron, “were all about going hit-for-hit, everything for everything,” in terms of physicality, and never beat a Los Angeles group that was a touch heavier, a touch more skilled, and received better goaltending. He’s faced a stiff challenge in his career against the Kings – something he acknowledges – and the fact that he’s a win away from advancing past them is something that does mean a lot to him.

-The Kings received 40 goals from defensemen this season, with Drew Doughty and Jake Muzzin setting career-highs with their offensive output. They’d been a top-five team in getting production from their defense all year. Paul LaDue and Oscar Fantenberg have more recently been involved in some offensive production, but have those looks, shots and scoring chances from the blue line been there consistently in this series?

“I would say ‘no,’” Stevens said. “Vegas is a team that plays really aggressive on your points. There are some things that we looked at to try and free up those guys a little bit, but I do think we can do things quicker where there’s a shot off a pass or using our feet to expose lanes to get pucks to the net. We looked at all that stuff at this point of the series, and the shot totals from our defense is very similar to theirs, but we think there are guys that can create more opportunities from getting more pucks to the net, but you can give them some credit. They’re probably more aggressive on the top than any team we’ve played this year, and I just think we have to do things a little quicker – and that’s just from the blue line. I think our power play is getting more of a shot mindset, but I think in our o-zone play that’s been a big part of our team. We were one of the top five teams in production from our back end, but when you’ve only scored three goals in a series to this point, there’s not a lot of production to build on. The rush part of the game – I think we’ve been fine there. I think we can do more on the offensive blue line to get more pucks to the net.”

Of course, while the team could certainly benefit from regular defensive scoring, they’ve only accounted for three goals in three games, and the offensive need is universal and not confined to any one position.

“I think we need our forwards to score a little more than [the defense],” Doughty said. “We’re obviously trying to chip in from the back end, and a lot of the goals have generated from us at the back. We need to continue to keep trying to do that and put more pucks in, but it’s scoring as a team, not just on the back end.”

Doughty sees that the low-to-high exchanges between the forwards and the defensemen “can be there more.”

“It’s definitely open,” he said. “They collapse really low, and we need to use it more. We haven’t been using it enough. But rather than pulling up on the rush or climbing high in the O-zone, we’re throwing pucks at the net instead of using the low-to-high play, which I think we could use a lot more, and that might help us some more good opportunities.”

Drew Doughty, on the mood of the team this morning:
It was fine. Just try to stay loose. Just ready to get going. There’s no added pressure. We’ve just got to win a hockey game here. That’s what we’ve been trying to do for the last three games. Just got to win one game, and that’s all we’re looking to do tonight. Obviously, it’s a do-or-die situation, but we’re just looking at winning one hockey game.

Trevor Lewis, on whether more can be done offensively, or if Marc-Andre Fleury has been excellent:
He’s been good, but I think we can do a better job of taking his eyes away and obviously getting those second and third chances. When he’s kind of laying down, we need to bear down on those. We can do a better job of generating some more of those.

Lewis, on skating with Adrian Kempe:
He’s great. He’s so effortless in his skating. Sometimes you just give him in the middle, and he creates so much on this speed. Obviously, this playoff series, he stepped up his emotional level, and I thought he’s been a real key guy for us.