Waking up with the Kings: April 12 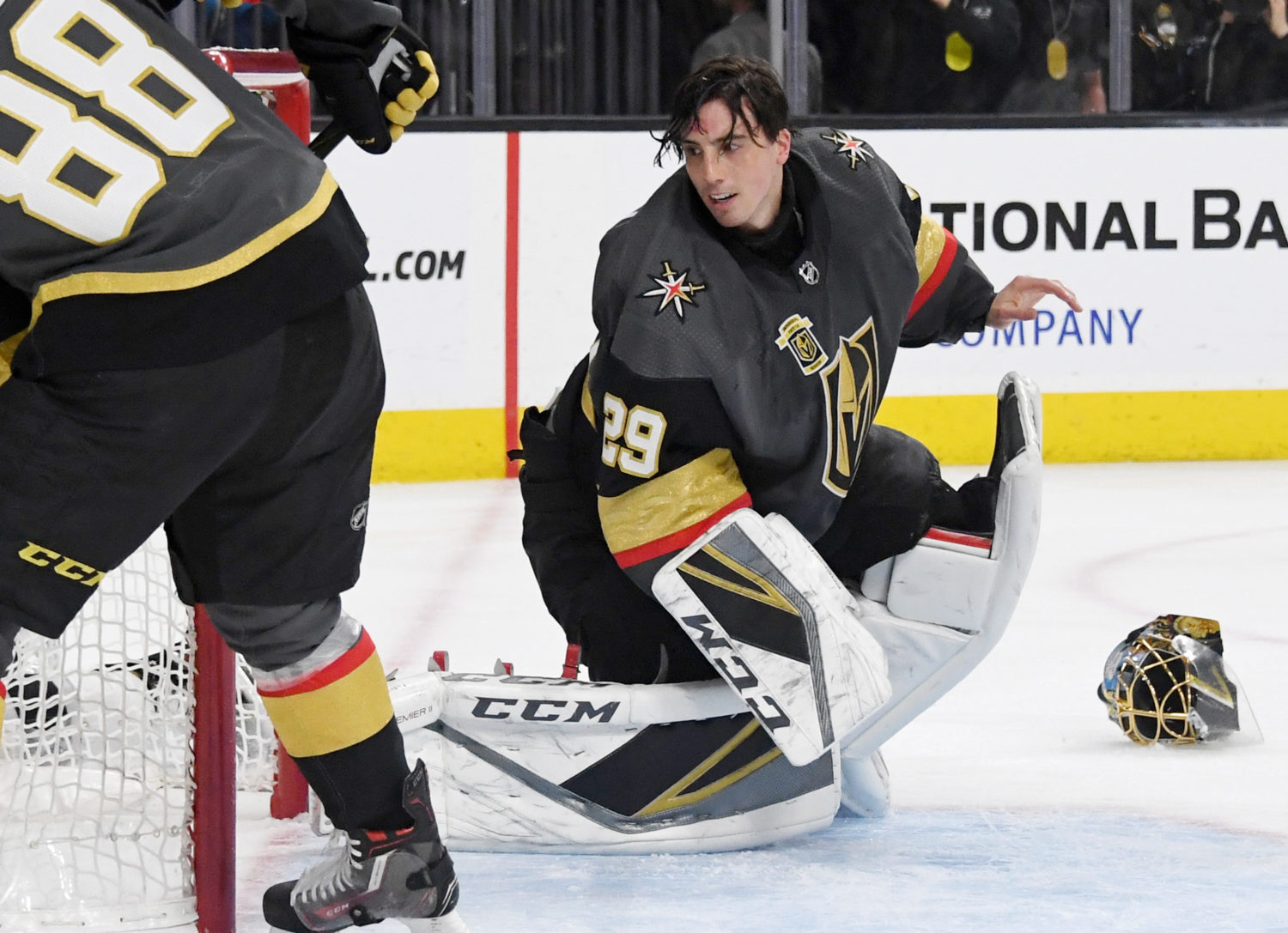 Wednesday night represented a missed opportunity for the LA Kings. They weren’t the better team in Game 1, nor did they finish with the greater count in scoring chances. Their execution was a touch off, they struggled through stretches to leave the zone amidst the Golden Knights’ relentless up-ice pressure, and over the final 10-to-15 minutes of the game, weren’t helped by Vegas’ three or four players back on the blue line. But that was a road game for the taking, and who here hasn’t seen the Kings win this type of game dozens of times? Give up a first period goal, make adjustments, tie the game, win the game. Jonathan Quick needed to have a big, big night in net to keep them in it, but that’s what he does, and as everything settled down after the oppressive home energy at the outset, Los Angeles had their chances, limited the number of Vegas odd-man rushes and did a good job establishing their own fingerprints on the game. This wasn’t a breakneck, chance-trading, high-grade opportunity game played off the rush. It was a hard, tried-and-true, Los Angeles Kings-style playoff game with a combined 127 hits (or so they say) and a depressed number of Grade-A opportunities from the traditional number the Golden Knights generate. And they, too, deserve credit for adapting their own brand of play to playoff hockey and initiating so much of the heaviness. Vegas won a game played in the style L.A. had built an empire on. 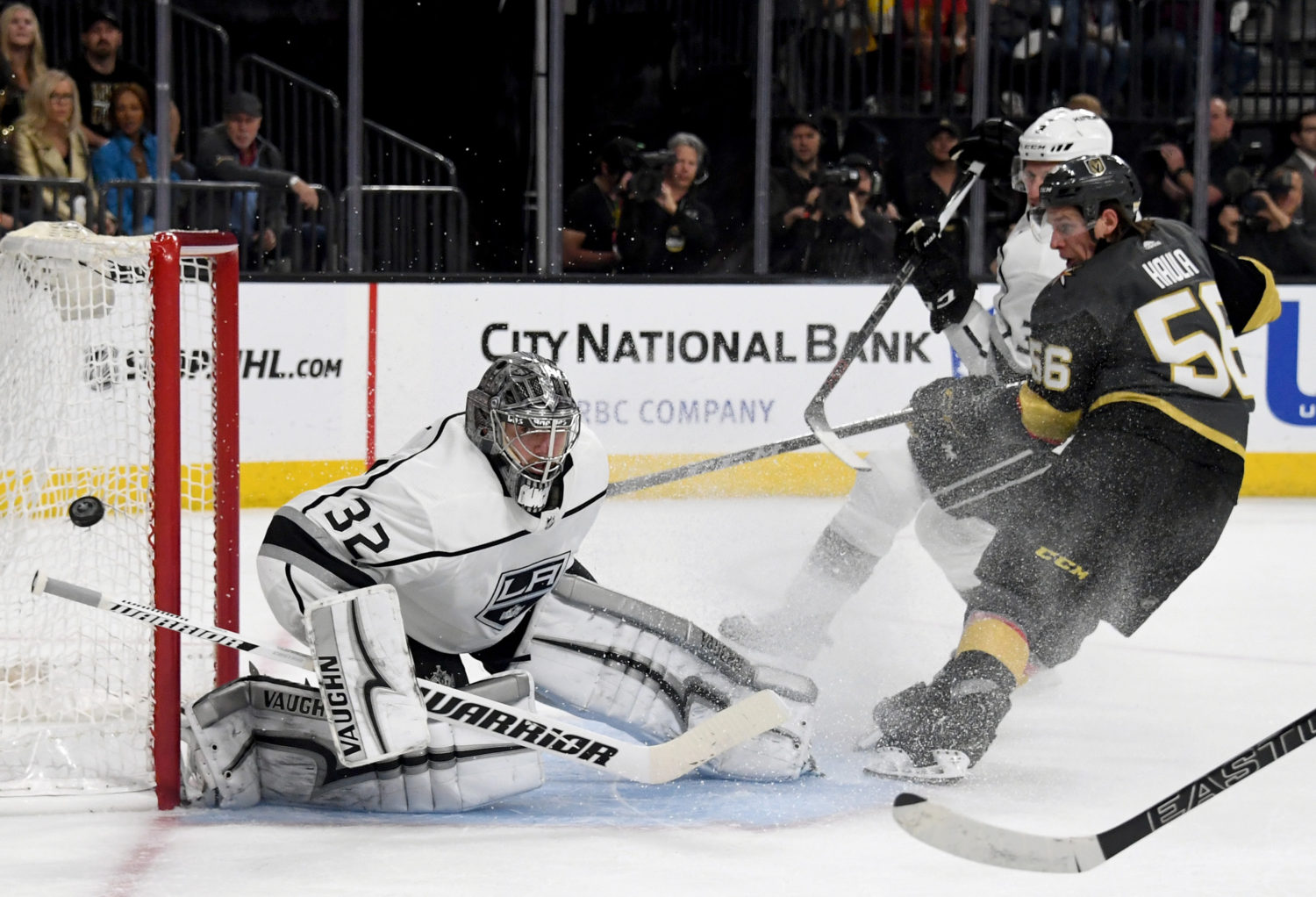 Los Angeles’ finishing was off in the 1-0 defeat. Water is wet. But despite the improvements the Kings made in generating opportunities as the minutes elapsed, they never benefited from any convergence of pucks and bodies at the net. (In fact, Vegas benefited from this on Dustin Brown’s borderline goaltender interference call.) During five-on-five play, the second chances, screened goaltenders, traffic and grease was practically non-existent, and that limited the number of second and third opportunities and put a cap on the Kings’ zone time. The one goal in the game was a deflection in which Pierre Edouard Bellemare got his stick on a puck after Tomas Nosek’s low-to-high play to Shea Theodore. (How has this goal not yet been changed?) With greater zone time, and more cycling efforts, the Kings will have the ability to cash in on a greater number of low-to-high plays, as they had done for much of a season in which their defensemen recorded the most points as an L.A. unit (189) since 2000-01. 29.6% of the team’s total points came from defensemen in the regular season, so without the regular presence in front of a future Hall-of-Fame goalie like Marc-Andre Fleury, they’ll struggle to take advantage of one of the aspects of their game that they’d banked on during the regular season. As for the Golden Knights, their depth was illuminated in the win. You can talk about William Karlsson, about Erik Haula and James Neal and the mostly accurate league-wide observation that they essentially roll three second lines, but their goal was scored on a simple play in which the fourth line went low-to-high, got to the front of the net and benefited from a deflection. 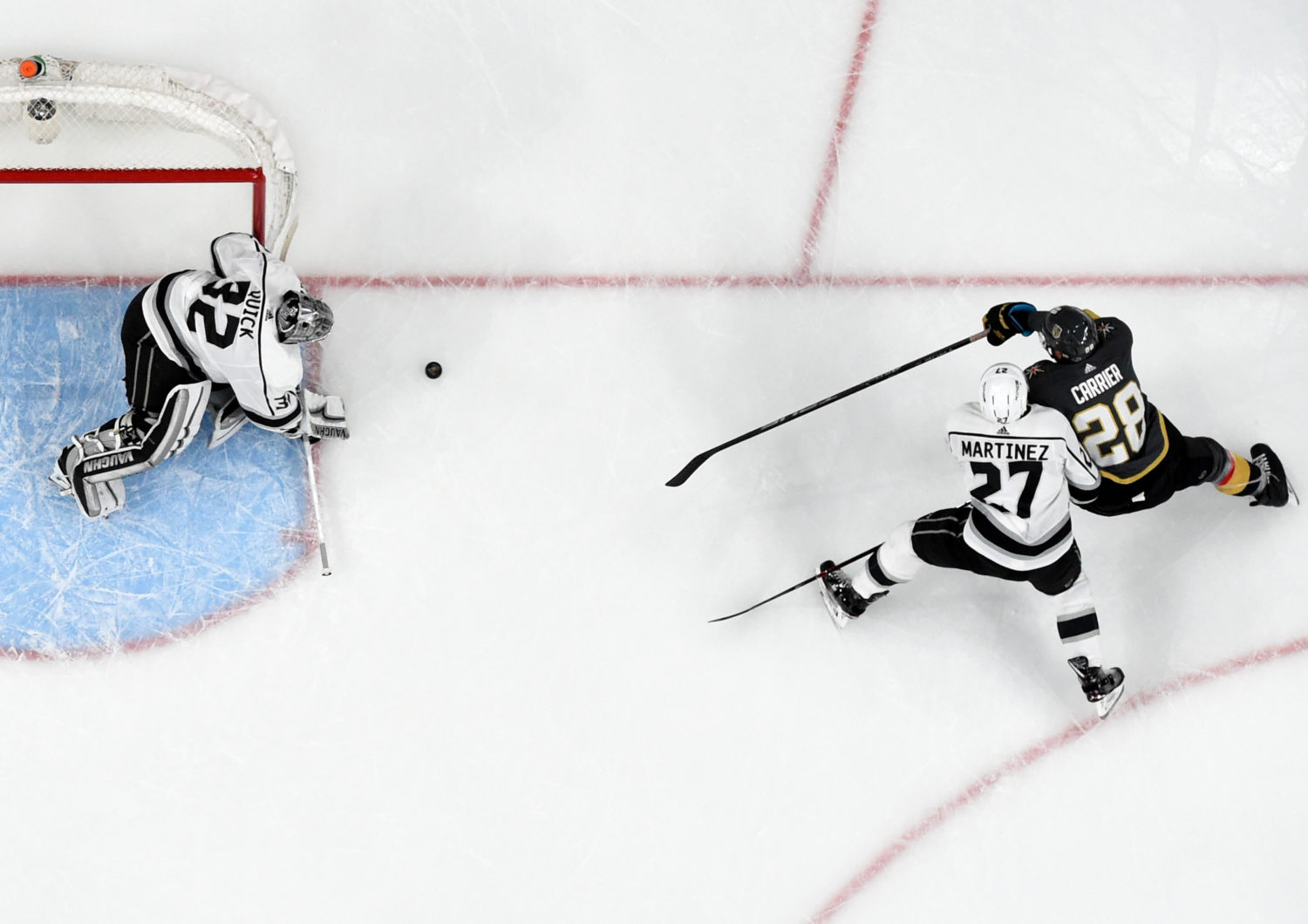 Not a good spot to be in one game into the playoffs and with key absences on defense: the Kings are in Drew Doughty Watch as the result of his hit that grazed William Carrier’s shoulder and also made contact with the forward’s head. The hit placed within the context of the game doesn’t help Los Angeles, as Carrier, in his limited action, finished with 10 hits and ably imparted his thorny skill set into his team’s efforts. In a wider context, it’s hard to look at the hit without suffering from a case of revived Whataboutism, and that doesn’t help. Kings fans are hoping that later today they won’t have to angrily type “But what about Dave Bolland’s heat seeking missile to Mike Richards’ head?” or “How did Duncan Keith only get one game?” after weighing whatever verdict may come. 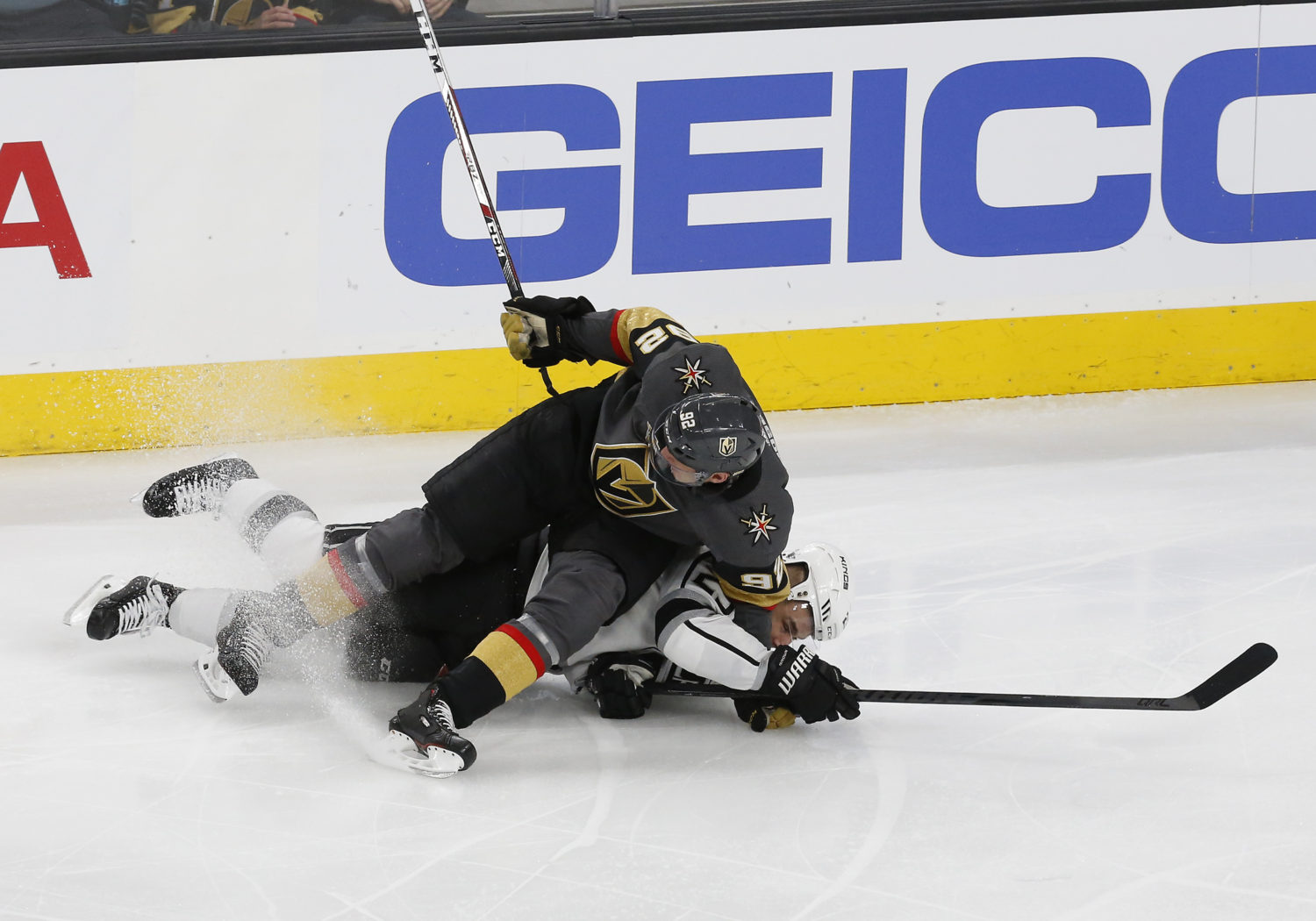 Even without Jake Muzzin and Derek Forbort in the lineup, there were positive returns from a personnel group that was more green than your traditional Kings playoff outfits. Adrian Kempe – nicknamed “Juice” because of the juice he brought to Manchester’s 2015 Calder Cup run – was right at home in his first playoff game. Apart from Anze Kopitar, he may have been the best Kings forward on the ice and made the most of his nearly 13 minutes. There’s so much more jam to his game than would probably be associated with a 21-year-old rookie with game-breaking speed. Watching him battle in the corners and throw a well-placed arm or shoulder into his counterpart’s ribs leaves the impression that he’s going to be right at home playing playoff hockey over the course of what should be an extended NHL career. Oscar Fantenberg improved as the game progressed and served notice that should Jake Muzzin need an additional game (or games), he’s a sturdy understudy capable of raising his battle element. After a minor gaffe or two early, he raised his game and was on the ice in the final minute and the Kings down a goal. Still, there are significant holes in this Los Angeles lineup, and while Forbort is all but ruled out of this series, Muzzin’s presence was acutely missed. He’d have been right at home in such a firm, heavy game, and given that the Kings’ power plays grew more dangerous as the game elapsed, it wouldn’t have been out of the question to think he’d have made his mark on special teams, as well. 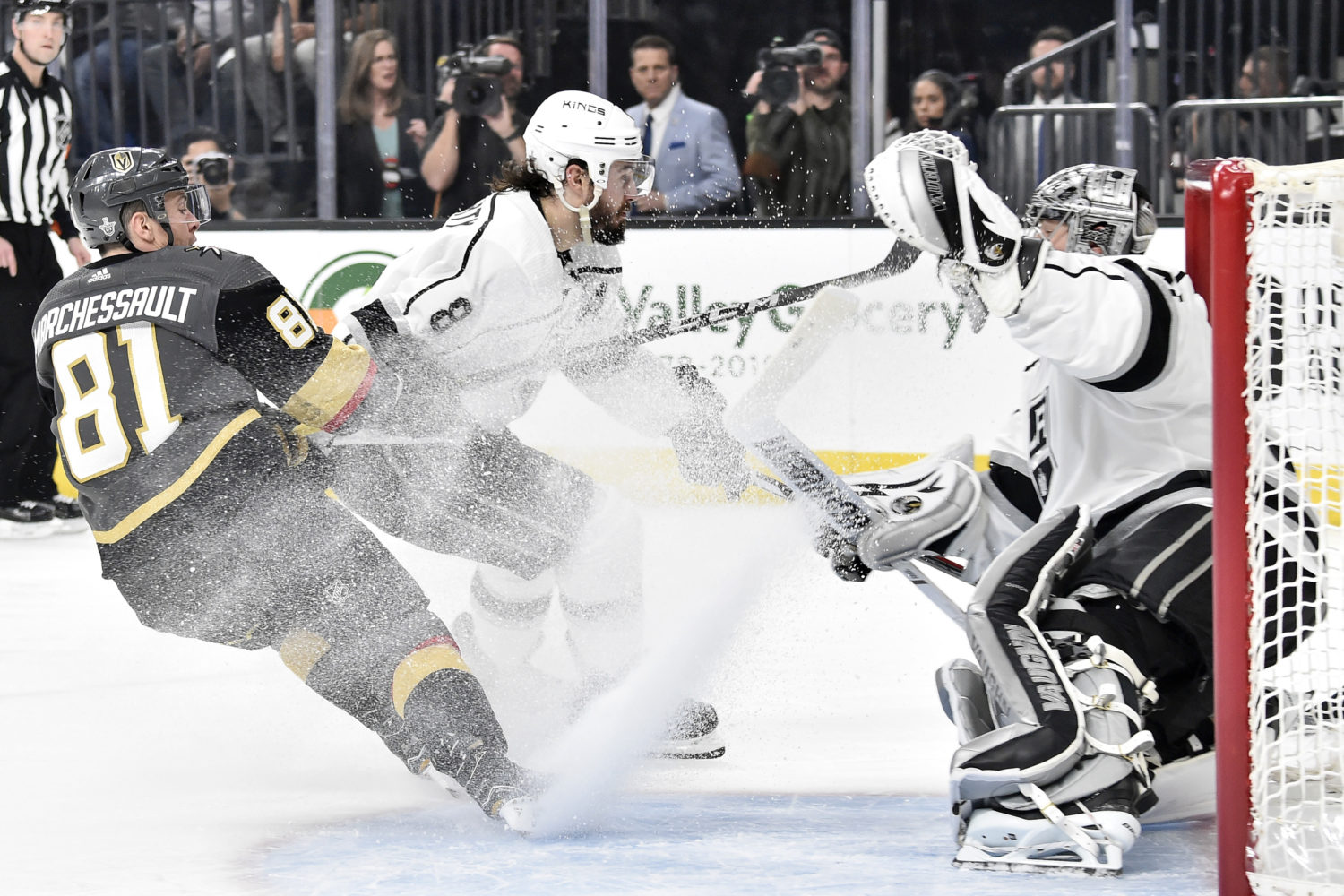