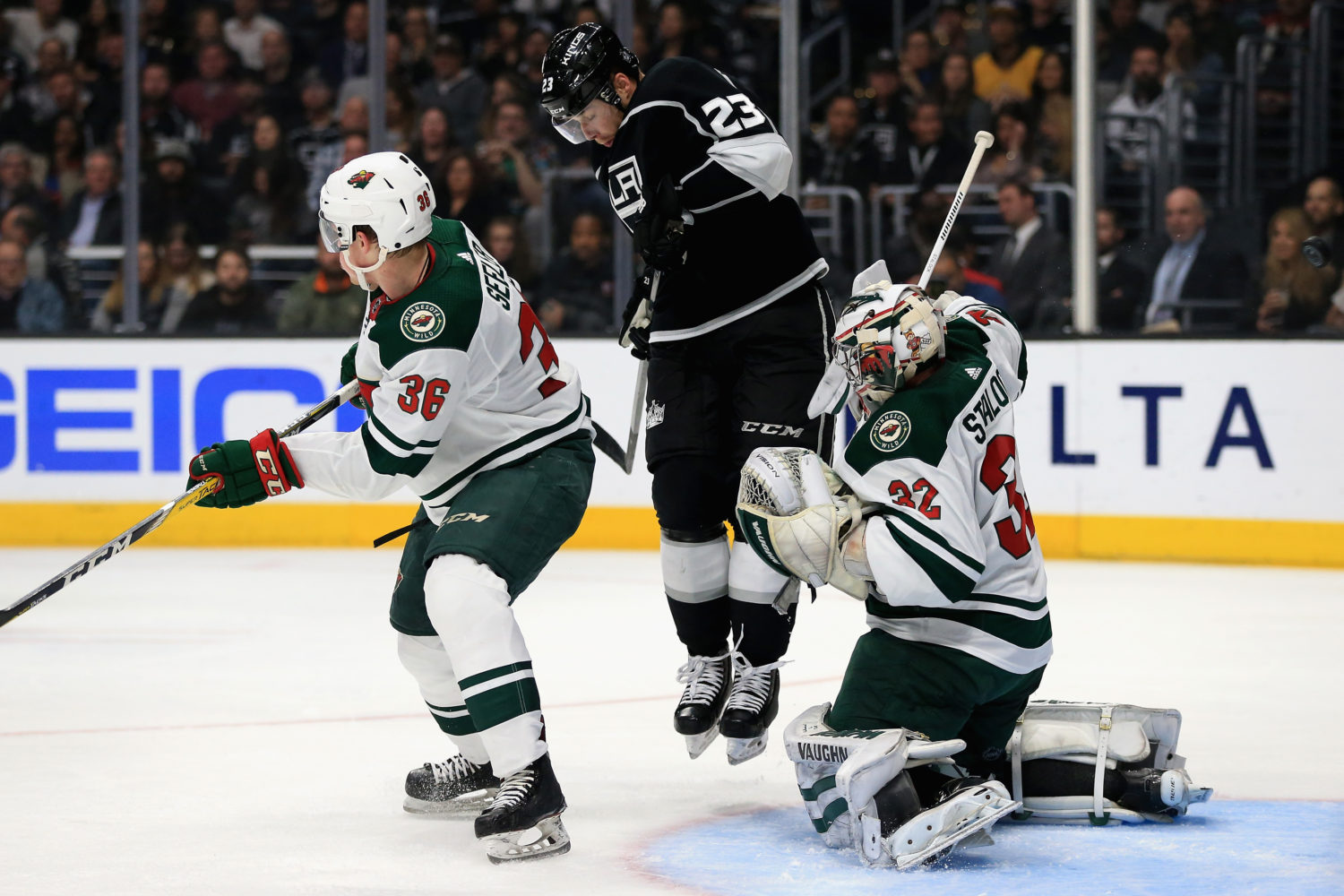 On emerging with a 5-4 overtime win:
Well, we weren’t too happy with the first period. We thought we just lacked a little pace and urgency in our game. I thought they really changed the flow of the game in the second period, and obviously we had a really big second period, and then we let them back in the game with some self-inflicted wounds there. A lot special teams tonight – the late penalty was the third goal, and then a shorthanded goal the fourth goal. It certainly wasn’t a poetic game by any means where it flowed from start to finish, but at the end of the day, it was a good two points, and I thought the guys played hard. We got obviously a big performance from our leadership group again. We want to try and build as much momentum as we can going into the playoffs so it was nice to see us come back and get the two points.

On Dustin Brown’s four goals, and his importance to the team down the stretch:
He’s been terrific. He and Kopi have really led the charge up front, and Carts. You look at our veteran guys – I’ve said that, not just because he had four goals. I mean, that’s as good as Brownie’s played in a long time. What I loved about the last goal was he did it from checking. He got in there and knocked the guy off the puck like we’ve seen him do so many times when he got himself open, and the guys on the ice made a great play. He’s been tremendous. His leadership’s been tremendous, his production’s been tremendous, he’s played big minutes in all situations, so he’s been a valuable guy for us.

On Brown not being happy with the third period miscues:
Yeah, we got a little bit sloppy there. It’s probably my fault a little bit. I was going to call a time out there and get those guys ready. We still had enough time on the clock, but yeah, you’re right. They’re down in the hockey game, they’re going to take some risks. I think we lacked a little bit of urgency on that power play and let them back in the game. Special teams are going to be important. Shorthanded goals in the playoffs can kill you, and Brownie’s right. He’s bang-on. The margin for error during the regular season is small. It’s even smaller in the playoffs. If we want to keep playing, we’re going to have to clean some of that stuff up.

On his plan for the final game of the regular season:
We’re trying to win a hockey game. There might be some personnel decisions based on getting people ready for the playoffs, but we’re going to go in there and try and win that game. It’s still an important game for us, as it turns out. You think everything’s settled and locked into place before the end of the 82nd game, and it’s not. It’s probably going to be determined by that game against Dallas, so we’re going in and looking to win that hockey game.

On Torrey Mitchell and Paul LaDue getting hit with illness:
Yeah, there were a few guys that weren’t feeling quite great today, so he was one of ‘em. Obviously [inaudible] player, we would’ve played him, and LaDue was the same thing. We’re fortunate we had the Brickley boy here who came in and got into a game, which was great, and we brought in Fantenberg just to make sure he was good to go after warm-ups. This time of the year, lots of travel. We’ve been all over the place here. Just want to make sure we get this cleaned up before we get into the heavy lifting in the playoffs.

On his first impression of Daniel Brickley in an NHL game:
It’s good. It’s a tough situation to come into. I’ve seen him play on tape, so I had a pretty good book on him in terms of what he can do. He’s got really good poise with the puck. I think he’s got some escapability with the puck – I think you saw that. He’ll tell you it’s a really good reference point for him to get into the league at this time of the year. He’s a big kid, but guys are big in this league, and they’ve got some big forwards, so it’s a lot different than college. But he came in and played with confidence. I think the strength of his game is going to be the composure he has when he has the puck, and the rest of that stuff, we can teach him.

On whether he could “imagine” that Brown would have this type of a season:
Yes. Absolutely. I met with Brownie in the summer and said that there’s no reason why, and we went through his role and his situations last year, and he was actually a guy who created a lot of opportunity. I thought his game was trending in the right direction last year, and I said if you’re not at least a 20-goal scorer again, then I don’t know what I’m doing, and he kind of laughed. But you could see he believes, too, and he is. He and Kopi have been great before. They’ve been together most of the year this year, and I think that’s what he is.

On being the frontrunner for the Jennings Trophy:
Well, I’ll tell you what, I think everybody in this organization takes great pride at keeping the puck out of your net, and I think a lot of times you want to talk about defense, sometimes it’s a willingness and not an ability, and our guys are willing to do what it takes to keep the puck out of the net. Our best offensive players are our best defensive players. We’ve gotten great performances in the net from Jonny, Darce and Soupy, but I’ve always been a big believer in that. I think your team should be able to win on the road, which we have, and I think your team should be committed to keeping the puck out of your net, which we have. It means a lot, just because it shows the commitment of your hockey team.