Even as offense has increased, Kings are again Jennings Trophy frontrunners 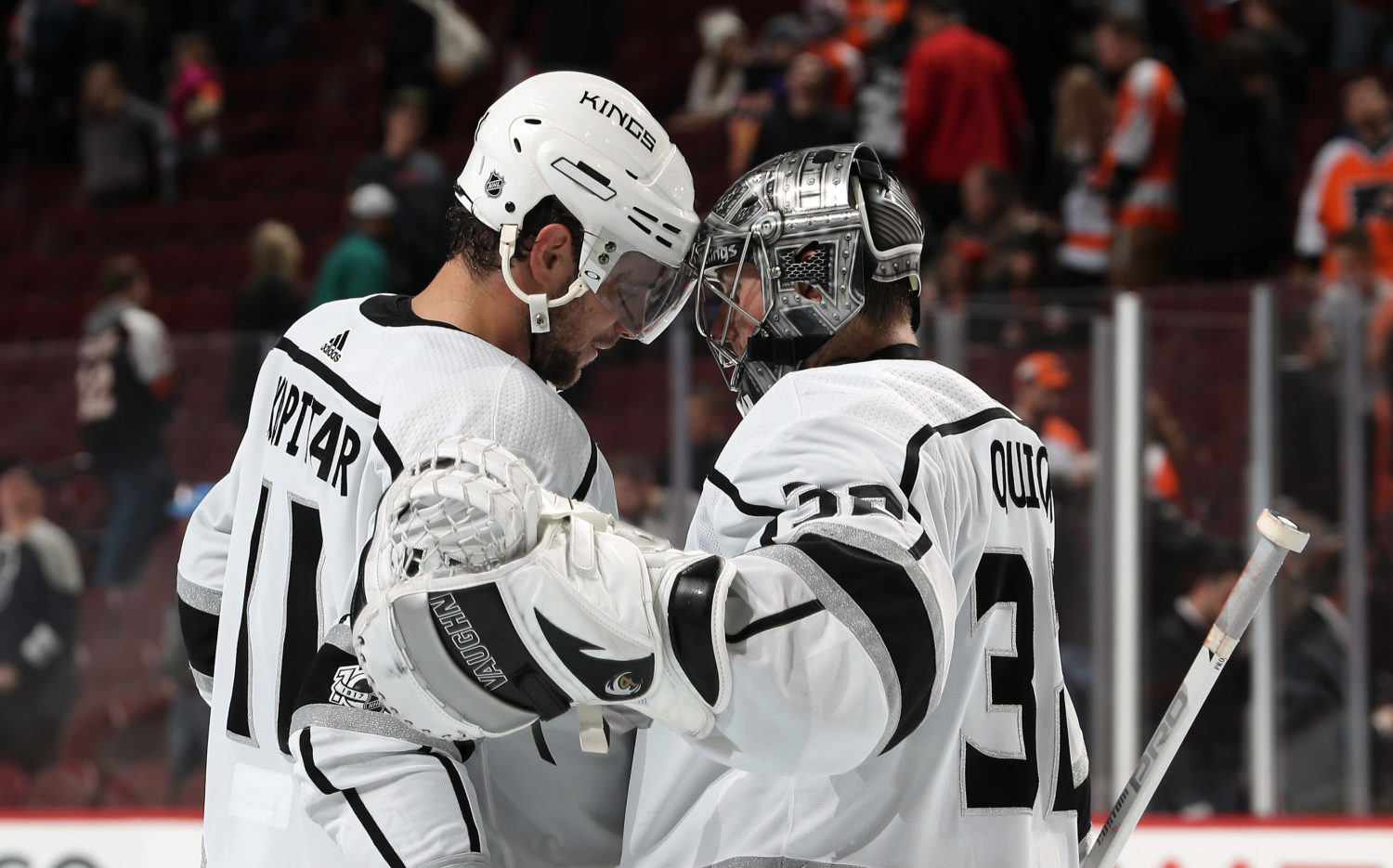 It’s not on the forefront of their minds because of the importance of the game tonight against the Colorado Avalanche, but Jonathan Quick and the LA Kings are likely on their way to claiming the second William M. Jennings Trophy in club history.

The Jennings is an official league award presented annually to the goalkeeper(s) who’ve played a minimum of 25 games for the team that allows the fewest goals against in regular season play. The award would be presented to Quick, as it was four years ago.

This is shaping up as an impressive feat that represents that Los Angeles maintained its long-established identity while increasing the offensive output, which was a significant goal at the start of the season. The Kings’ goals-for per game has increased .43, while their goals-against per game has dropped by .01, even as offenses and power plays have produced more scoring league-wide.

“It’s kind of been our identity for a long time,” Quick told LA Kings Insider on Sunday. “We try to defend well in our own end. Our forwards take pride in helping out, and I think we’ve obviously done it well for a long time. Even though we kind of mixed a few things up to get some more chances offensively, we still always have it in the back of our head how we have to play in our own end.”

Quick and Los Angeles previously won the Jennings in 2013-14, a season in which they allowed 174 goals. The success this season stems from a concert of ownership of team culture, from top players such as Quick, Drew Doughty, Jeff Carter, Dustin Brown and Anze Kopitar – perhaps the Selke Trophy favorite – as well as from the bent of a coaching staff that includes John Stevens, Dave Lowry and Bill Ranford, who have experienced success in maintaining the overall team game while working with an established penalty killing group currently tied for the league lead with an 85.1% success rate and has killed off 31 of the last 32 power plays, including 20 straight. 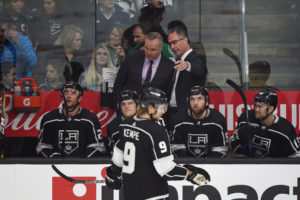 “This year we have quite a few new members of our staff,” said Stevens, who ran the team’s power play for the previous seven years before becoming Head Coach and ceding much of the control to Lowry. “They had some fresh ideas, but I think we all agreed that there’s a philosophy of playing the game the right way, and the thing we’re fortunate as coaches, we have players like Kopi and Brownie and Drew and Jeff and Muzz and Marty that have been here before, that you can take your best offensive players and use them as examples on how to play the game the right way and being in really good defensive position to create offense from. A lot of talk at the start of the year, you want to get better offensively, well, you need the puck to be able to do anything offensively, and I think our guys have done a good job with that, but again, the success of this team over the last eight or nine years has come from the commitment under their top guys to play the game the right way without the puck, and now it becomes an easier sell for new players and young players coming to your organization.”

Stevens, his staff and the players deserve credit for increasing the club’s offensive output while maintaining their identity amidst the stem off offensive growth across the league. 17 teams currently have power plays that operate above 20%; Los Angeles, under Stevens and Don Nachbaur, has improved nearly two full points and ranks 13th at 21.0%. Last season, 11 teams operated at 20% or better. In 2015-16, there were eight. There were seven in 2014-15 and three in 2013-14.

“I think it’s just a part of our culture,” Doughty said before echoing much of what Stevens had said. “When the young guys see our older guys do the job, they realize they have to do the exact same thing. They can’t let it slip away. They have to do exactly what myself or Kopi are doing. It’s just in the culture now, and obviously John reinforces things in video, but I think it’s just imprinted in our minds.”

Culture is an intangible that is hard to measure but is certainly present. While there has been a touch more freedom in the offensive zone that has allowed players like Kopitar and Brown to post standout numbers, it has been the reinforcement of the identity of the club – again, a nebulous endeavor that doesn’t necessarily come with a tabulation of quarks or neutrinos – that has allowed for the continued defensive success, even as the offensive numbers and power play success has grown.

Again, tonight’s game against Colorado is the more important than not-yet-earned postseason accolades. But the Jennings is a team award, and one that does a good job of representing what the Kings had shaped under Terry Murray and Darryl Sutter and has been maintained by Stevens and a committed group.

“One of the biggest parts of the game, you’re trying to score more than them, give up less than them. I don’t think it’s anything more than that,” Quick said. “We’re just trying as a team to keep the puck out of the net, and it gives us a better chance of winning.”

John Stevens, on maintaining success defensively through efforts of between the players and staff:
I think any part of your game, when it comes to the power play and penalty kill, I think our special teams have been really good, especially the second half of the year. When we looked at hiring coaches, we sat down and went through all of that. I have a very strong vision of how I want to kill penalties. I always have. Our guys have had a lot of success here killing penalties, and that was a responsibility in terms of preparation that was going to fall on Dave’s lap, because it was something I took care of before. We saw the game very, very similarly, if not identically, in terms of what was important, the detail that was involved, and the fact that the goalie needs to be a part of the preparation. We’ve always made sure here that we have a plan in place, a lot of detail in everything that we’re doing, good awareness on the other team but really focus on what we need to do well and make sure the goalie’s a part of it.

Drew Doughty, on maintaining defensive statistics while increasing offense:
Our goal obviously was not to let the defensive side of our system slip away. We didn’t do that. We did a great job thus far, and obviously a lot of that has to do with the goalies, but the whole thing is just the way the team plays. Obviously, Quickie’s one of the best goalies in the league, but even when our back-ups come in, they’re winning games all the time, too. That’s how well they’re playing, but at the same time it’s how well the guys are playing in front of them. Now, not only just our defense, but our forwards are playing good defense and doing all the little things that make it count when it comes to goals against. 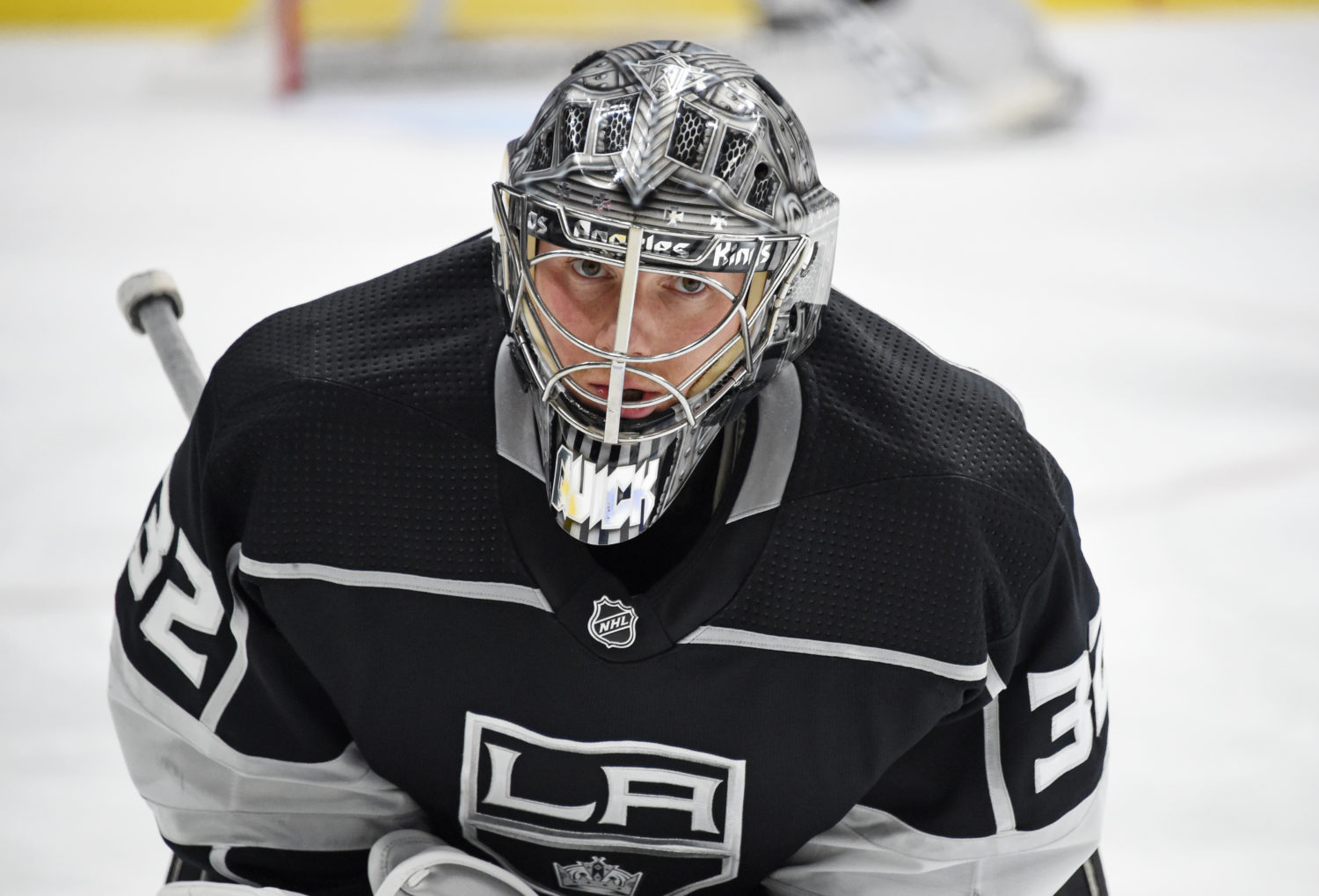