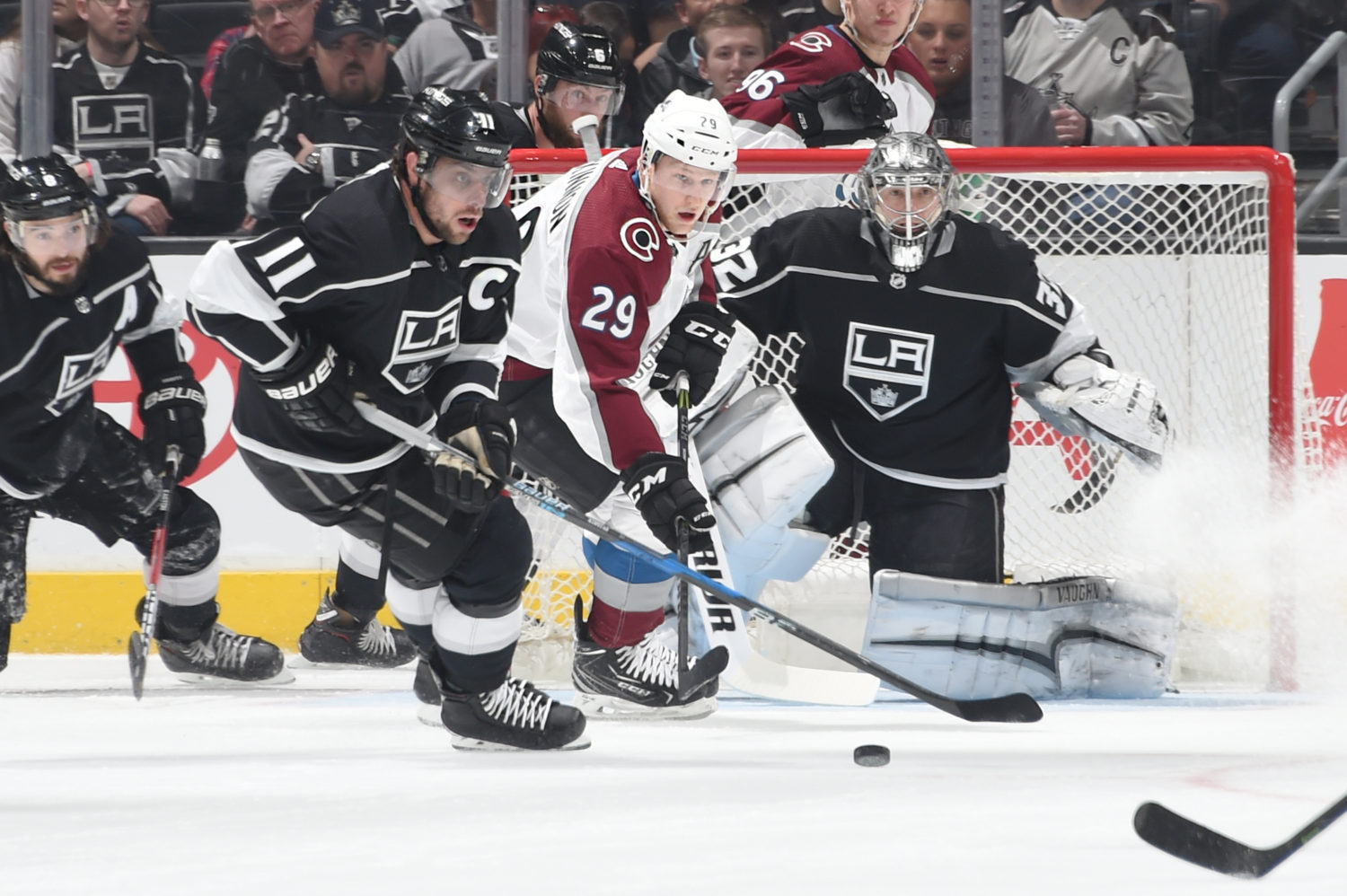 -The vitals: Jonathan Quick left the ice first at the morning skate and is expected to start in goal. He’s 15-5-1 in 22 career games against Colorado with a 2.21 goals-against average, a .914 save percentage and two shutouts. Andy Andreoff, Sheldon Rempal, Kevin Gravel and Daniel Brickley remained on the ice for work with Jack Campbell and are not expected to be in tonight’s lineup. Los Angeles has won four straight against Colorado, outscoring the Avs 16-3 over that stretch, and will be looking to sweep the season series for the first time since 2014-15, when they went 3-0-0.

-Their vitals: Jonathan Bernier is expected to make the start on the second night of the back-to-back set. He’s started both games of a back-to-back twice this season and is 0-2-0 in the second game with a 3.04 goals-against average and a .910 save percentage. It has absolutely no bearing on tonight’s game, but do you remember when Jonathan Quick’s play was spotty in the immediate aftermath of the work stoppage, in his first handful of games after his off-season back surgery? You remember those two or three weeks of #StartBernier? Well, Bernier started both ends of a back-to-back over that span, winning 5-1 over Nashville in the first game – Jeff Carter’s hat trick on hat night – before he allowed three goals in 21:14 on the second night and Jonathan Quick came in to earn the win as the Kings scored four goals in the third period to erase a two-goal deficit and win, 6-4, in a wildly entertaining game. In the first period, Colin Fraser fought Barret Jackman, Kyle Clifford fought Roman Polak and Dwight King fought Ryan Reaves. This is an unnecessarily roundabout way of saying that Bernier is 2-3-0 in his career against Los Angeles with a 2.44 goals-against average, a .902 save percentage and one shutout in seven games. Defenseman Erik Johnson is out for six weeks with a fractured patella and goalie Semyon Varlamov will miss the rest of the regular season with a knee injury. Forward Colin Wilson is dealing with a lower-body injury, while defenseman Mark Barberio is also nursing a lower-body injury.

-Both Jake Muzzin (upper-body) and Alex Iafallo (upper-body) skated after practice. This was the second straight day Muzzin skated, and the first time Iafallo was seen getting on the ice late in the team’s skate. Neither will play tonight. Said John Stevens: “I haven’t got an update from the trainer yet, but neither one was with us [at the morning skate] today. Continue to push ‘em along and see where they’re at. We’ve got a couple days here to regroup. Alex, we’re hoping he can get back with us really soon, and then Muzz, we’ll see.”

-Happy trails to Henrik and Daniel Sedin, the most engrossing power play performers of their generation, and two of the most gifted offensive players this millennium. The twins announced their retirement upon the conclusion of the season in a letter to Canucks fans earlier today:

We started the year with the mindset that a decision would be made in the postseason. But it became clear, after discussions with our families throughout the year, that this will be our last season. This feels right for all of us.

The two players embody the class and grace inherent in so many NHL greats. Some who recall the power play explosiveness from the 2010 playoff series may disagree, but we are all enriched from having been able to so frequently watch two players who exhibited skill and precision during an era that was essentially the antithesis to the 1980’s Smythe Division.

-To the next era: Gabriel Vilardi was named the OHL’s Player of the Week. What have you done recently? Probably not as much as Vilardi, who totaled five goals and 10 points in three games while eliminating the North Bay Battalion to set up a second round series with the Barrie Colts.

From the OHL’s release:

Vilardi recorded a trio of multi-point performances last week featuring an historic triple overtime goal to lead the Frontenacs to a 4-1 first round series victory over the North Bay Battalion. With the series tied 1-1 heading into Tuesday’s Game 3 in North Bay, Vilardi scored twice including the game-winner and added an assist for second star honours in the 4-1 win. He continued his strong play in Thursday’s Game 4 triumph scoring once with two assists as third star of the 6-3 decision. The hometown hero saved his best for last in Saturday’s Game 5 finale delivering four points including the game’s first goal at 1:44 and last goal at 114:05 ending the third longest battle in OHL playoff history where he was awarded first star praise in the 6-5 home ice celebration.

Meanwhile, Kale Clague and Moose Jaw dropped Game 6 at the cozy Art Hauser Centre, setting up a winner-take-all, one-versus-eight Tuesday night match-up in the Western Hockey League’s Eastern Conference. Clague had one assist in the Game 6 defeat. Later tonight, Jaret Anderson-Dolan and Spokane will host Cole Kehler and Portland while looking to extend the first round series to a seventh game.

-Tonight’s officials are referees Kevin Pollock and Jean Hebert and linesmen Brad Kovachik and Ryan Gibbons. Pia Toscano’s got the national anthem. Big, big game tonight, Insiders. Enjoy these Drew Doughty and Tyler Toffoli quotes, and have a pleasant evening at home, at Staples Center, or elsewhere WHAT REASON WOULD YOU HAVE TO BE ANYWHERE OTHER THAN HOME OR STAPLES THIS IS A HUGE GAME ANSWER ME.

Drew Doughty, on keys towards facing the Colorado Avalanche’s top line:
Shut down that line. They’ve got a lot of other good young players and mobile defensemen. Don’t give them the rush game, make ‘em defend and make ‘em chip pucks in and try to get the breakouts going.

Doughty, on what worked well against the top line in the 7-1 win at Pepsi Center:
They still had their chances. They’re good players, they’re going to get their chances. But when you start scoring goals, their determination obviously slows down when the game starts getting out of hand. So, that’s what we’ve got to do again, is try and get the early lead and take ‘em out of the game in the first period.

Toffoli, on aspects of the team’s game that he’d like to see working well in the coming week:
I think just playing solid games. We have our game plan going in, and we’ve just got to execute. If we do that and we all play good games, we’re going to be in a good position.

Toffoli, on being conscious of getting to hard areas directly in front of Jonathan Bernier:
I think we just have to do a job of getting there, and sometimes when games slip, that’s usually one of the things that you lose in your game. You’ve just got to keep going to the net. You watch the videos, and you see if you have scoring chances or not, and it usually comes down to getting into those positions. 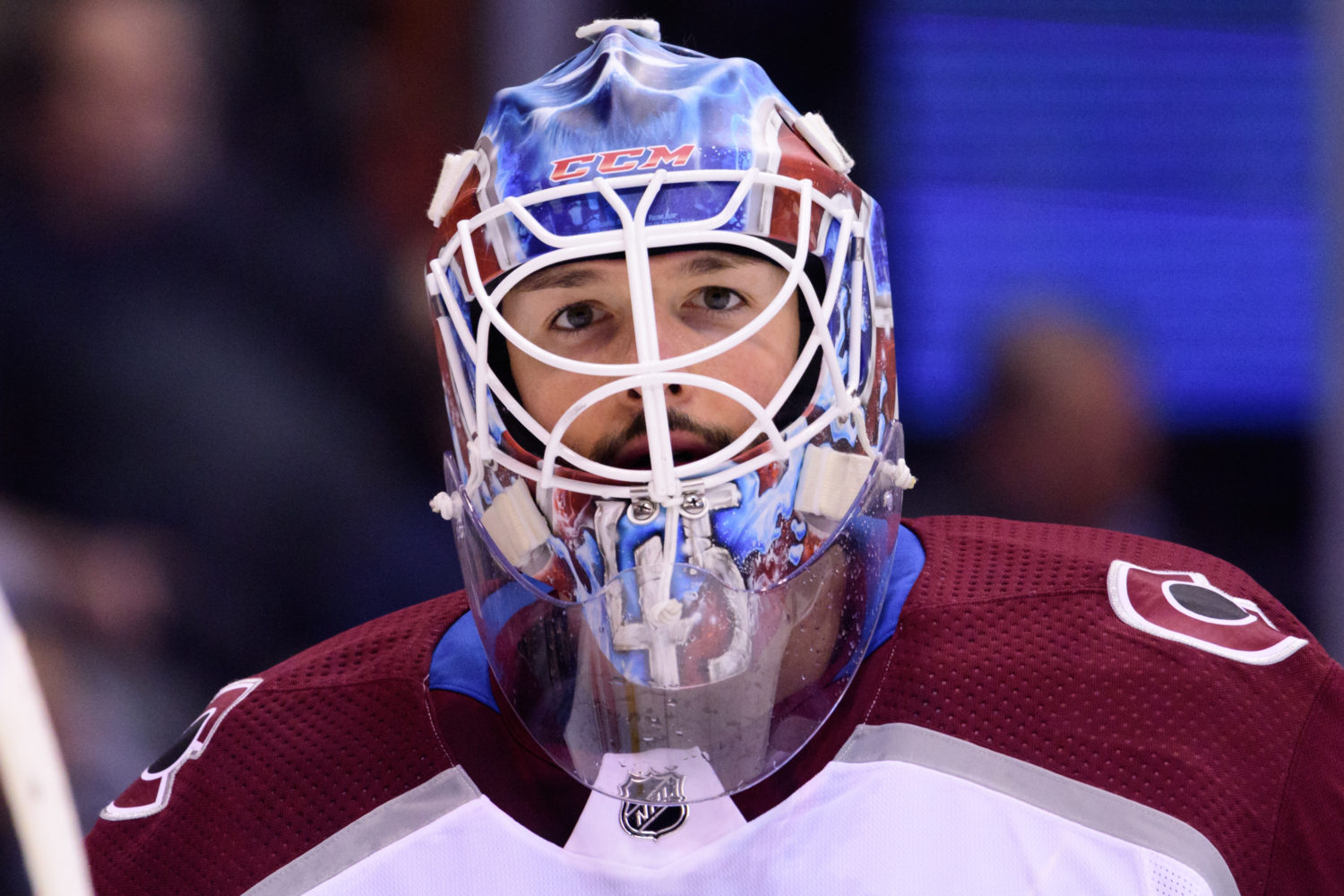