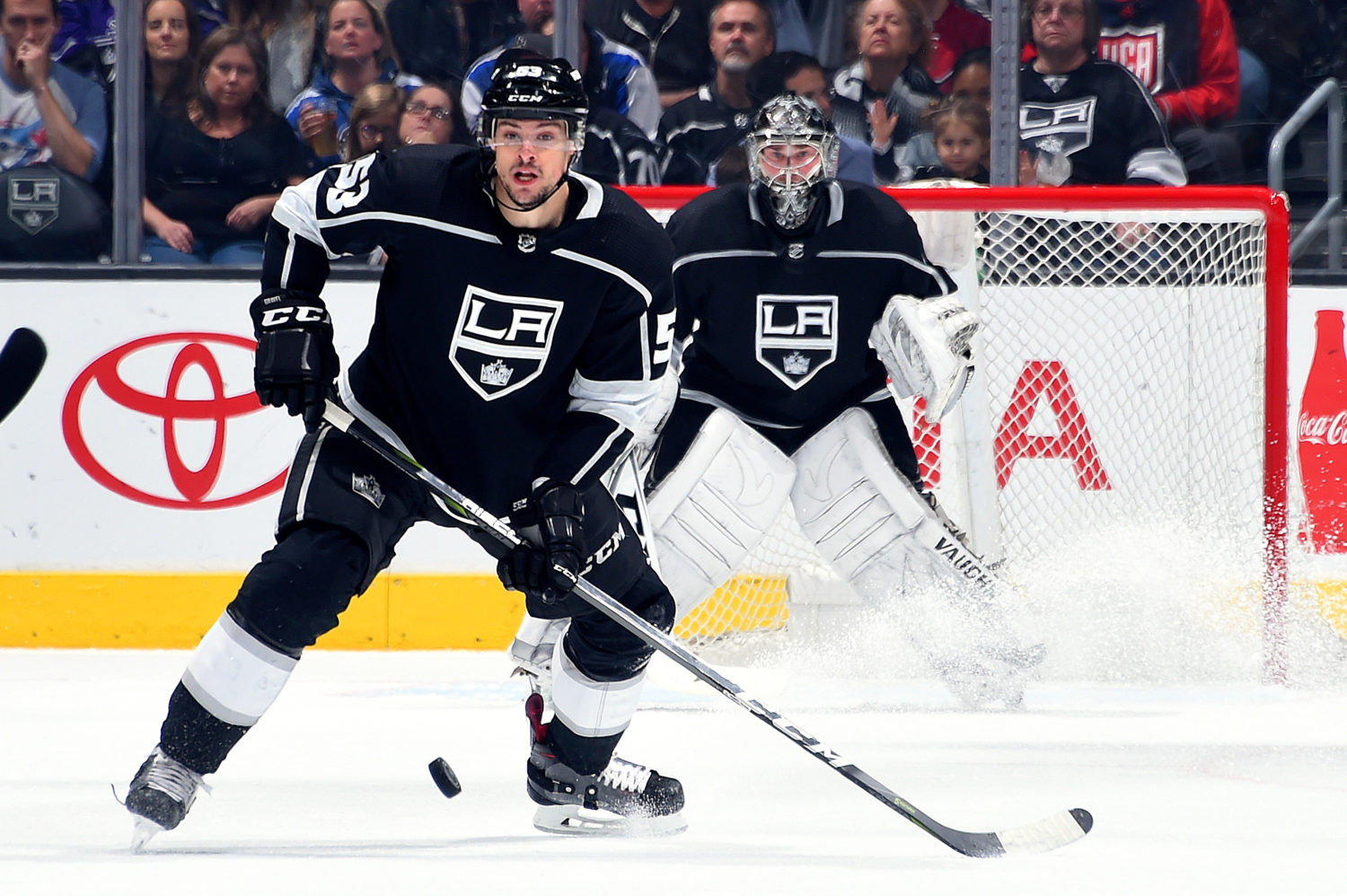 On the win:
Well, I’ll tell you, we’ve played them a few times here recently. I’ve watched their games, and they’ve just had a tough trip. They played every other day, and two back-to-backs since we played ‘em last time, and they still play with pace, they move the puck extremely fast. I just think they’ve improved in all areas, and they’re a tough opponent. I think all teams are finding out that they’re as tough a contest as we have with any other team we’re playing, so it’s a real credit to Tocc and the team and what they’ve done there, but I thought it was an important win for us. The guys dug down and found a way to get it done, and a really good game and two points heading into Anaheim tomorrow.

On how impressed he has been with Jeff Carter’s return:
Well, I’ll tell you, Carts coming back, we’ve said all along it’s just his presence in a lot of areas. He checks a lot of boxes, but he’s a production guy. He ends up in the scoring areas, he goes to the tough areas, he scores goals that other guys can’t. That last goal for me was really impressive. He pulled the puck off the wall and got it to the net quickly, and I don’t know if there are lot of guys – Tyler’s one of those guys, Kopi obviously. Jeff’s a production guy, but he provides leadership, he provides faceoff help, penalty kill and really quality minutes against pretty much anybody you want to play him with, so he’s been a big addition back in our lineup. [Reporter: Are you getting much more out of him than you might’ve expected after coming back from a significant injury?] To be honest with you, when you have Jeff Carter on your team and you’ve won with him here before, you just always have that reference point of what he’s capable of, and when he had the injury, you’re not sure how he’d come back at this point of the season with the schedule the way it is. I’ll give Jeff an awful lot of credit. His support people around him with our training staff, physiotherapist and the strength coach, he practiced one time and played games for us, which is remarkable, but it’s the work he put in when we were away and with the people that were around him that’s allowed him to perform at this level. We know he’s got a skill set, but Jeff’s a really good pro, and he’s done an awful lot of work through a tough injury to come back and produce the way he has. To say I’m surprised, I’m not sure I’m surprised because that’s my reference point for Jeff, but I’m certainly impressed with the way he’s come back.

On whether he can use Anze Kopitar and Dustin Brown for 24 minutes again tomorrow:
I think if you look at games that are big games, and you look around the league, Getzlaf was just on the road and played 25 minutes both nights, and I’m not surprised. He’s been a dominant player like Kopi’s been. Those guys play in all situations in a tight game and it’s a critical game for us. I do think we need more from other areas of our lineup. I think we had some guys that could give us a little more than they did tonight, but it hasn’t been the case most of the year. Our best players and our leaders carried the day today.

On Jack Campbell’s approach and usage at the end of the season:
Jack’s been terrific. I think you’ve got to watch with the schedule and the way it is, we felt all along we needed two goalies to win games for us, and Quickie’s been tremendous, but we wanted him to stay sharp and not overwork him in the net, and we just had this game targeted for Jack that we thought he’d come in and play well, and he has. The game in Winnipeg, he deserves an awful lot of credit for us getting a point, and he comes in tonight and plays a real solid game and allows us to get two points. You need guys on your team that don’t play as much as the other guy, just like a fourth line guy to give you quality minutes, and we need those games under Jack and situations like this where we’ll go back-to-back in a tough schedule to come in and win us games. That’s exactly what he’s here for.

On Kevin Gravel rejoining the lineup:
We’re going to need that position to fill minutes for us. You talk about Kopi and Brownie and Jeff and those guys playing big minutes, you’ve got other guys with Drew, Dion’s minutes climbed here tonight. I think this time of the year, with next-man-up when guys go down, and there are injuries and the schedule the way it is, we look at it as a real opportunity he can play or play more. That’s the way we want these young guys to approach it.