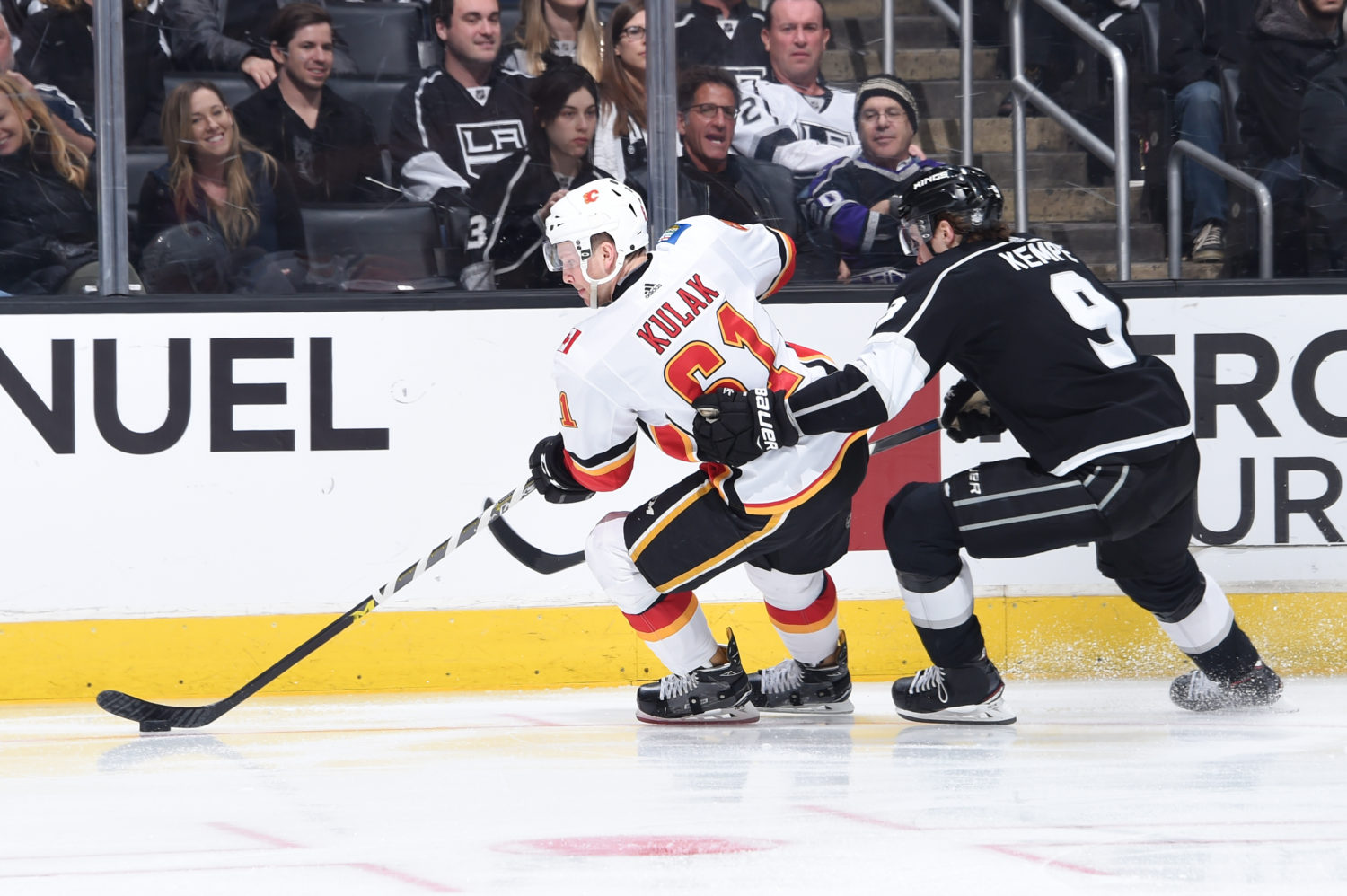 On the “complete team effort”:
Well, it was an important game for us. You don’t want to use your schedule as an excuse ever, but that was our 11th game in 19 days with lots of travel in there, and I think we came off a stretch like that before we had a couple day breaks, so we played 11-in-19 and a few-day break and 11-in-19 again. That’s an important for us, and for us, it felt like an extension of the road trip. You get off the road, get in at three o’clock in the morning, you have one day to recover and then play right away again. You knew Calgary was going to come and play hard. I just thought the guys needed to stay with for the distance, and obviously special teams played a big part of it tonight. Those are tough games, especially when you’re coming off the road like we did, so I thought the guys really showed up and played hard tonight.

On scoring three power play goals:
Well, the first one, I just thought they were a little reluctant to shoot the puck, but once we started shooting the puck, I think the key on the power play, if you get people at net and you get opportunities for lanes to the net and you shoot the puck early, it really forces the penalty killers to turn and face their net, and once Dion shot the first one there, it really kind of had a ripple effect on our power play where guys were looking to move the puck quick and get it to the net. I thought we had good entries that allowed us time in the zone. Once we got set up in the zone, I thought the guys were really doing a good job of getting to the net and looking to shoot the puck, and they got rewarded for it.

On the importance of scoring the first goal of the game:
It’s just something we’ve talked about a lot this year. To us, it doesn’t seem that important. We’ve been able to come back a lot and we don’t. Clearly, you put yourself in a better position keeping the game tied or getting ahead as long as you can. I thought that power play goal was big for us, but I think any time you can play with the lead, for whatever reason in the game of hockey, you have more energy playing with the lead than you do playing for behind. It just taxes you. Based on what we just talked about in terms of the schedule, tough game coming off the road, I thought that was extremely important tonight.

On the extent of Jake Muzzin’s injury:
I’m not sure yet.

On Adrian Kempe’s faceoff win on Dion Phaneuf’s goal, and whether it represents growth in his game:
It’s been a group effort. I think it’s a new position for him, and coming in to the National Hockey League, playing against the best in the world has been tough. Snack makes sure he gets lots of reps. Jarret Stoll is starting to break down some video. He’s so good in the faceoff circle. He’s been spending some time with Adrian and with Michael and I think it’s starting to pay off. A little more detail in what he’s doing in terms of having a plan, but then it becomes a one-on-one battle and really digging in and being ready to go. He’s got a good skill set, but I think there’s lots of things he can learn. It’s something we’re going to continue to work on, and to his credit, he’s put in a lot of work in to try and get better at it.

On the first period, and whether the Kings were surprised by Calgary’s defensive performance:
I think they’re missing some people obviously in their lineup, especially guys like Monahan and Tkachuk and Gaudreau out of their lineup. It creates an opportunity for other guys to play. They had some big, physical, heavy wingers on all four lines tonight, and you knew they were going to forecheck hard, you knew there were going to be a lot of pucks along the wall, and their top four D play a lot and they can really move pucks up the ice quickly. Not surprised by how they played and not surprised that it was tight. I don’t think it matters this time of year who you’re playing. There’s lots of pride at stake, and there’s lots of guys over there that took advantage of the opportunity, and you know they’re going to play hard and the game’s going to be hard-fought when you play Calgary, for sure.

On Dustin Brown’s pass to Anze Kopitar on the power play, and deriving chemistry from longevity:
Yeah, I think so. Those guys have had a ton of success. They read off each other really well. Jeff, Brownie and Carts when they’re on the ice together, they’re very high-end offensive guys that have a ton of experience and read the game very well. I would totally give credit to those guys for any kind of play like that that happened. It certainly wasn’t scripted from us.

On whether Dion Phaneuf’s goal came from a drawn up play:
You look at the penalty kill and you try and find out what their tendencies are, and you try and take advantage of it. But anytime you can strike right away on the power play and shoot the puck, especially they try to trap down, so they’re going to create an angle up top, I think he knew that, and guys down low knew the puck would go to the net if there’s a lane. I thought the execution was really good. Their guys were looking to get the puck up top and get to the net and try to create an angle, a shot lane to the net, and it was perfectly executed.