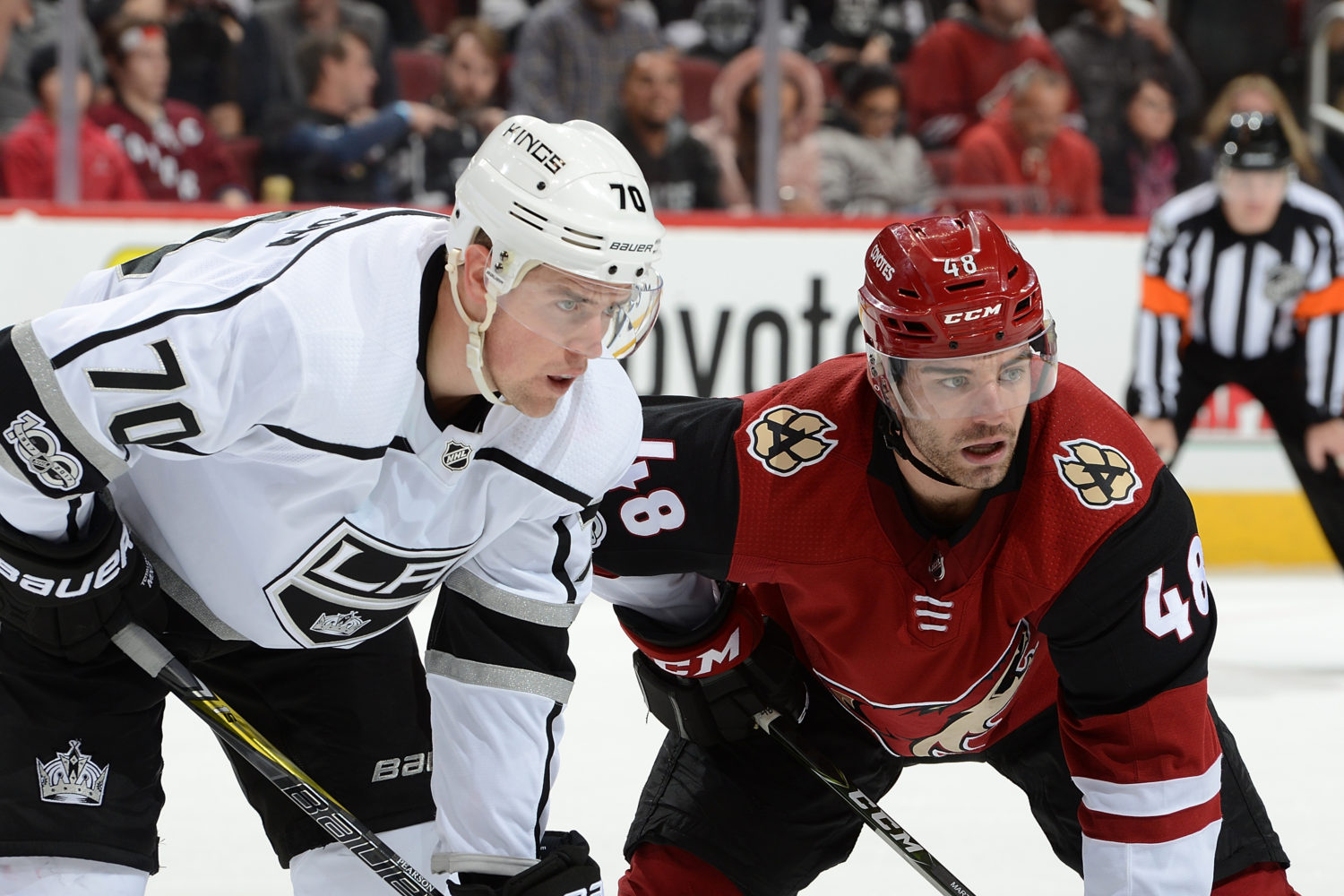 A fine, fine Tuesday afternoon to you, Insiders. The LA Kings held an optional morning skate in which those who played Monday night against Vancouver didn’t take the ice. Jack Campbell was the only goalie to skate – unless, of course, we’re counting Bill Ranford – and didn’t exactly linger. The starting goaltender will be learned in warm-ups, as is protocol for the second night of back-to-back sets. Jonathan Quick has started both nights of a back-to-back once this season: January 18 versus Pittsburgh and January 19 at Anaheim. He was excellent in the second game, stopping 29-of-31 shots in the 2-1 loss. Los Angeles is 7-3-1 on the second night of consecutive games.

-Their vitals: Despite some comings-and-goings that Darcy Kuemper was under the weather, he will, in fact, start tonight’s game. Kuemper, 2-2-1 with a 2.61 goals-against average and a .906 save percentage since joining Arizona, is coming off a 27-save shutout of Vancouver, and both of his wins with the Coyotes have come against the Canucks. You may remember him as an effective weapon Minnesota used against Los Angeles; in seven career games versus the Kings – playing in front of the Wild’s traditionally stout and responsible team structure, mind you – he’s 3-1-2 with a 2.33 GAA and a .924 Sv%. Antti Raanta (lower-body) is out, so Adin Hill backs up, while Laurent Dauphin (lower body) and Zac Rinaldo (upper body) are banged up and Luke Schenn is a projected scratch. Via Craig Morgan, the Coyotes are likely to line up with Panik-Stepan-Keller, Martinook-Richardson-Cousins, Domi-Dvorak-Perlini and Archibald-Hamilton-Fischer up front and a defensive group of Ekman-Larsson-Demers, Connauton-Hjalmarsson and Chychrun-Goligoski. Head Coach Rick Tocchet was granted a leave of absence to deal with a family illness, so Assistant Coach John MacLean will coach the team in his absence. Arizona is 10-3-2 in their last 15 games and have won three in a row on home ice. “It’s easy to say, ‘you want to win,’ and that’s great, but we just want an effort. Just an effort,” MacLean said. “We want to keep this ball rolling. It’s been going in the right direction here right now, so if we can keep it going in that right direction, it’ll ease [Rick’s] mind and it’ll be great confidence for the team.”

-An update, via Elliotte Friedman:

Hearing that Mike Futa, concerned about the search being in the middle of LA’s playoff race, has “respectfully withdrawn” his name from consideration for the CAR GM job

Good news for Kings fans, who have reaped the pinnacles of Futa’s hard work this decade. Futa’s time will come, but he’s in a good spot with Los Angeles and is very highly regarded in circles across the league.

-Adrian Kempe was one of the facilitators of Monday’s 3-0 win, making the most of his 12:57 of ice time by contributing a pair of assists, winning 6-of-10 faceoffs and joining forces with Tanner Pearson and Tyler Toffoli to serve as effective forecheckers and ice-tilters. “We played a lot in their zone and we got two goals out of it, so obviously you get more confidence when you score goals, and I think that’s what me and our line needed,” he said.

He also disclosed that he’s feeling more comfortable at center than wing.

“I think I like to play in the middle more,” he said. “I think I can create a lot more, both starting from our own zone, building my speed up and trying to help the wings get pucks, and I think I’m more useful in the middle. I kind of like it more there, too. I think it was a good example yesterday. We played a lot in their zone, and starting from our own zone, I think we did a good job down there. If I had to choose, I prefer the middle more.”

The two forwards Kempe has spent the most amount of time with are Toffoli and Pearson. Interestingly, he’s a +3.0% CF%Rel with Pearson, but marginally in the red alongside Toffoli. The centers he has spent the most time alongside are Torrey Mitchell and Nate Thompson – he’s spent roughly 40-minutes of five-on-five time alongside both, and only 24 minutes alongside Anze Kopitar – so I’m not sure if it’s really possible to learn anything really concrete from the available metrics about any sort of trends developing during his limited time as a left wing.

-Toby Rieder makes his return to the fictional banks of Gila River to face his former mates. “It’s exciting,” he said. “Obviously a little weird being in the other dressing room, but I’m really excited for tonight.”

It’s also the 300th game of his NHL career. He’ll look to pick up from what he accomplished in his 299th, when he teamed with Jeff Carter and Trevor Lewis on a speed line that was an effective part of the team’s north-south attack.

“We could’ve had a couple goals,” Rieder said. “They’re really easy to play with. Straight lines. Obviously, Lewie is really fast, and Carts is just an unbelievable player in the middle of the ice. It makes it really easy, and too bad we couldn’t score a couple last night, but we’re going to try to do better tonight.”

Now, the roles in the rivalry are reversed.

“I know I never liked playing against the Kings [as a member of the Coyotes],” he said. “I know that we played each other a lot, and you kind of get familiar with the other players on that team, and as a part of the Coyotes, I just never really liked to play against the Kings. They’re a hard, heavy team and it wasn’t fun.”

-Arizona is one of the league’s hotter teams at the moment, and those familiar with the Kings-Coyotes rivalry understand that Gila River Arena, where the Kings had won three straight games before an overtime loss on November 24, hasn’t always housed the team’s most functional or scripted performances.

But it’s not November 24. It’s the 70th game of the season, and because they’re in a tight playoff race, there’s no margin for any sort of lapse after Monday’s performance.

“We could be playing in TSC for this game. Guys understand what position we’re in and what we need to do,” Dustin Brown said. “It doesn’t matter what arena we’re playing in at this time of year, who we’re playing against. These teams can be a little bit more dangerous because they’re freewheeling and they’re out of it, so they have nothing to lose. Not that they can get away with cheating [for offense], but the tendency there is to cheat, and sometimes teams that cheat can cash in, too, so it’s being aware and making them have to come through us every single time.”

-Brown was also asked about what has stuck out about Anze Kopitar’s performance. Kopitar is on pace for a career-high 89 points, which would better his previous high of 81, set in 2009-10. With four more assists, he would equal his career-high of 51, set in 2011-12.

“I think after last year, a tough year for him, a tough year for the team, I think the biggest thing is he’s having fun playing the game, and that can take you a long way when you have a skill set like his,” Brown said. “It’s hard to explain it to people, because we play a game for a living, but he’s really enjoying playing, and I think that’s kind of helped him take it to another level.”

As for the on-ice adjustments in Kopitar’s game, Brown pointed to Kopitar’s consistency and more attention towards shooting the puck.

“You shoot more, and they kind of look at you as a shooter, and then he finds people. He’s just been really good. It’s more of the same for him. Last year was just an anomaly in the wrong direction.”

Ace wanted me to tell you to vote for him before you go night night…lakings.com/barkmadness pic.twitter.com/ySgctESkqc