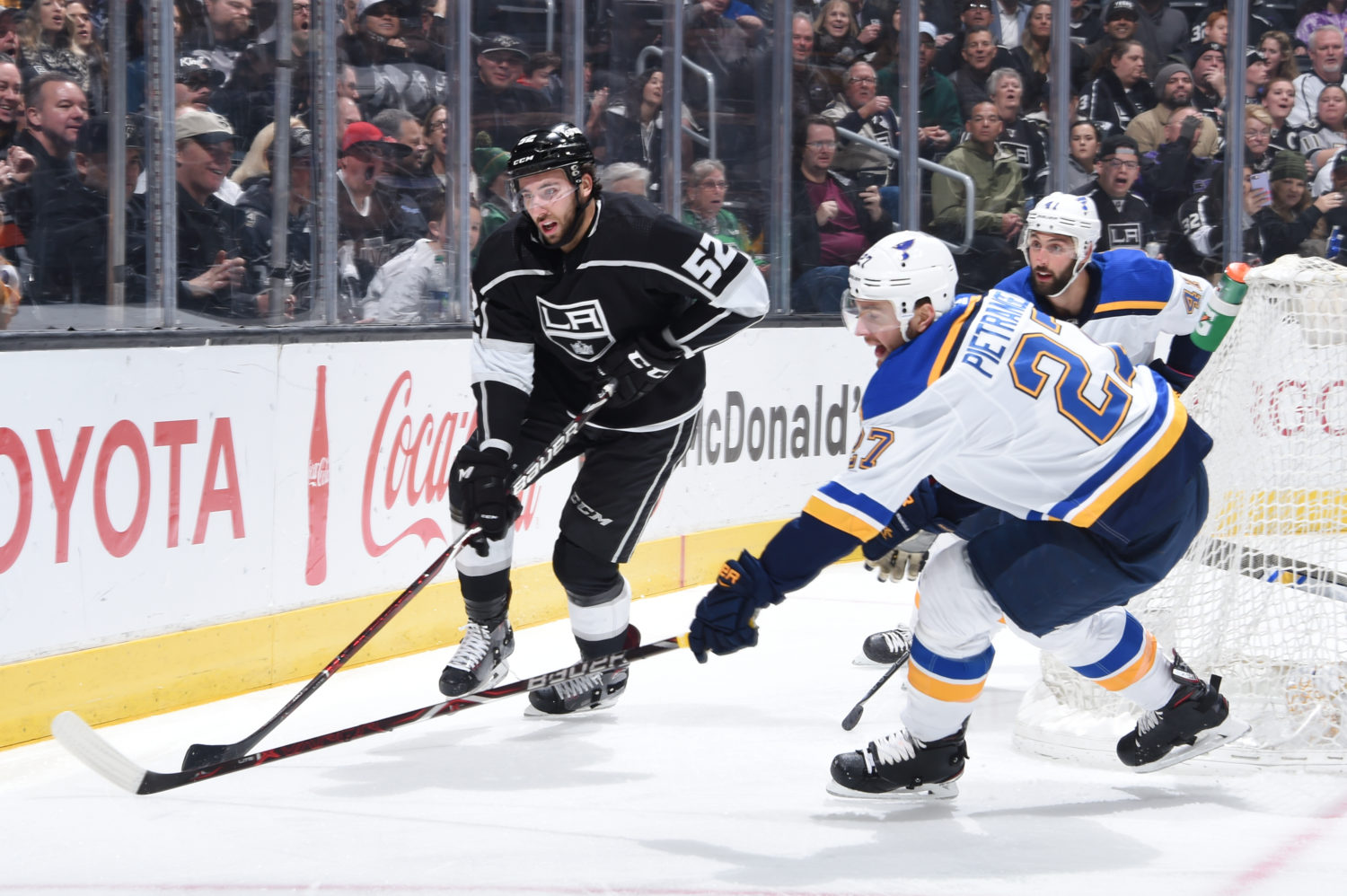 On the game turning after the team seemed to “have a handle on things” in the first period:
Well, we didn’t feel that way in the first. They had playoff fight on the puck, we didn’t, so it’s a little concerning, to be honest with you. I thought they were tougher on pucks all over the ice, almost like the Columbus game where we were a step behind and we were able to shift gears against Columbus. We didn’t tonight. Our fight on the puck was not at a playoff level if you expect to win this time of the year, so it’s a little concerning, to be honest with you. Just got to decide as a group where we’re going to go from here. It’s tough hockey this time of the year. We saw that with Dallas, Columbus coming in here. You see it every night, and you certainly saw a team like St. Louis who has slipped a little bit lately trying to get back in the playoff hunt, and to me, it was a pretty simple equation. Just look at the compete and the puck battles. We were at a very low percentage of those tonight and the outcome dictated that.

On how to make sure this isn’t a negative mental turning point for the team:
Well, I hope it’s negative. I don’t think you can look at that at any point, you’re not going to take anything positive out of that hockey game. The only thing you’re going to take out of that hockey game is how hard it is this of year. So, lots of guys here know that. There’s lots of guys here that who’ve got to learn that, but as a group, we’ve certainly got to acknowledge it.

On whether the team was too aggressive up-ice in looking to tie the game late in the second period:
You’re talking about the third and fourth goal? [Reporter: Yeah.] Well, we should’ve scored. Had an opportunity to score at the one end and didn’t. Puck came back in our zone and we giftwrapped it for them, so I don’t know if that was taking any risks. We had the puck and full possession with the line change going on. Just passed the puck off the boards, ended up turning it over, and that puck ended up in our net, so that’s just a blatant turnover. Same thing with the other one. We had people back – just again, they came up with a loose puck there, a bobbled puck, so both of those pucks [inaudible]. I didn’t see it that way. I mean, you guys probably have a better view of that than I did. I actually thought we had created some offensive opportunity, but we couldn’t check a hat tonight.

On any concern that the loss could have a debilitating effect on the team:
You know what? I think you guys put a lot more weight in a game than we do. We won the game in Boston and I think we were ready to have a parade. It was a great opportunity for guys to come through in a key situation, and you lose a hockey game. To me, our whole thing all along is be honest, right? Did you guys put yourself in a position to win a hockey game tonight? No, we didn’t. Do we understand how hard it is to win this time of the year? Yes, we do. The thing is, I said it tonight, there’s 15 games left – nine at home, six away. You can’t put off untiul tomorrow what you can get done today. Don’t wait for the next opportunity, and to me, I’ve never been like that. You take a look the opportunity, you take advantage of it. You’re in your power to win a hockey game today. We didn’t today. We need to for the back-to-back we’ve got coming up here, and that’s it. I’m not going to let one game carry the weight of the season. One game was very disappointing. Our group, they know that. They’re going to know that. We all know that. We have to be a lot better, a lot more determined in our competitive spirit on the puck. If we do, we’ll handle it more, we’ll come up with more pucks, spend more time in the offensive zone and give up a whole lot less than we did tonight.

On whether he took Alex Iafallo off the top line to move him away from St. Louis’ top line:
You guys can make your own conclusions on that one.