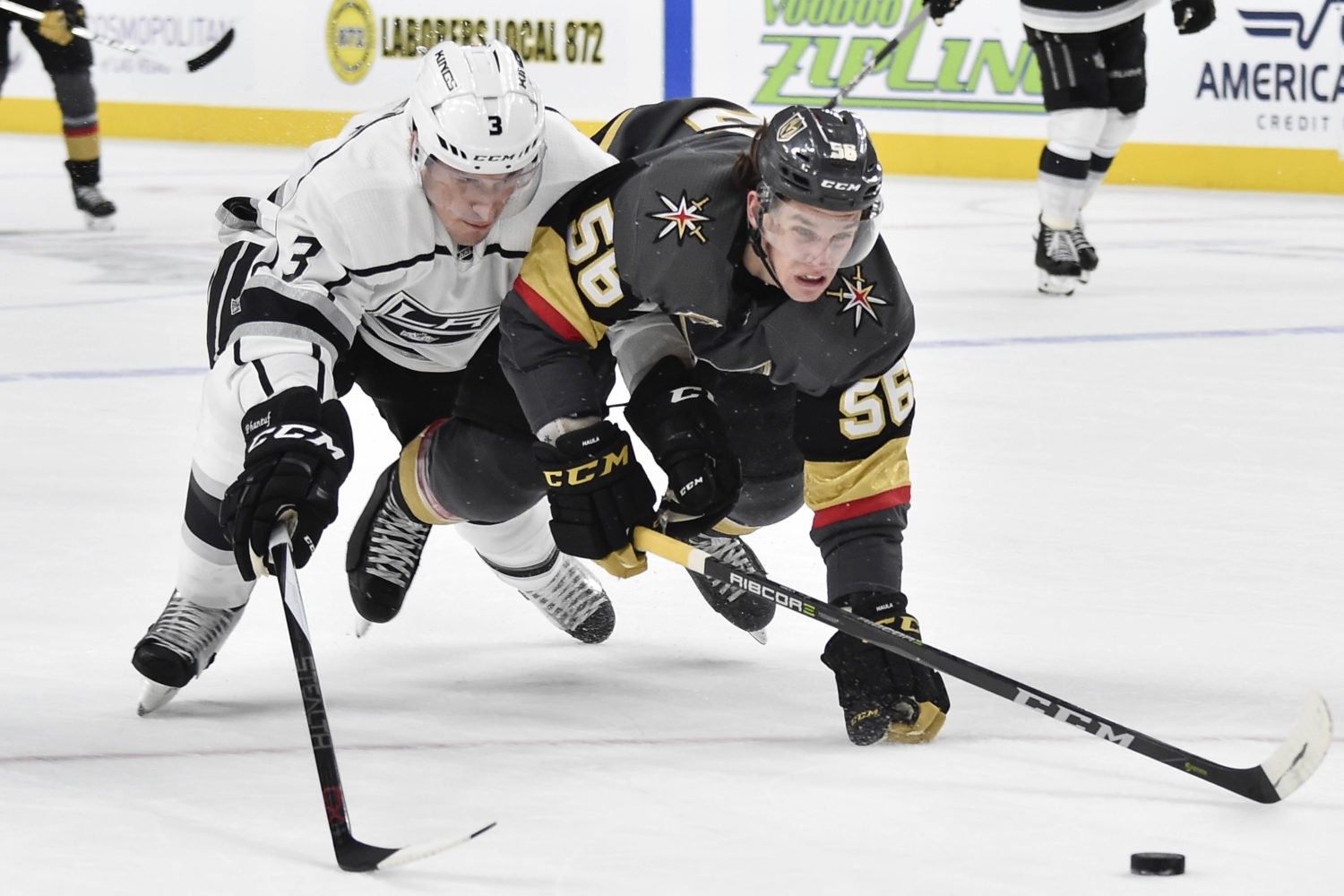 Anze Kopitar, on how the game felt:
It felt good. I mean, obviously they came out strong, get the early goal. But we didn’t get discouraged. I think right after that goal we got our legs underneath us and really started playing the way we wanted to play and I thought we did a pretty good job second half of the first period. And then second period, get a bit of a cushion and then really the third period, we knew they were coming, but I thought we locked it down pretty well. We checked well, we didn’t back off a whole lot. You know there’s times where you just get pinned in the zone, that’s just the way it’s going to be, but I thought we did a really good job in the third.

Kopitar, on his goal:
I got it in the middle of the ice really, and I saw, I think it was Sbisa got a little flat-footed and I thought I’d try to go around him and it worked out.

Kopitar, on whether their second period goals were “opportunistic”:
Sometimes that’s what it takes. I wouldn’t say they had a whole lot of grade-A scoring chances and we had a really good shift. I think it was Amadio, Mitchie, and somebody else, I’m not exactly sure. But we had about three grade-A scoring chances, we just didn’t connect on them, and then we were able to get one pretty late and get the two goal cushion.

Kopitar, on what he liked about the game defensively:
You just said it all really. I think the biggest thing is really to support each other and then just make the plays that are there and kind of get out of the zone like that.

Kopitar, on whether it was nice to get the win for Campbell:
Yeah, it was great. I mean I’m pretty sure he got it for himself. There was no shortage of shots or chances. So yeah, he was really, really good back there.

Kopitar, on how he would compare the two teams at the end of the series:
Well I mean, to be quite honest with you, we didn’t look at it that way. This is the time of the year where every single point counts and we put ourselves in a bit of a hole before, so the four points are the thing that counts right now.

Jack Campbell, on how it felt to get the win:
I just think for the team it was a huge two pints and a great weekend. So for me personally, it’s always great to win and it’s definitely great to do it with this group and it was exciting. Like I said before, it just means a lot that it was a big two points and puts us where we want to be.

Campbell, on the team’s reaction after him getting his first win:
It just meant the world to me. Since I got traded here, the guys, I can’t speak highly enough about. So it was a really cool feeling and one I’ll never forget.

Campbell, on whether this game was just like any other:
I mean, for me it was a little bit more than just another game. Of course I want to prove to everybody, but most importantly my teammates, that they can count on me. So it was kind of weird because this was probably the biggest game I’ve played in and I felt the most comfortable just because of the surroundings and the locker room. Quickie was there to give me some tips on what their tendencies were and the boys played great in front of me, so it was awesome.

Campbell, on playing against his former teammate, Maxime Lagace:
It is really cool actually. He’s a great guy, sincerely, so I’m happy that he was able to get a second chance too, and with somebody else and see how he’s doing well. And of course I want to beat him, but it was good to see him down there.

Campbell, on the atmosphere in the building:
Its great. I kind of got a little taste in pre-season which was nice, but I mean, it was electric. I mean I’m sure you guys heard those speakers. It was really cool and I thought the guys did a great job. They got that first one, but we bounced right back and really got the momentum and kind of took the energy out of the building the whole night, so it was great.

Campbell, on if there was a particular moment when he felt like he was in a rhythm:
To be honest, in warmups I was really excited and you know, Dusty (Imoo) has really helped me down in Ontario to just let me know that no matter what the situation is, to just kind of relax, and same with Billy (Bill Ranford) too. So in warmups I was like, “Man, I’m actually really relaxed right now for how crazy this setup is.” So I knew then that I was going to be fine, and the boys played great in front of me and that obviously makes all the difference.

Campbell, on what happened with his pad in the first period:
I think what happened was it came off my skate, because you tie the pad to the skate, and it never happens. It never comes off, so I’m thinking, “Great, my first game in four years my thing comes undone and these people hate me.” But yeah, so we fixed it up. I think it was when the guy made contact with me the skate might have clipped it. But yeah, it worked out.