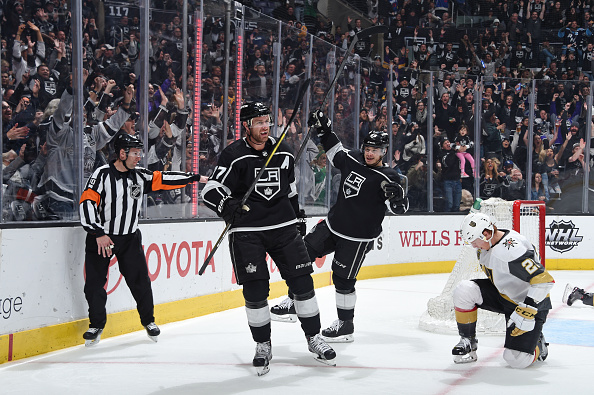 On how the team was able to battle back to win:
You know what, we stayed with it. I thought, obviously we chased the game a little bit there. That power play goal was huge for us. I think any time you get some sustained pressure there, the power play was not very good early but had some good attack time there and ended up scoring a big goal that really gave us the life we needed. Now you’re within one and I think the flurry at the end was outstanding. Guys came up with a lot of loose pucks. There’s a lot of hunger for the loose pucks. I thought the penalty kill had the urgency that it needed tonight. That’s a good power play. They’ve gone from about 25th to top-10 in the last 35-40 days, so they’ve been hot. We got to stay out of the box. I just thought that goal gave us a lot of energy and I thought the level of urgency escalated with it.

On how they were able to get bodies and pucks to the net in the third period:
Vegas checks very well and they play fast. They get pucks on their stick and they’re coming back at you in a hurry and I think sometimes when you get behind, the tendency is to try and score on the rush and they’re not going to give you that so I thought we did a good job working back to generate speed so we can get in behind and recover some pucks and I thought we recovered some pucks but they’re a good hockey team. They played fast, they come after you and they make it tough to generate anything so I think you really have to play a straight ahead game, get pucks in behind them and you can’t stretch out against them. If you stretch out against them you’re going to turn pucks over so I thought we did a better job of working back so we carried speed behind there in the third period.

On how the Kings tried to get the puck behind the Vegas defense:
Their forwards pursue and track the puck extremely well so it kind of pushes into the D. You’re getting squeezed from the front and the back. Their D do a really good job of holding gaps and dot lines so if you don’t put pucks in behind them it really fuels their transition game. You have to want to forecheck, you have to commit to the forecheck and you have to have some passion in your forecheck so I thought we did and I thought it made a difference.

On Dion Phaneuf’s offense since he came to the Kings:
Well I mean I think he’s got a long history of being a go-to player. He has put up big points before. I think he has that offensive ability. The thing I like about Dion is he wants to be in those situations. He likes the pressure of those situations, a lot like you see with Drew. I think for sure it’s a guy that we can count on to contribute offensively.

On Jeff Carter’s goal and if he just needs to throw pucks at the net while he gets his timing back:
I think Jeff’s had some good looks the last couple of games and I just think you see a little bit of some of those situations where if he had been playing all along he probably buries them, but he’s getting to spots where he’s getting opportunities and he’s going to get sharper as we move along here but it’s good to see that he’s getting those opportunities. I think it’s only a matter of time before he starts to convert.

On his shuffling around lines:
I did quite a bit. I thought some guys weren’t very good early and then as things wore on some guys got better and Jeff and (Kopitar) have always created a little bit before. Rieder moved around for us a little bit. Tanner went up and down. I think Thompson played all three forward positions so it was a real critical game and they were moving their guys around because the one kid (Lindberg) got hurt and then Neal, something was wrong with Neal and he wasn’t playing and now they have their lines all mixed up and match-ups. I think both coaches know it’s a really important game so you’re going to need to rely on a lot of different combinations to get the job done.

On the quickness of Anze Kopitar’s release on the game-tying goal:
I think after last year we forget to look past last year and how great a player he has been his whole career. (Kopitar), I think he’s one of the dominant top players in the league and I think we’ve all seen him do stuff like that before. And (Kopitar’s) another guy – he wants to be in that situation, he wants to make a difference and I’m not surprised he pulls something like that off.