How Dion Phaneuf settled quickly with the Kings 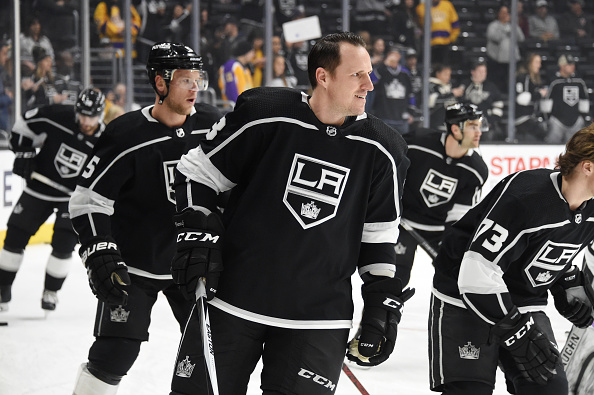 Shortly after Dion Phaneuf was traded to the Kings from the Ottawa Senators, the defenseman found himself on FaceTime with his dog-sitter, Shane.

Phaneuf was in Pittsburgh with the Senators on an up-and-back trip and he needed someone to pack a bag for him with clothes for the remainder of the Kings road-trip. Los Angeles still had four games left before the team returned home and Phaneuf had packed only for one night.

“He picked out a few suits a few pairs of jeans, some shirts and away I came,” Phaneuf said. “Now the only thing I have to get down here is shorts.”

How Phaneuf was able to quickly get settled, despite being on the road, was a testament to his teammates past and present as well as both the Kings and Senators staffs.

“Bottom line is when you’re in a team sport, your teammates, staff, everyone helps you out,” he said.

Nate Thompson, who was also acquired by the Kings in the same trade, was in Ottawa getting treatment for an injury and went to Phaneuf’s house to get the big defenseman’s bag before he left for the airport. Thompson then found himself carrying five bags, his and Phaneuf’s, before he boarded a plane to Pittsburgh to meet up with Phaneuf and the rest of the Kings.

“That was the only bad thing, I had to cart everything with me,” Thompson joked. “He’s pretty good about getting me coffee or whatever it may be. It wasn’t a big deal. I’m sure he would have done the same for me.”

Clothes weren’t Phaneuf’s only issue. His car was also parked at the airport in Ottawa and he needed it to be moved. Shortly after the trade, one of his ex-teammates called him and said he would pick it up.

“One of the guys there took my car back to my house,” Phaneuf said.

As Phaneuf tried to figure out his life through this upheaval, he also had to get ready to play for a new team in the middle of a playoff race.

Phaneuf had been traded twice in his career mid-season, from the Calgary Flames to the Toronto Maple Leafs and from the Leafs to the Senators, so he knew how to handle the situation.

“My real focus is just focusing on the game and focusing on my job at hand,” Phaneuf said. “I believe if you keep your focus narrowed in on that, there’s so much energy you have to expend with thinking, and your head is kind of spinning and you’ve got so many things going on trying to settle everything out, whether it be your dog, your family, getting your clothes, your vehicle so there’s lots of things going on but your main job is you have to dial in and focus on playing hockey. That’s the main thing that I really tried to focus on.”

It also helped that he was able to practice with the Kings before he played his first game with the team at the Penguins.

“(That) really helped me not only to get to know the guys but a little bit of the structure and the system,” Phaneuf said. “I think it was a really, really important thing for me to get that first practice.”

Also, his new teammates quickly made him feel at home right away.

“I look at the way that they welcomed me in the room and it makes you feel comfortable as a player,” Phaneuf said. “Coming into a room when they welcome you that way, and when you feel more comfortable I believe you’ve got more to give.”

When the Kings landed in Los Angeles last Wednesday at around 1 a.m. after their game at the Winnipeg Jets, a car service was waiting for him. Phaneuf, who is married to actress Elisha Cuthbert, said they have a residence in Los Angeles, which helped.

He then spent the next day – an off day for the Kings – trying to get settled, such as getting a car and other items figured out. The dog, a miniature schnauzer, is arriving this week.

“You try and get as much stuff as you can organized and really the bottom line is you’re getting ready to play a hockey game,” Phaneuf “Right now I’m settled in and trying to learn the streets and everything is going well.”