NHLers talk on the importance of Anze Kopitar to the Kings 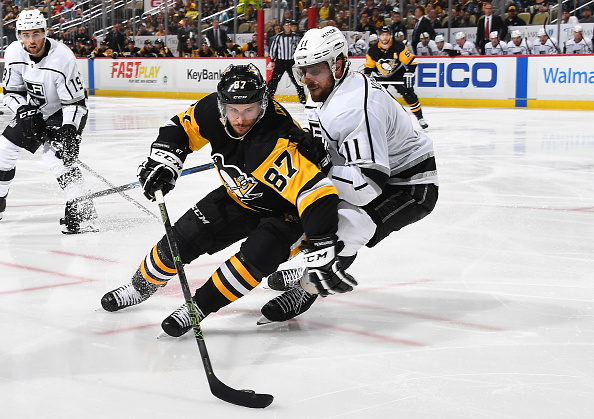 Captain Anze Kopitar is in the midst of one of his best regular seasons of his NHL career. He has 64 points in 61 games, good for a 1.05 points per-game average – the highest he has ever held. This has him on pace for around 86 points.

His faceoff win at the Boston Bruins in overtime led to Tyler Toffoli’s last-second winner.

He won another clean faceoff at the Tampa Bay Lightning that led to Drew Doughty’s last-second regulation scoring chance.

He beat Jonathan Toews in the defensive zone late against the Chicago Blackhawks, which iced a Kings’ win on their last road-trip. He also beat Bryan Little on three straight draws late with the Kings up one at the Winnipeg Jets in their final game of the road stretch.

Simply put, Kopitar has been an all-around maestro for Los Angeles this season – maybe more-so than any previous year in his career. His resurgence has come at a crucial time for the team – with Jeff Carter out all but six games because of a deep cut that required surgery to repair a tendon in his ankle. It’s hard to imagine the Kings challenging for a playoff spot without Kopitar playing at such a high level.

We talked to several opponents on the Kings’ last road-trip about Kopitar and what about his game has been so strong this season in particular.

It’s hard to tell. I don’t see a lot of the West Coast games but I think year after year he’s always, regardless of numbers, he’s always a really tough guy to play against and he’s a responsible player and offensively he has a lot of talent and skill. I know everyone else pays attention to numbers, but numbers aside I think he’s a pretty tough guy to line up across from.

On what makes Kopitar tough in the faceoff circle:

Even when he wasn’t scoring last year he was still an effective player and still a dangerous player to look for. I’m sure something goes into your head when a new season starts fresh and it seems like those guys got off to a hot start, talking about Kopitar and (Dustin) Brown and guys like that. You look pretty much every night in the boxscore, he’s involved in their teams’ goals. He’s had a great start to the season.

He’s big, he can skate, he’s got all the tools whether it’s shooting or being able to make that next pass and he’s a player that, I think, when I was kind of younger coming into the league he was one of the guys that I wanted to watch because he was able to play in the league at such a young age right away and have success. He’s big and he can skate and he can do a lot of different things and he’s obviously well aware defensively so he does it all I guess.

He plays a lot of minutes number one, and all situations and he’s a heavy player. He plays a 200-foot game and you really have to keep inside body position on him because he protects the puck well and he can wear you down.

His size obviously and his skill-set (stick 0ut). His hockey IQ is really good. He’s tough to knock off the puck so you don’t want to let him have too much time out there.

He’s just a big body, moves well, he plays good in all three zones. I think too much emphasis gets put on scoring goals and putting up points. I don’t want to speak for the Kings organization but I’m sure they were just fine with putting him out on the ice last year like they are this year. He’s a guy you want in all situations and I know playing against him he’s very tough to play against.

On what it means for a team’s top player being able to play in every situation:

It sets an example for the rest of the team, a guy that can play in all different situations – maybe a lot of younger players these days seem to focus on numbers and results and I think you can help your team be successful in a lot of different ways without scoring goals and getting assists. So Kopitar has shown he can do both.

He’s big, he’s a big body. He does all the right things with the puck. He starts with the puck, he’s really good in the faceoff circle, so you start chasing the puck around. They get the puck right away and he seems to have it all shift, so it starts there and I guess just being that big body and using that body to keep the puck and keep guys away.

(Kopitar) is big, he can skate, he can stickhandle, he can shoot, he pretty much does it all. He’s obviously a tough match-up.

He’s an outstanding player in the league. He’s such a good passer, he’s got a long reach, he protects the puck really well. You watch his game and he does all of the little things right at both ends. Offensively, he’s a big, heavy guy that has really high-end skill and has a dangerous shot off the rush too. He’s definitely a pretty tough guy to face.