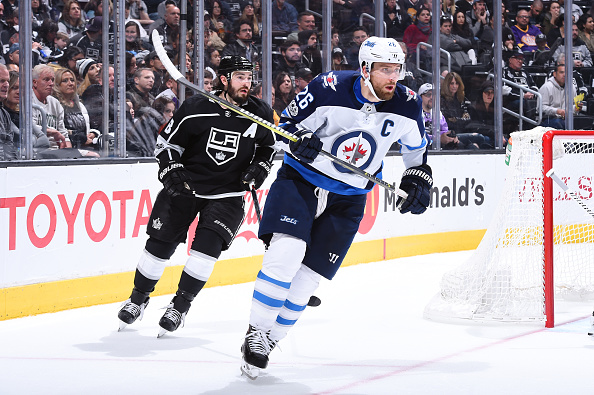 On what you have to stay away from with the Jets:
Well, if I want to peg it on one area, the one thing is you don’t want to turn pucks over. I think Winnipeg is as good a team we’ve seen in the Western Conference this year. The big step, I think, Winnipeg made is just their commitment to play without the puck. I know you guys love analytics, they’re the number one team in the league at denying access to their zone and that would surprise a lot of people because they’re so gifted offensively, but they’re a good team. I think they have size. They’ve got lots of skill. They’re one of the top teams in scoring and now one of the top teams at defending and their special teams are solid. I think you have to play the game the right way and you really have to manage the puck, because if you don’t manage the puck, two things will happen. They’re going to get scoring chances and score goals or they’re going to go on the power play and neither one of those is good.

On if the Kings’ style lends to playing a good road game:
I don’t think it’s our style. I think it’s the style of the National Hockey League. You have to manage the puck. You don’t want to allow teams to get their transition game going. You don’t want to spend too much time in your zone, so we want to encourage our team to attack and make plays when there’s space in front of us but there’s lots of times, especially early in games, where there isn’t any space in front of you where all the ice is in behind and I think it’s important that we recognize that and get pucks in behind and establish the forecheck and then you have opportunities like the Amadio line had last night where they had a little bit of separation, they’ve got speed and numbers on the rush and they use their individual skill to make a play that ends up in the net. So to me t’s just playing the game the right way but the big thing is playing the game the right way for 60 minutes. There can’t be lapses, especially early in hockey games because you let teams either back in games or you end up chasing the game and then it becomes a much more difficult task.

On the starts the last two games:
I think we’ve had good starts in games. If I go back to, you know, we’ve had good starts in games. Sometimes it’s the first shift or the first couple of shifts, I thought last night was just shift after shift. It didn’t matter if it was (Kopitar’s) line out there or Amadio’s line. I thought there was a real strong intention of playing the game going forward, playing the game fast, I thought the team game and the lack of hesitation in our play was really good and because of that I thought our gaps were really good, but we were able to sustain shifts – shift after shift as opposed to having one good shift of O-zone time and then getting backed off so I just really thought the team did a good job of following up the group in front of them by having a real, sound shift of playing the game the right way.

On the challenge of playing a back-to-back:
I think it’s really important to let the puck do the work for you early. And again I don’t think you want to put yourself in a situation where you have self-inflicted wounds by not doing the right thing, not managing the puck well or not being ready to play. We’ve seen teams where they’re sitting here waiting for you and they know you played the night before and their focus is on getting pucks behind you and making you execute through them, so we think that’ll be important here tonight, but I think this team has done a good job on those back-to-back situations most of the year. I think the guys are well-trained. I think our staff does a really good job of giving the resources to do a good recovery. Last night with travel crossing the border makes it a little more difficult but I still think we got into the hotel at a decent hour and a lot of today is as much mental as it is physical, just about mentally prepared to play and coming in ready.

On if Jonathan Quick will start in goal against the Jets:
We’ve got two goalies and one of them will play.