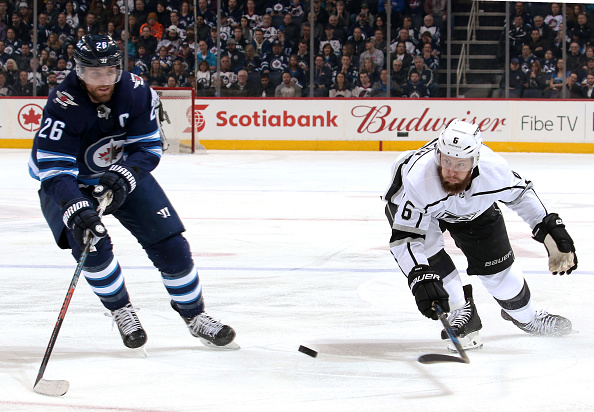 On the win over the Winnipeg Jets:
I thought that was probably one of the better wins of the year, just in terms of the way it started out, you give up a 5-on-3 goal to a power play that’s extremely dangerous. I thought as the first period moved along we really started to get our game going a little bit and then we had a really good second period. Certainly happy with the back-to-back with the travel we had last night – not just winning the game but I thought we got better as the game went along and really had a good push throughout the hockey game, which is great to see.

On the second power play unit getting two goals:
Why are we calling them the second unit? They were the first unit tonight. I thought they were terrific. They had a gameplan. They were really – moved the puck quickly. They came up with a lot of loose pucks. They had a couple of other opportunities where they could have had more success on the power play. But I think when you have two good units – (Kopitar’s) group has been really coming along lately, I think when you have two groups like that, I think it can really help you and give you a little bit of a different look in terms of personnel and Dion’s been a good fit there. He wants to shoot the puck all the time. He’s always looking at the net and I think he’s got people going there because they know the puck’s going to go there.

On Darcy Kuemper’s play:
I thought he was terrific tonight, especially early. I thought they had some opportunities with their tight (inaudible) plays below the goal line. I thought he was terrific and really looked solid in the net. So it’s a credit to him. He really does a good job of getting himself ready to play, knowing that was going to be a tough game and knowing we were going to need a big effort from our goalie.

On what Anze Kopitar means to the Kings organization:
I think you guys know how I feel about (Kopitar). He’s a just World Class player and he’s a World Class person. He just does everything well. He cares as much about his defensive responsibilities as he does about the points. He’s your most committed defensive guy and you cannot describe a situation in the game where you don’t want him going out in, so he’s a terrific player. He’s got a great career to this point but I think he’s got lots of runway ahead of him, so I’ve said this before, if I was building a team he’d be the first guy on it.

On if the Kings have ‘turned a corner’ in the playoff race:
I think we’ve turned a corner for a while now. I think we’ve had ups and downs in our season but we knew this was going to be a tough trip. We had a back-to-back on the front-end and a back-to-back on the back-end and we were playing a lot of really quality teams that are all fighting for a playoff spot. We knew there was not going to be any easy games and we knew we needed a really good contribution from everybody in our lineup and we were able to get that.

On why Torrey Mitchell seems to thrive on Adrian Kempe’s line:
It’s a credit to him. He plays a natural center ice position and we’ve asked him to move to wing and he plays center and wing depending on the situation. He has a lot of speed, Adrian has a lot of speed. (Tanner) carries speed just a little bit different elements where Adrian’s can make plays in the middle of the ice. Tanner’s looking to get to the net and (Mitchell) carries a lot of speed and can help in the faceoff circle. Those guys are excited about playing together and they’ve really helped us.

On the mindset with going home and having to play Dallas on Thursday:
Sometimes you come off the road and you’re looking to exhale and relax and there’s not time to do that. If you look at our schedule, it’s day off, play, day off, play, back-to-back, day off, play, day off, play, day off, play so it’s almost a playoff type schedule where you’re playing games so it’s really important that guys get their rest in preparation in terms of the number of games we have, a lot of it’s going to have to be mental and make sure our guys get the rest and getting ready to play. And the guys have done a good job of it. I think the addition of Dion and (Thompson) to the guys we already have here is only going to enhance our ability to be prepared with the schedule the way it is and we’re looking forward to getting home and playing in front of our fans at home.