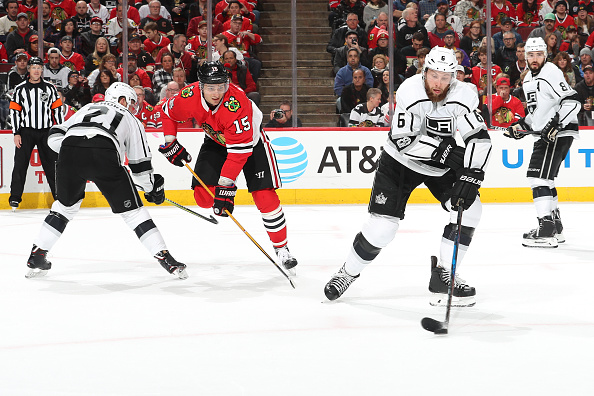 The Kings went through a full morning skate at United Center earlier today in advance of their 5:30 p.m. (Pacific time) faceoff against the Chicago Blackhawks and showed the following lines:

Goaltender Jonathan Quick was the first netminder off the ice, indicating that he will start this first game of this back-to-back. The Kings will play at the Winnipeg Jets on Tuesday. Defensemen Paul LaDue and Kevin Gravel along with forward Michael Mersch stayed on the ice for extra work, as did goaltender Darcy Kuemper. This would mean that LaDue, Gravel and Mersch are likely scratched for tonight.

It feels like there’s a little more to games when these two teams face each other mostly because the Kings and Blackhawks played one another in the Western Conference Final in 2013 and 2014. Also both organizations alternated Stanley Cups from 2012 through 2015.

“Once you see each other night in and night out you kind of get that rivalry aspect to the game so it’s almost like in those days, it was like a chess match trying to figure them out and them trying to figure us out and it just came down to will and determination at the end of it,” Kings defenseman Jake Muzzin said.

Muzzin noted that tonight’s game should have some similar passions to a postseason contest. The Kings have 67 points and are four points out of a Wild Card spot and two points out of the final playoff spot in the Pacific Division. The Blackhawks have 58 points – 13 points out of the Wild Card.

“Two points is huge for both teams and I would imagine it would be kind of a playoff atmosphere tonight,” Muzzin said. “I think we’re ready for it.”

Kings forward Dustin Brown spoke about an incident at a Blackhawks home game against the Washington Capitals on Saturday when fans directed racial taunts and abuse at Capitals forward Devante Smith-Pelly. The fans were kicked out of the game and the Blackhawks and Capitals along with the NHL made strongly worded statements condemning the actions of the fans towards Smith-Pelly.

Brown is the Kings’ “Hockey is for Everyone” month ambassador. The message of the month, promoted by the NHL, is one of diversity and inclusion in hockey. This is the second straight year Brown has held the role.

“I think all parties handled it pretty well. It’s an unfortunate situation but unfortunately we live in a world where there are people that are ignorant so,and I don’t think there’s ever going to be a world where we don’t have people that are ignorant on certain issues. It’s just … human, you know. You can talk about what’s right and wrong but at the end of the day I think it was the response, how the Blackhawks handled it, how Washington, how the league handled it, how Smith-Pelly handled it was … I think that’s what we should be focusing on,” he said.

– With the Kings playing a back-to-back scenario, it seems likely the team would start Kuemper against the Jets on Tuesday. Stevens wasn’t asked to address his starter for the next game, but when asked about Kuemper, he displayed a high amount of confidence in the netminder.

“He has been terrific. He has played really well. He has actually come in in relief a few times and played really well. He does a really good job of getting himself ready to play and he has won big games for us,” Stevens said. “He has played in other situations, not just back-to-backs, but he has played in situations where he has come in and given us a chance to win. There have been games where he has been the first star when he has played so I think in the last few years here we’ve had very little success winning games with the backup goalie in the net and I think he has come in and done a really good job for us.”

– The Blackhawks traded defenseman Michal Kempny shortly after their morning skate, to the Capitals for a 2018 third-round draft pick. The 27-year-old Kempny had played 31 games for Chicago and notched seven points and a plus-13 rating while average 15:19 of action.

– Here’s where you can buy tickets to LA Kings Beer Fest this upcoming Saturday before the team’s home game against the Edmonton Oilers.

Saturday, March 17 against the New Jersey Devils is also a Beer Fest game.