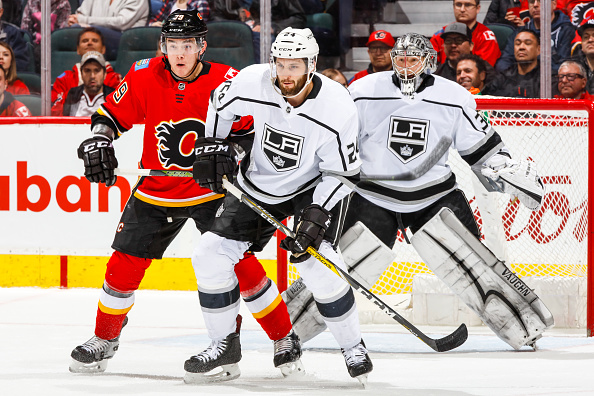 When Derek Forbort stops an offensive opportunity he feels a bit of a rush similarly associated to when he shoots the puck and it goes in the back of the opposing net.

“I think I kind of get that goal scoring feeling whenever I kind of get a good pokecheck and get the puck going the other way and make a good outlet pass,” Forbort said. “Those are the things that I love doing and it’s an easier game when it’s working.”

In his second full season with the Kings, the 25-year-old Forbort has established himself as a defensive stopper and a player who can be a legitimate complement to Drew Doughty on the team’s first pair if he’s placed with Doughty. Forbort has averaged 21:08 this season and notched a plus-14 rating. His 2:51 of penalty kill ice-time ranks second amongst Kings defensemen behind Doughty.

“I think Forbs has turned into an amazing player,” Doughty said. “I don’t know if everyone realizes how good he is at defense. He’s like amazing at defense, he really is.”

The Kings brought up Forbort in the 2015-16 season for 14 games and kept him with the team for all 82 games last season. In 2016-17 he mostly played with Doughty because in part it seemed the 2016 Norris Trophy winner would help Forbort’s game. Doughty did help with Forbort’s development but along the way the two found chemistry as Forbort, a 2010 first-round draft pick, used his defensive nature to enable Doughty to roam if needed.

“This it not to say we all don’t want the puck but it’s no secret that (Drew) can control the game and he wants the puck and he wants to be making plays and I think Derek really complements that,” Kings defenseman Alec Martinez said. “He’s sound and that allows (Drew) to take maybe a little more chances on the offensive side of the rink. When you look around the league and look at us in the past that’s kind of the combination that you look for is you want a really talented puck-mover with someone that can hold the fort and I think when we’ve been successful as a hockey club, we’ve had pairings like that.”

Forbort’s emergence has a lot to do with his hard work, as well as the Kings development staff’s ability to figure out the best way he could impact a game. Generally first-round picks make the NHL sooner than five seasons after their draft year, but the organization was patient with Forbort as both he and the team tried to figure out his game.

“He has used his time wisely to put in the time to become a better player. I think the big thing with Derek coming out of school was he wasn’t quite sure what kind of player he was. We weren’t sure if he was an offensive player. We weren’t sure if he was going to be a shutdown guy and I think through his development he has a real, clear identity as a player now of what we just talked about,” Kings Coach John Stevens said. “We still think he needs to help us by getting pucks to the net and being involved in the rush but he’s going to be a shutdown guy first. I think he has really embraced that role.”

Forbort said he used to watch video with Senior Advisor to the General Manager/Development Mike O’Connell to get a better handle on his game. This paid off as he started to better understand his strengths at the pro level.

“He helped me a ton. I think like in college I was kind of more all over the place, now I’m more ‘still’ out there and it just kind of makes the game easier,” Forbort said. “You’re not running around. You’re not out of position all the time, so it’s just kind of slowing my feet down and being in the right position.”

Because of all his hard work, Forbort now knows how better to use his 6-foot-4, 215-pound frame to get good body position on his opponent. He also can use his stick to stop offense.

“I think he’s got the best stick on the D core,” Kings defenseman Alec Martinez said. He breaks up a lot of plays with his stick and part of that is – it’s oftentimes in the lane and it’s in the lane because he’s in position.”

Added Martinez, “He’s very sound defensively and he’s really smart back there and saying that he has a really good stick, that’s not to take away from his ability to physically break things up. He’s a physical guy and he’s a huge asset to our D corps.”