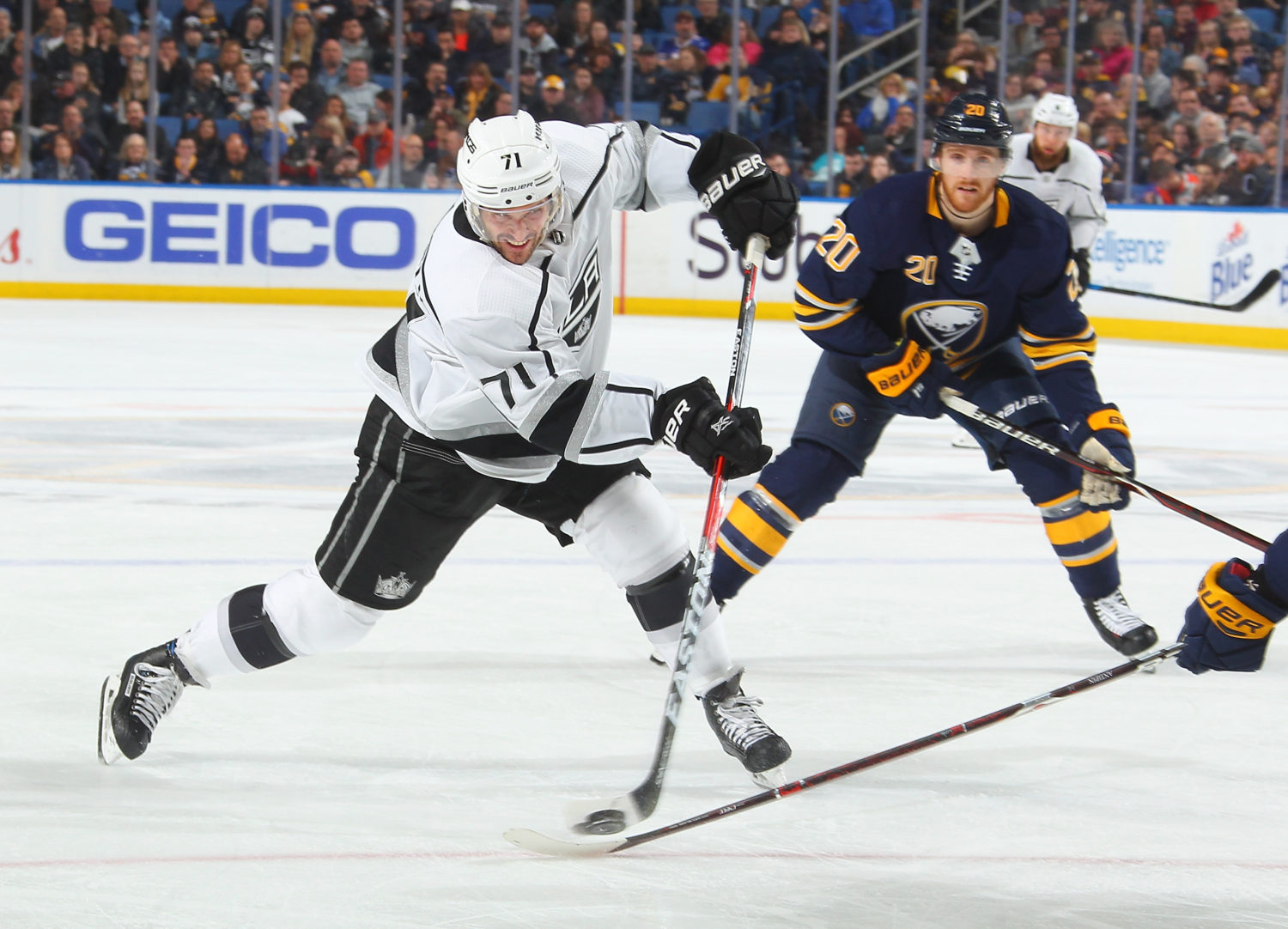 Anze Kopitar, on breaking “the curse” after not winning in Buffalo for fifteen years:
Well it feels good. I don’t think we were worried about the fifteen year drought in here, but we had a pre-game slide that we certainly wanted to stop and I thought today we came in here and we were ready to play. I think in the end we made it a little bit too interesting for our liking, but it is what it is. I think the guys battled hard, obviously getting the first goal and then following it up with a few more. I thought it was a pretty good game on our part.

Kopitar, on how scoring the first goal enabled the team to play their type of game:
Well, I don’t think we were really looking for a reaction. Obviously you’re trying to get the first goal, but I think our second period was huge. Not just getting the three goals, but just dictating the game and not sitting back. Just kind of putting our mark on the game and that was certainly nice to see.

Kopitar, on what Alex Iafallo brings to the team:
He’s a hard worker. He skates really well, he’s making plays, his forechecking ability is very good. So it’s actually very easy to play with him because he’s very predictable and he has been ever since the start of the season. So it’s very nice to play with him.

Kopitar, on getting a couple points closer to a playoff spot:
You know, coming out here bottom line is we have to take care of our own business. If we get a little help from the teams around the league, that’s fine, we’ll certainly take that. But we’ve got to win our games. So I thought, again, tonight was a step in the right direction and we’ve got to continue going.

Alex Iafallo, on whether playing in Buffalo brought back a lot of memories:
Yeah, we had just a quick practice yesterday and just stepped on the ice and it gave me a lot of goose bumps, especially in warm-ups too. You know, you always dream of playing in your hometown, and seeing everybody in the stands– it’s a pretty special feeling.

Iafallo, on getting an assist and ultimately winning the game with his family there:
Yeah, I got the assist there and my buddy’s in the corner, I think it was right by the Zamboni door, and I just kind of looked at him for a second and it was a pretty cool feeling. And nice play by Brownie getting me that puck and just had to get it to Kopi there.

Iafallo, on whether he had a lot of family and friends watching in the stands:
Yeah, there was a lot of people and I’m definitely thankful for them. I’ve got a lot of people from my hometown of Eden and, you know, all my friends and family obviously came and it definitely gives you goose bumps. You know, you always dream of that, so I’m very thankful that they came to support me.

Iafallo, on playing big minutes and taking an important role on the team:
Everything kind of came into place and I could thank a lot of people that obviously helped me along the way. I had a good summer and I came into training camp just having a hardworking mindset and just playing my game and everything worked out great. So I’ve just got to keep doing my job and keep staying positive.

Iafallo, on if he expected so many people from his hometown to be there:
I didn’t expect it would be that big, you know? I always saw new faces every time I looked in the crowd and it’s a very special feeling. And I can’t be thankful enough for everyone that came out and all the support, even throughout the whole season and throughout my whole career.

Iafallo, on whether his teammates ribbed on him for his “cheering section”:
They were just messing around. You know, it’s a pretty fun time and I’m excited we got the win here in Buffalo.

Iafallo, on if he saw who was holding up the “Eden loves Iafallo” sign:
Yeah, some of my teachers from high school came from Eden. Like I said, every time I looked in the stands I saw someone, an old friend or an old family member, so it’s a very cool time here.

Amadio, on what scoring the first goal did for the team’s momentum:
It was definitely good to get that one. It kind of gave us a little bit more energy. I thought we played a really, really good first period there.

Amadio, on what he saw on his second goal:
The one d-man was, I think, turned around, so I tried to use him as a screen and get it on net.

Amadio, on whether it feels good to break the three-game losing streak:
Yeah, for sure. We knew we had to come out hard and I thought we had a good first period there. And then we just kind of built off that going forward and it was definitely nice to break the three-game losing streak. We’re just looking to continue the win-streak going forward here.

Amadio, on whether the team feeds off Kopitar when he’s playing as well as he is:
Yeah, definitely a lot more energy for us guys, you know? Two nice goals by him there, great plays by that line. But I thought we had a really good team game today. Everyone was battling and everyone was working.

Amadio, on what he was doing in 2003 when the Kings last won in Buffalo:
I don’t know. I was only six or seven years old. So I was probably on the outdoor rink maybe in my hometown.

Amadio, on if he ever played at KeyBank Center:
I think I might have had a summer hockey tournament here once, but no, I’ve never really been to Buffalo.

Amadio, on if the guys were giving Iafallo a “hard time” with all the fans here:
Yeah, it was nice to see all the fans coming to support him. Hometown kid. You know, he was really excited to play tonight.