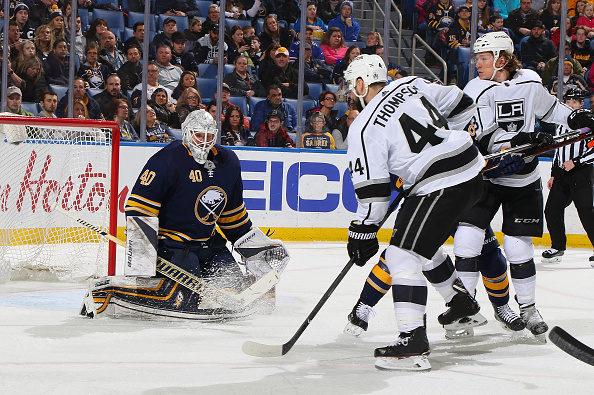 – The Kings beat the Sabres in Buffalo for the first time since Feb. 21, 2003. This broke a eight-game losing streak at the Sabres.

– The Kings improved to 18-9-1 against the Eastern Conference and 11-4-0 against the Atlantic Division this season.

– Forward Anze Kopitar now has 799 career points after his two-goal performance Saturday. He has six points (four goals and two assists) in five games on this road-trip. Kopitar ranks fifth on the team’s all-time points list, 19  behind Wayne Gretzky for fourth.

– Dustin Brown notched two assists to reach the 40-point mark. It’s the first time he has reached at least 40 points in a season since 2011-12 when he had 54 points.

– Jonathan Quick broke a three-game losing streak, stopping 33 of 35 shots on goal. In his last five games he has a .930 save percentage

– Forward Alex Iafallo notched an assist in his first NHL game in his home area. Iafallo is from nearby Eden, N.Y.

– Forward Andy Andreoff’s assist gave him four points on this road-trip – all assists.

– Defenseman Drew Doughty notched his 33rd assist of the season in his 58th game, besting his total of 32 assists he reached in 82 games last season.

– Forward Michael Amadio had his first two-goal game of his NHL career. It was also his second multi-point effort.

– In his second game with the Kings, defenseman Dion Phaneuf was plus-2 and played 14:18.

– Forward Nate Thompson played 15:51 and won nine of 14 faceoffs in his second game with the team.

– Forward Jonny Brodzinski notched an assist and has three points on this road-trip, two goals and an assist.

– Sabres goaltender Robin Lehner allowed four goals on 30 shots on goal by the Kings. He was pulled after the second period. Chad Johnson relieved Lehner and stopped all six Kings shots on goal in the third period.