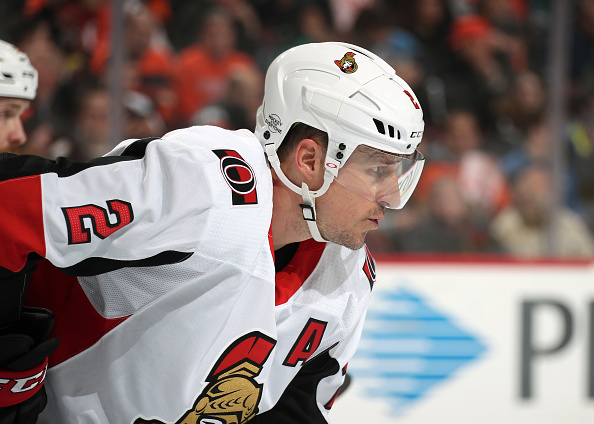 Defenseman Dion Phaneuf met with the media after he was traded to the Los Angeles Kings on Tuesday along with forward Nate Thompson for forwards Marian Gaborik and Nick Shore.

Phaneuf was reportedly pulled from his team’s game at the Pittsburgh Penguins so the deal could be finished.

The Kings play at the Penguins on Thursday and Phaneuf will not have to travel to meet the team. Thompson did not play in the game at Pittsburgh.

On his emotions on the trade:
To be honest with you, I want to thank the Ottawa Senators organization for my time with them. That’s first and foremost. I really, I’ve got nothing but great things to say about the city of Ottawa, about the organization and about my time here and it’s disappointing when you do get moved, but with saying that I’m very excited about where I’m going, to the team that I’m going to and to be a Los Angeles King. I’m really, I’m honored to be going there. I’m excited about the team they have, where they’re at in the standings and I’m going to go there and do my best to do whatever I can to help their team.

What was the feeling when he was told on the bench about the trade:
I wasn’t told right then but I had an idea and then obviously in between periods there’s the business side of things where the trade call had to go through and stuff, so I just, I really, like I started first, I wanted to really thank the Ottawa Senators, the organization and my teammates. They’ve got a really good group of guys here. What we went through last year, I’ll never forget that as a player. I’ve got fond memories of playing in Ottawa but now I’m excited to be going to the Los Angeles Kings. It’s going to be a real, good experience for me to join that team. I’m looking forward to doing whatever I can and to play the style that I have to play to help them be successful.

On the run the Senators went on last spring to the Eastern Conference Final and being traded next season:
It was something that I’ll always remember, the run that we went on and as a player those are what you play for. You want to have success. You want to go on those runs. You want to have a chance and right now I’m going to a team that’s won, that has had a lot of success and I just want to go there and do everything I can to help that team. I’m very, very excited about where I’m going. Right now it’s a lot, to be honest with you, standing here. There’s a lot of different emotions but for me I’m really excited about where I’m going and it’s an exciting time for me to think about being a Los Angeles Kings.

On being closer to his wife, actress Elisha Cuthbert:
For me personally with her there (in LA), for me personally it is a good situation. The business is the business and for me it’s a business decision that the Ottawa Senators wanted to move me. And I accept that. I have nothing but positive things to say about the organization and the team and my time here.