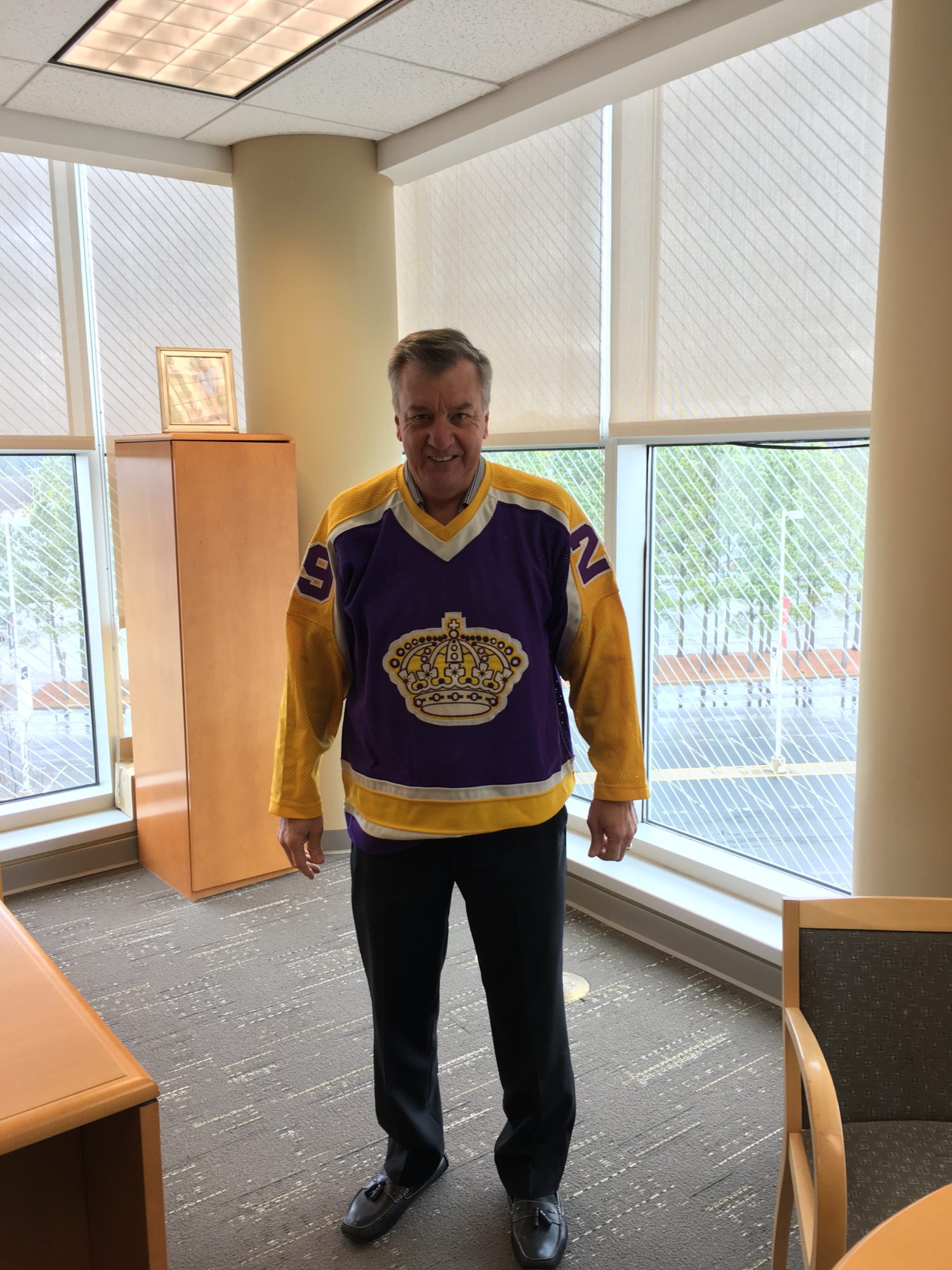 On Christmas Day about 10 years ago, Don Waddell said he had tears in his eyes after he opened up a gift box and saw his 1980-81 Kings jersey.

Waddell, now the Carolina Hurricanes Team President had only worn the jersey once in game action and the mere sight of it, after thinking it had been lost forever, brought out all sorts of emotions for the hockey lifer.

“I was in shock like ‘what is this?’” Waddell said from his office at PNC Arena. “I couldn’t really remember the exact jersey, how it looked and felt and everything.”

The story of how Waddell got the jersey he wore for his only NHL game, which was between the Kings and New York Rangers on Jan. 28, 1981, is an example of the smallness of the hockey world. USA Today was first to write about how Waddell found the jersey.

Waddell said his wife had been searching for the jersey for a couple of years when she decided to call Kings Senior Advisor Jack Ferreira, who had worked with Waddell when Waddell was the General Manager of the Atlanta Thrashers.

Ferreira was able to locate the jersey, which enabled Waddell’s wife to get it in time for Christmas.

“I think she knew Jack obviously from working with me and somehow I don’t even know how the connect was made because she never asked me for Jack’s number or anything,” Waddell said. “I’m sure she tracked down Jack’s cellphone number and called him but it was in the works from what she said.”

Waddell, a defenseman, can remember several details from the game, specifically his first shift when he said he collided with blue line partner Jerry Korab, which allowed New York defenseman Ron Greschner to score a goal on Kings goaltender Mario Lessard.

“I actually had a picture and I have it some place, where I’m actually laying on the ice looking back at Mario Lessard as Greschner scored a goal,” Waddell joked.

He also remembered how he left Saginaw, Michigan, where he was playing at the time, at 6 a.m. the morning of the game, flew to Los Angeles, arrived at noon and was ribbed when he got on the ice for warm-ups by Rangers defenseman and former college defense partner from Northern Michigan University, Tom Laidlaw. Waddell said Laidlaw wasn’t aware his friend had been called up to the NHL and was surprised to see him.

“He said ‘what the hell are you doing here?’ I’ll never forget that,” Waddell said. “Just reflecting back, we still are good friends but to play that one game against a team that had my old teammate and defense partner for four years was also very special.”

Waddell was hopeful he would see more action, but after that game he continued to get scratched. He still kept his dream alive that he would return to the NHL, but several years later when he was playing in Europe he started to understand that he probably wouldn’t have that opportunity.

“I said, ‘you know, that’s probably the only game I’m ever going to play in the NHL,’ so I remember it,” Waddell said. “A lot of people say ‘it’s one game’ but it’s one game more than thousands and thousands of other people that are trying to make it to the NHL.”

Waddell has a long and distinguished career in hockey – including winning the 1998 Stanley Cup with the Detroit Wings as the team’s Assistant GM along with his work with the Thrashers then with the Pittsburgh Penguins as a scout and now with the Hurricanes. But according to Waddell nothing he has done in his life in hockey compares to his only NHL game.

“I think it has to sit at the top of the list,” Waddell said. “You work you whole life of youth hockey, I was fortunate enough to go to college and play college hockey and then you get the opportunity to turn pro and actually as a kid you dream about playing in the NHL, I did anyway. As a player to sort of have that one opportunity to dress up in a regular season game, to me, that memory’s never going to be erased.”