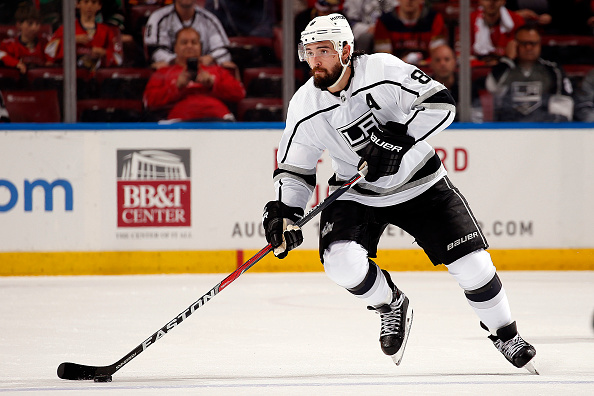 The Kings worked out off-ice this morning at Amalie Arena in advance of their game at the Tampa Bay Lightning tonight. Though the NHL schedule says the game is at 4 p.m. Pacific time, it’s actually supposed to start at 4:50 p.m. This is because of Vincent Lecavalier’s number retirement ceremony.

Lecavalier played 1,037 games with the Lightning, notched 874 points and won the 2004 Stanley Cup.

Lecavalier played for the Kings for 42 games in 2015-16 after he was traded to Los Angeles from the Philadelphia Flyers. Lecavalier had 17 points with the Kings and helped solidify the team’s lower line center depth. Plus his overall outlook and professionalism was refreshing for the group that year.

“When he came to LA it was all class,” Kings captain Anze Kopitar said. “I don’t think he really had a bad day, not that we would notice. He always came in smiling. I know he had a bit of a rough patch in Philly where he didn’t play so coming to LA was a big breath of fresh air for him and he made the most of it. What was really nice to see obviously, he made our team better. It was his presence in the room, his energy and then his play on the ice. He definitely helped us.”

– This game features two of the top defensemen in the NHL between Lightning blue liner Victor Hedman and Kings defenseman Drew Doughty.

Doughty leads defensemen in ice-time per-game at 27:01 while Hedman ranks seventh at 25:31.

“Every team’s got superstars but usually they’re of the forward variety and to have two of the top defensemen … it was great All-Star Weekend, it was the first time I got to meet Drew and be around him and see what his personality is like, which is very similar to how he plays the game,” Lightning Coach Jon Cooper said. “For me, I get to see him only twice a year and I know every time he steps on the ice, I’ve got a little worry of ‘hopefully he doesn’t do something to hurt us’ and I’m sure (Kings Coach) John (Steven’s) got the same feeling when Hedman gets on the ice. But in the end you take a step back out of the game and the competitiveness and you just get to marvel at two of the best defensemen that are playing in their generation and it’s fun to watch.”

– There was no official update on Trevor Lewis’ status this morning at Kings media availability. Lewis crashed into the boards behind the Panthers’ net following a check from forward Jared McCann with 4:26 left in the Kings’ 3-1 win at Florida on Friday. Lewis left the game after the play

After the game, Stevens was cautious on Lewis’ status but said he thought the forward would be OK.

– Stevens is scheduled to meet with reporters at 2 p.m. Pacific time today for his pre-game media availability.

– Kopitar also spoke about the road-trip and a few other topics surrounding the Kings.

On being better against the Lightning than the first time they played each other in Los Angeles — when the Lightning won 5-2 on Nov. 9:
It has been a little while ago but I don’t think we took care of the puck all too well in LA. They had quite a few odd-man rushes so obviously we have to do a better job of that. I think their power play is their source of confidence and they’ve been scoring a lot on it so we have to make sure that we move our feet and stay out of the box as much we can and then just go from there.

On the mindset of the team after winning the first game of this trip:
It’s great. I mean you always hear guys say it, ‘you want to start off the road-trip on the right foot’ and I thought last night was good. Sometimes the games like that are not that easy where you come all the way from the West Coast and come here and the time difference and everything. Maybe the guys aren’t sleeping that great so it was huge for us so we’re going to look to do more of the same tonight and keep it going.

On if that game helped get them get engaged in the trip:
Yeah, the big thing last night was just talking about not waiting for stuff to happen but really go out there and engage. I know we got scored on fairly early in the (first) period but I thought we were still playing our game which was really nice to see and then eventually we got a couple of goals and really pulled away.

On if the Kings are playing at a faster pace this season:
Yeah, I think so. I think we are playing faster. I think that there’s more creativity to our game and just the personnel too made it faster. It has been a bit more fun.

On the entire team clicking and if there was a turning point recently:
During the slide that we had, we talked about it, it’s very hard for just a few guys to pull the ship. You need everybody nowadays. You look at all the good teams in the league, the playoff teams, they have balanced scoring. They have just contribution from every, single guy up and down the lineup. We didn’t have that before per se but now with (Shore) coming into the lineup and getting a goal and (Brodzinski) getting a goal, it’s very nice to see that guys are starting to make plays and gaining some confidence in the process because confidence is a funny thing. When you’re playing with confidence everything seems a lot slower and you’re more relaxed and you’re just making plays that maybe sometimes where you’re squeezing the stick you don’t normally, so it’s very nice to see.