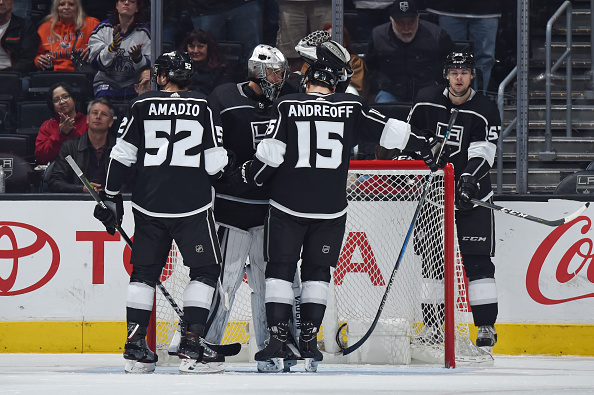 – Wednesday’s 5-2 win marked the 12th consecutive win against the Oilers on home ice for the Kings. During that streak, the Kings have outscored the Oilers by a combined score of 57-21 (including one shootout win for the Kings). Edmonton’s last win in Los Angeles was on Nov. 3, 2011. The 12 game streak is the longest home winning streak for the Kings against any team in the NHL in franchise history.

– Drew Doughty (0-2=2) tallied his 300th assist and 400th point of his NHL career on his first assist of the night. He is just the second Kings defensemen to reach those milestones (also Rob Blake).

– Paul LaDue (1-0=1) scored the second goal of his career (first PPG). Both of his career goals have been the game-winning goals).

– Adrian Kempe (1-0=1) scored his 16th goal of the season (tied for fifth among league rookies and tied for third on the team).

– Alex Iafallo (1-0=1) tallied his sixth goal of the season and has a goal in each of the last two games.

– Kyle Clifford (1-0=1) registered his second goal of the season.

The Kings will travel Thursday to Sunrise, Fla. for their Friday game at the Florida Panthers.